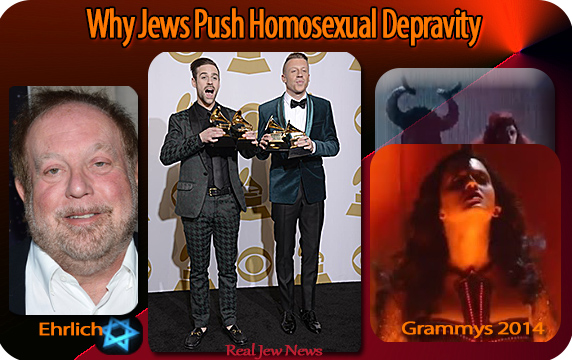 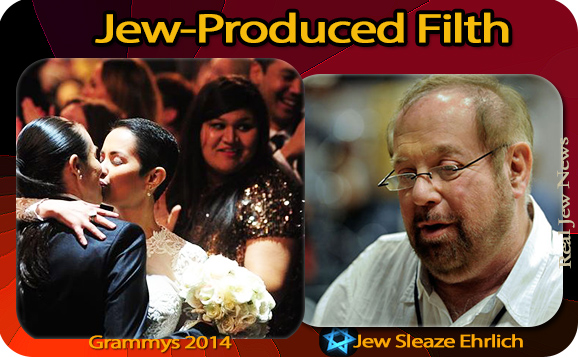 JEWRY’S MUSIC ELITE united together in their slavish promotion of “marriage equality” for this year’s Grammy Awards.

Grammy’s Jew producer, Ken Ehrlich, hyped this year’s depravity fest with “All things are possible on the Grammys. It’s what we do, one of the trademarks of this show.”

All things are indeed possible when it comes to promoting degenerate lifestyles and occult sorcery in the name of ‘entertainment’ when amoral Jews like Ehrlich are at the helm.

Perversion and demon worship is good business for Jews! 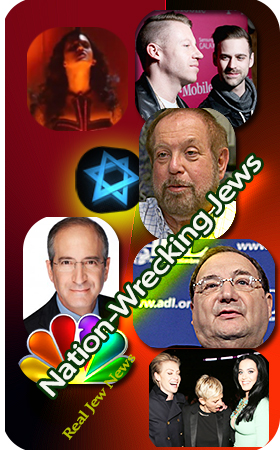 The stage was set neon church style while Macklemore & Lewis belched out “Same Love” which is known as the ‘gay rights anthem.’

Jew producer Ehrlich, noted by the Jew York Times for orchestrating every detail of the Grammys, also barfed up an occult performance for singer Katy Perry.

Jews control all sides of these parades of degenerate filth which they promote.

At least one Christian in the audience rejected Jewry’s nation-wrecking filth.

Christian singer Natalie Grant walked out of the Grammys knowing she was witnessing a celebration of perversion and satanic ritual.

“We left the Grammy’s early, said Natalie. “I’ve many thoughts, most of which are better left inside my head.”

No Natalie, those thoughts instead should be stated boldly if you really have faith in Christ as you claim.

DO YOU THINK Jews will be content to tone down their nation-wrecking agenda?

With each passing day they dig deeper into new depths of evil. They’ve been allowed to come way too far to stop now. It’s not in a Jew’s obsessive nature to be able to stop.

Productions of ritual sacrifice, bizarre sex acts, bestiality, and pederasty are on Jewry’s agenda. Even now, Jew-owned NBC is about to launch a follow-up to its homosexual “The New Normal” with Jew-writer Liz Feldman’s lesbian show, “One Big Happy.”

Once God’s law is scorned to embrace homosexuality, all devilish options are on the table.

But Christ will not be mocked and judgment comes to any country that sells out their last shreds of morality and decency at the altar of Jew-produced filth.

If the JEWS are NOT STOPPED NOW then America is toast.