Who Said: ‘The Jews Are Our Misfortune?’ 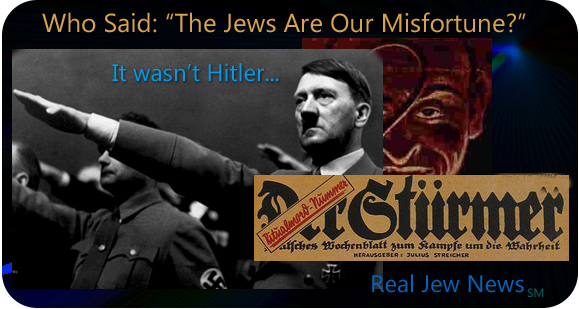 Who Said:
‘The Jews Are Our Misfortune?’ 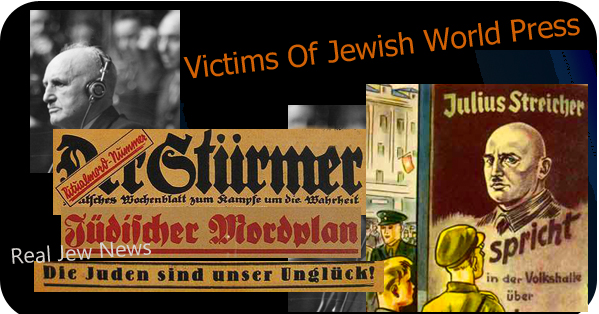 “Die Juden sind unser Ungluck!” was a slogan, (a quote actually), printed on the bottom of the popular Third Reich newspaper, Der Sturmer.


Translated, the slogan states, “The Jews are our Misfortune!”

Der Sturmer was published by Julius Streicher from 1923 to 1945. The paper was endorsed by Hitler as a useful tool for influencing the man on the street. Yet still, neither Hitler nor Der Sturmer were the authors of the slogan.

After the war, Streicher was tried and hung at the Nuremberg trials for “crimes against humanity”—translate—”criticizing the Jews.” And the Jews got him “hung from the gallows” simply for publishing the paper.

In 1935, Der Sturmer published the article, “How the Jew Hates the Sturmer.” Excerpts from its opening lines describe why Jewry feared the paper: 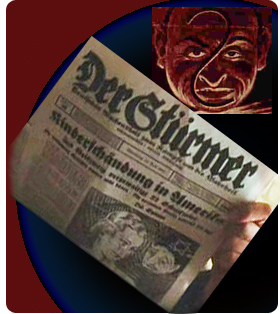 “The Sturmer is a guide to the solution of the Jewish Question. A fearsome accuser of Pan-Jewry.

Over the last decades our thinking fell victim to the poisoning of the Jewish world press. The Jew even silenced the voice of German blood. Our people stood before the abyss of a complete lack of judgment.

This is why the Sturmer keeps saying: ‘The Jews Are Our Misfortune!’ This is why it is so hated by the Jews. Everyone knows that the Jew only fights that which he fears. And he fears the Sturmer in the depths of his soul!” View Entire Story Here.

The article points to the dominance of Jewry over the media both in Germany and beyond its borders.

And in stating that the masses had fallen “victim” to the poisoning of the Jewish world press and “stood” before the abyss of complete lack of judgment, the paper was unknowingly auguring a warning for future generations.

“The Jews are our Misfortune!” was originally put forth by Heinrich von Treitschke (1834-1896), a Professor of History at the University of Berlin and admired for his penetrating analysis of German political life.

His greatest achievement was his multi-volume, “History of Germany in the 19th Century.”

In his University lectures, political essays, and even in his History of Germany, Treitschke expressed disdain for the Jews.

In 1880, he published a pamphlet entitled, “A Word About Our Jews,” which enjoyed much popularity. In this pamphlet the assertion, “The Jews are our misfortune,” first appeared.

Although to this day Jewry labels Treitschke as an “anti-Semite”… yet with astonishing prescience in sketching the Jewish problem of his day Treitschke shadowed forth the Western world’s current plight: 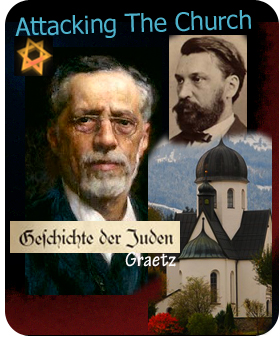 “The influence of Jewry on our national life nowadays shows itself in many ways harmful.

Just read the History of the Jews by Graetz. What rage against the ‘arch-enemy,’ the Christian Church!

Most dangerous is the preponderance of Jewry in the daily press. Their anti-Christian defamations and blasphemies are shocking.

Scarcely was emancipation achieved before Jewry demanded parity in everything. They refuse to see that we are a Christian people and that they are only a minority among us. We have experienced their demands that Christian images be set aside and that their sabbath be celebrated in mixed schools.

An evil that everyone felt but no one wanted to touch upon is now openly discussed. Among educated men who reject any idea of church intolerance there rings with one voice: ‘The Jews are our misfortune!’” View Entire Story Here, Here & Here.

A SPIRITUAL DEVASTATION is now wreaking havoc in what formerly was known and experienced as “Christendom.”

In a newly published book, “Coming Apart: The State of White America,” the white working class is shown as no longer clinging to religion but letting go of everything that once distinguished it.

This is surely due to Jewry’s control of the media where defamation of the Church is rampant. The Jewish-produced sitcom, “Good Christian Bitches,” is just one example of Jewry’s ridicule of Christianity.

Could it be true then—that even today—the Jews are our misfortune?