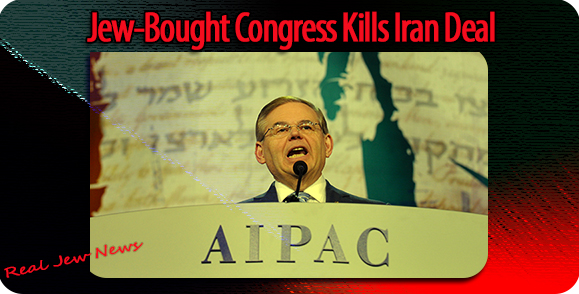 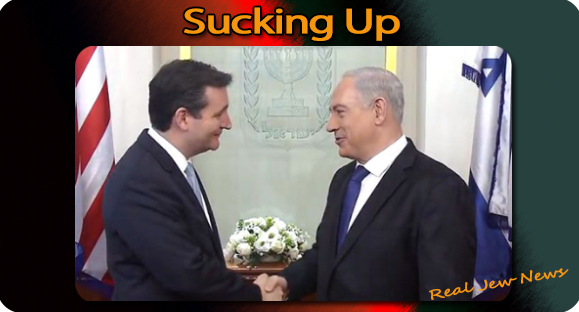 THE BUYOUT OF THE US CONGRESS by American Jewry is now complete. Jews own Capitol Hill and even holdouts like Rand Paul are folding.


In an effort to sabotage peace with Iran, AIPAC’s Senator Schumer and Jew-bought hacks: Menendez, Kirk, and Cruz are sponsoring the Jew-drafted Iran Nuclear Weapon Free Act about to be passed this week.

The Jew-drafted bill slaps more sanctions on Iran and has majority support of the Senate even though the “majority” of Americans are sick and tired of policy-making to please Jewish warmongers.

On the Republican side of our Jew-one-party-system only Rand Paul and Jeff Flake have yet to sign on to the bill.

But on Friday, Rand Paul signaled he would support the measure. Why should he offend the Jews? How could he ever be president if he doesn’t bow to Satan’s children?

This leaves Flake as the lone Republican who has publicly refused to take a stand on the bill. But if he wants to be reelected then a pact with the Jews insures a continued career.

The other chief Gentile sponsor of the Jew-drafted bill is Menendez who can’t say enough in support of Jewish agendas.

Both Menendez and Kirk were the biggest Senate beneficiaries of ‘Pro-Israel PAC’ campaign cash in their 2010 and 2012 election races.

One wonders why Hispanic Menendez sucks up to Jews so fervently…for it’s contrary to the Latin character to kiss the arses of Jews.

Perhaps a BLACKMAIL deal was struck between democracy-killing JEWS and Menendez?

If the Jews got the goods on you then why should they let a serious scandal go to waste? 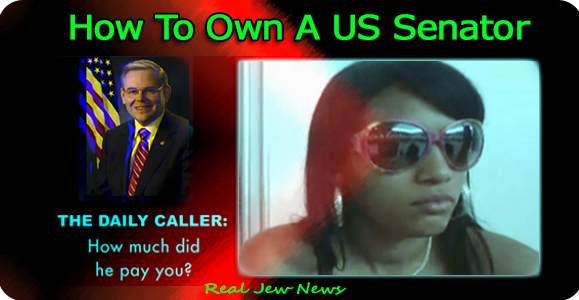 JEWS GET THE GOODS ON MENENDEZ

OWNING A US SENATOR in one easy blackmail is what our ‘civilian-controlled democracy’ is all about when it comes to foreign policy.

Where did Bobby Menendez “screw” up that he should be caught in the lair of Jewish vampires who run our ‘republic?’

While under investigation in early 2012 for fornicating with under-aged prostitutes in the Dominican Republic suddenly Bobby becomes Gentile window dressing for the Jews.

Leading a group of Jew-bought Senators in June 2012, Menendez was the primary signer of a Letter To Obama urging him to forgo negotiations with Iran.

Four months prior to Menendez signing over his soul to Christ-crucifying Jews, an American escort revealed that Menendez was a “regular client”…a “serial hobbyist” who “sees lots of girls” for paid sexual trysts.

The plot thickens with big Jew money at the “climax” of Bobby’s Dominican adventures.

Turns out, the FBI investigation focused on Menendez’s relationship with Salomon Melgen, a wealthy Jewish Florida ‘friend’ of Menendez.

Flying on Melgen’s private jet for weekend excursions complete with a sexy stewardess, Menendez used Melgen’s services for the “fornicating services” of a long list of Dominican Republic’s prostitution cache.

Aided by Melgen’s donation, the super PAC became the largest committee contributing to Menendez’s re-election, spending more than $582,000 on the senator’s behalf. 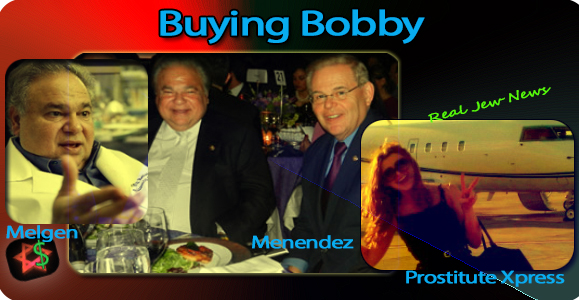 WHEN CUTTING A DEAL WITH THE DEVIL one must weigh whether eternal repercussions should be laid aside for earthly security.

How did Bobby’s penchant for sleeping with young Hispanic girls get him most favored-Goy status with democracy-corrupting Jews?

That’s an easy one! The Jews were hard at work waving their moneyed wands for their latest shill.

The prostitutes making the original claims incriminating Menendez suddenly got a prime time interview with Jew-owned ABC saying they were paid off to make the allegations.

In concert, the DR National Police affirmed this in their own ‘investigation.’ Perfect timing! Perfect bribery!

Then in December 2013 it was publicized on Jew-owned CBS: “No Charges In Prostitution Scandal Against Salomon Melgen.” And so, Menendez got Jewry’s final “cover up” and his political career guaranteed.

BOTTOM LINE: America is NOT a constitutional republic…it’s a Jewish dictatorship.

What can save America? The ballot box? But the Jews decide who you can vote for.

Only a “new Napoleon” can put America back in order.

He’s waiting in the wings just itching to clean house.