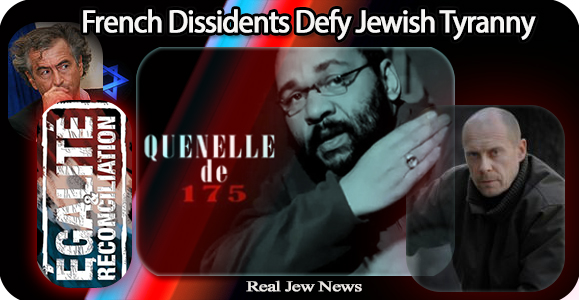 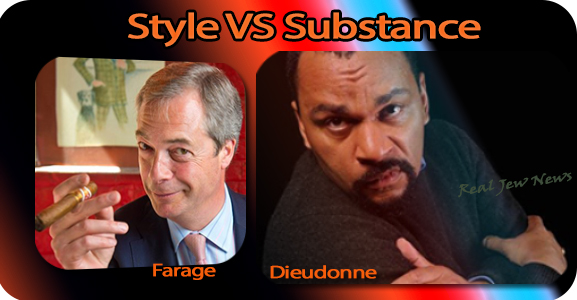 “WE WANT OUR COUNTRY BACK!” barks Nigel Farage of the United Kingdom Independence Party.


“Nothing short of a full, free vote will take our country back,” says Farage.

But who decides what candidates the Brits can vote for?

If it’s the moneyed Jewish Lobby in England—The Jewish Leadership Council and Conservative Friends of Israel—then either party’s candidate will be working for the Jews and NOT the Brits.

If Hague, your foreign policy minister, and Cameron, your prime minister, both appear kissing up to the Jews on the above Jewish Lobbies’ Websites, what chance do you have for a “full” vote in England?

The JEWS decide who you can vote for. Both parties (like Jewmerica) are ruled by JEWS.

So much for Farage “taking back” England.

But the French have a history of making heads roll. 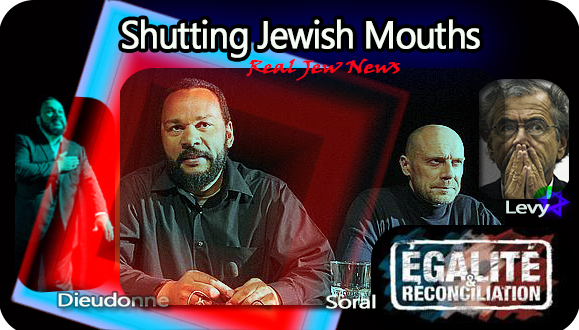 BECAUSE JEWS HATE THEM, two former enemies are now friends.

Both banned from public media, Soral and Dieudo have rallied around the quenelle controversy— (alleged Nazi salute in reverse)—building a political movement which is enjoying spontaneous enthusiasm among the French people.

Called Egalite et Reconciliation, the movement advocates a common cause on issues faced by both French Christians and Muslims.

Both are opposed to homosexuality, (pushed by the Jewish Lobby in France); destruction of the traditional family via same-sex marriage; and imperialism.

In an attempt to stop the movement, French courts have banned Alain Soral from publishing 5 of his books which the CRIF (French version of AIPAC) deems as ‘anti-Semitic.’ (Read: Facts exposing Jewish tyranny.)

In response, Soral plans to publish the Holy Gospels daring the Jews to demand that the ‘anti-Semitic’ passages from the life of Christ be expunged.

And in succumbing to Jewish pressure, (his career depends on Jew-money and influence), French president Hollande has enforced a ban on Dieudonne’s upcoming performances in Bordeaux, Marseille, Nantes, and Tours.

But as the saying goes, they who live by the censors’ sword will die by the peoples’ fury. 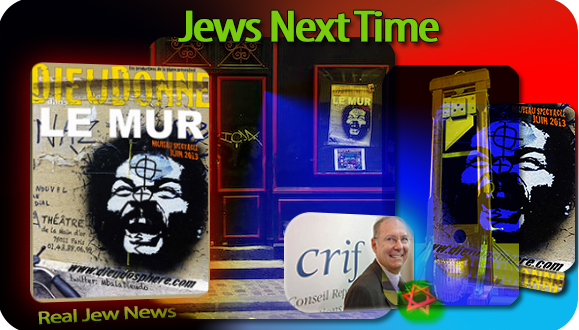 Both organizations are demanding criminal charges be made against these dissidents.

To the Jews’ dismay, this makes the movement even more popular…using the Internet to bypass the Jew-controlled MSM with Dieudo’s Videos showing large, packed theaters of fans roaring with laughter.

While the quenelle gesture means “up yours,” Jews—Bernard Henri Levy at the lead—say it’s a “reverse Nazi salute” that “sodomizes” the victims of the Holocaust. (An example of Jewish hysteria in reverse.)

But the VERY popular Dieudonne is fighting back. Humor targeting Jewish hysteria is erupting into a firestorm. (There’s plenty of Muslims in France with thousands of sympathizers who know how to take to the streets.)

And the French can’t get enough! Watch and Listen Here & Here.

Finally, what the Jews shove up everybody else’s derriere, a grassroots movement in France is shoving it back up the Jews’ backsides.

This time, instead of King Louis XVI, it could be a basketful of Jewish heads.