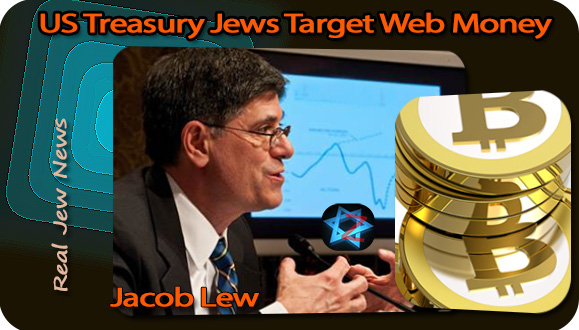 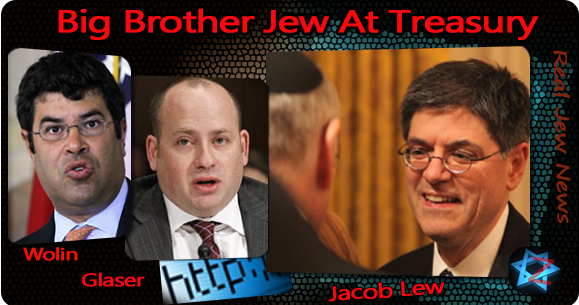 A BACK DOOR INTO INTERNET CONTROL has finally been weaseled into by the Jews at the US Department of Treasury.


For no sooner did the Jew, Jacob Lew, take charge of the Treasury, controlling the Internet became his very first order of the day.

With his fellow Jew, Neal Wolin, Deputy Secretary of the Treasury, along with (yes, Jews) David Cohen/Daniel Glaser, Under Secretaries for Terrorism and Financial Intelligence, Lew decided that money laundering rules should apply to all Web Money…including the growing Internet trading privacy-oriented currency known as Bitcoin.

Glaser, as policy maker for “anti-money laundering,” oversees the Treasury’s Financial Crimes Enforcement Network (FinCEN) which published this past Monday a ‘guideline’ for Internet sites that use virtual currencies such as Bitcoin to comply with the Treasury’s Bank Secrecy Act.

This Jew-inspired ‘guideline’ is aimed at fitting “de-centralized virtual currencies” into the larger regulatory regime under which government-controlled currencies of all kinds are required to operate.

Morgan Peck of Tech Talk explains that the Bank Secrecy Act requires any financial institution that can be defined as a money transmitter to register with FinCEN and help detect money laundering by keeping track of its clients and reporting ’suspicious’ activity.

Those entities that facilitate the exchange of Bitcoins for fiat currency and their online clients will have to take note. Layers of Jewish-tiered bureaucracy, filing, and reporting could soon make Internet trading in virtual currencies a still-born initiative. 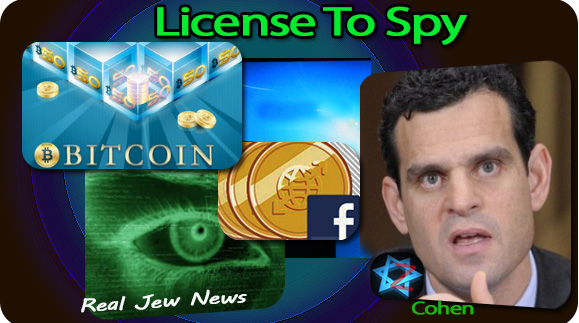 Jon Russell of Next Web observes that just this month, top domain registrar Namecheap decided to accept payment in Bitcoins, while Finnish software maker Sc5 last week began allowing its staff to receive parts of their salary in the currency.

Also on the radar by the Jew-run US Treasury is Facebook Credits, which serves a possible base of more than 1 billion users, as well as Kim Dot Com’s empire of file sharing followers and the popular Reddit site, both using Bitcoin for online transactions.

A further explanation of the Treasury’s ‘guideline’ is outlined by Andrew Leonard of Salon who calls the regulation initiative a “libertarian’s nightmare.” Leonard makes the point that Bitcoin isn’t just an elegant way to create money using peer-to-peer networks and cryptography. Bitcoin is a currency with an ideology.

From the beginning, Bitcoin was envisioned as a form of monetary exchange that didn’t need third-party financial institutions or central banks or even governments to validate it or back it up. 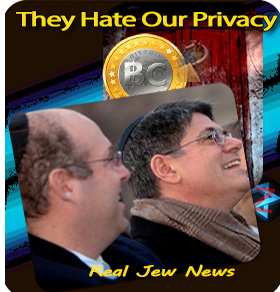 Bitcoin is the fulfillment of a libertarian dream, a currency created out of the workings of the free market, unaffiliated with any state authority, respectful and protective of user privacy and anonymity, and designed to resist inflationary pressures.

By its very nature, Bitcoin is made for people who don’t want other people to know what they are doing.

But if the Jews at Treasury have their way, all who enjoy the use of Bitcoin will soon be deprived of the privacy and anonymity they currently enjoy.

In other words, if it works and it’s good for the people, the Jews will ruin it. View Entire Story Here, Here, Here & Here.

THE DANGER of this Jew-inspired “guideline” coming out of the Jew-controlled and run US Treasury, is three-fold:

• The users of Bitcoin and other Internet currencies will no longer enjoy the privacy connected with these mediums of exchange. Big Brother Jew will be watching every transaction made.

• The Jews will have finally gotten their freedom-hating fingers into the Internet through the back door of monitoring and regulating electronic transactions.

• The Jewish encroachment of gradualism will unfold from the drapery of monetary regulation into ‘hate purchase’ regulation (books and materials the Jews fear) and then on to “hate speech” monitoring which will give the Jews TOTAL control of the Internet and the end of exposing their lies and crimes.

If we don’t ACT NOW, our last bastion of free speech will be decimated by the Jews.