ObamaCare…Chief Justice Roberts Is A Traitor 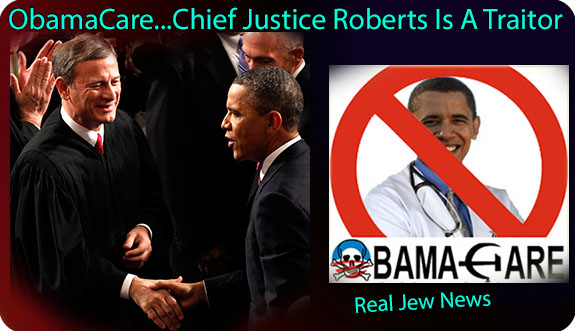 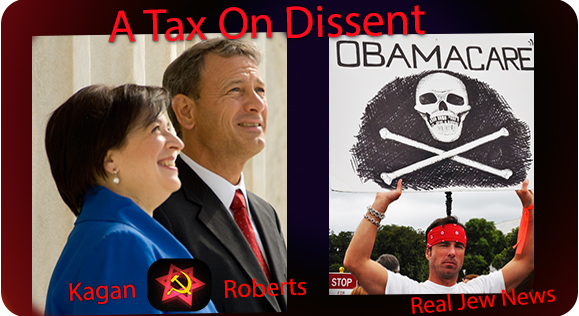 A TAX ON ‘DISSENT’ is now the law of the land in the United States of Amerika due to Chief Justice John Roberts voting to uphold ObamaCare.


Never before in the history of Amerika has a tax been levied on a decision made by an American citizen. And “bizarre” is not quite the word to define this unprecedented tax.

More accurately, what Roberts has bequeathed to the youth of Amerika is the quashing of all legitimate DISSENT by IMPOSING A TAX on any American citizen who protests against what the Jewish-run Congress demands he or she should do.

In a 5-4 vote ushering in the totalitarian-inspired ObamaCare, Roberts sided with the 4 Jews who sit on Amerika’s highest bench: Elena Kagan, Ruth Bader Ginsburg, Stephen Breyer, and Sonia Sotomayor.

Rather than recuse herself due to her involvement in promoting ObamaCare during her tenure as Solicitor General, Kagan and her co-religionists voted to solidify the centralization of Jewish power by yet another Federal encroachment on the American citizen’s autonomy.

And John Roberts, in his egoism to show off just how very “clever” he is by morphing a penalty into a tax, sided with Jewry’s ultimate agenda: The enslavement of the Goyim through Federal centralization usurping States’ rights.

And what is even weirder, Roberts wrote BOTH opinions on ObamaCare…a very strange treason indeed. 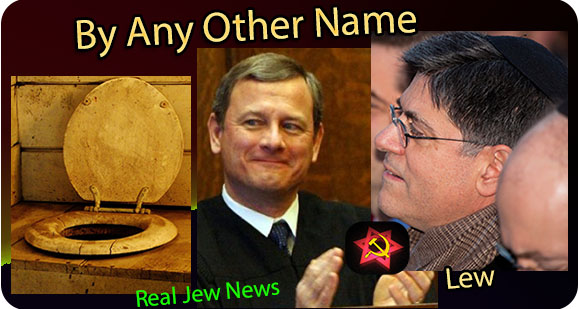 WHETHER A “PENALTY” or a “tax,” a cesspool by any other name smells the same.

Jacob Lew, Obama’s Chief of Staff, a Talmudic Jew, (a Jew who subscribes to the blasphemous Talmud), defended ObamaCare against Roberts’ “tax” by insisting that the fine for refusing the individual mandate was a “penalty” and not a “tax,” as if a “penalty” is something praiseworthy. So much for Talmudic reasoning.

Yet, Roberts’ tax exceeds the foul odour of the most polluted, dung-ridden, ‘penalty-infested’ cesspool.

A “penalty” in the form of a “fine” when a citizen refuses to buy what Congress says he or she should buy, odious as it is, imposes no more than a Congressional demand upon the American citizen.

BUT, a TAX levied on a refusal to purchase what a Jewish-run Congress demands a citizen must purchase is nothing less than a TAX ON DISSENT.

DISSENT IS THE VERY CORE of American life, manifested by American history and guaranteed by the Bill of Rights which provides for the freedom of the American citizen to pursue his own quest for life, liberty, and the pursuit of his OWN happiness.

By Roberts taxing refusals to purchase the individual mandate, dissent has been criminalized with the threat of an IRS agent throwing WE THE DISSENTERS into jail.

And by the way, the IRS, is run by the Jew, Douglas Shulman, chief criminalizer and executioner of those who exercise their right of dissent in refusing to purchase ObamaCare.

Shulman’s co-religionist, Debbie Wasserman Schultz, the Democratic National Committee Chairwoman, warned last week that those who dissent against purchasing ObamaCare will “rightfully” unleash all the powers of the IRS against themselves. (So much for Jewish hubris NOW IN OUR FACES.)

Indeed, the Jews have got Amerika by the you-know-what and make demands and threats with their Jewish heads uncovered.

And Chief Justice Roberts has become Jewry’s hero…a badge of dishonor that any true Christian man would shrink from. 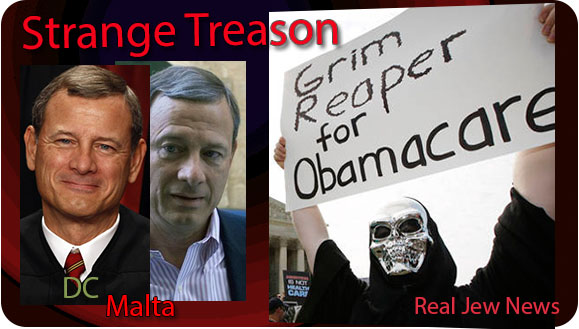 ROBERTS IS A TRAITOR

CHIEF JUSTICE ROBERTS IS A TRAITOR pure and simple.

Roberts may flatter himself with his cutesy smile and lofty thoughts of how very clever he is but history will write him down as a betrayer of the vision laid down by the Founding Fathers of America.

For our Founding Fathers limited the power of Congress to tax the individual as they sought to harness the Federal government’s penchant to intrude upon States’ rights.

By tilting the Jewish vote in favor of ObamaCare, Roberts has spit in the face of all that Washington, Jefferson, and Madison envisioned for a liberty-affirming nation (including the power of the people to overthrow a tyrannical government) and has brought Jewish rule over Amerikan life to its apogee.

A turncoat more treasonous than a Benedict Arnold has now befouled the pages of Amerikan history in the likes of Chief Justice John Roberts.

May Roberts make a public repentance before the pages of history write him down as a traitor.