A DRIVE TO CREATE a system of corporate cartels intended to replace nation-states as the political organization of the planet was launched in Post WW II Europe.

An alliance of six European banks was emboldened in its mission to replace national policies with the dictates of finance capital owing to a global atmosphere of financial instability in war-devastated Europe.

According to Lyndon LaRouche, each of the members in the alliance represented a bank in one of the principal nations of the European Economic Community: -1- Kredietbank of Belgium; -2- Nederlandsche Middenstandsbank; -3- Credit Commercial de France; -4- Nuovo Banco Ambrosiano of Italy; -5- BHF Bank of Germany;-6- Privatbanken of Denmark.

The operation was run by Jacob Rothschild of N.M. Rothschild in London. In a speech in 1983, Rothschild outlined the mission of the project: “Two types of institutions, the worldwide financial service company and the international commercial bank with global trading competence, may converge to form a many-headed financial conglomerate.” For Rothschild, it was not a prediction, but a statement of intent. View Entire Story Here. 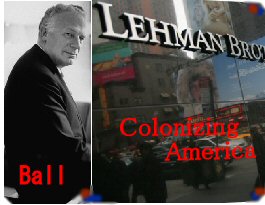 The new cartel scheme, dubbed as, “The Multinational Enterprise,” was championed by George W. Ball, undersecretary of state under Kennedy and Johnson, and later, senior banker (Gentile window dressing) at Lehman Brothers from 1968-1982.

Ball predicted a conflict between the Multinational Corporations and Nation-States, saying: “The Multinational Enterprise is a modern concept evolved to meet the requirements of the modern age. The Nation-State, a very old-fashioned idea, is poorly adapted to serve the needs of our present complex world.”

Nation-states, in the worldview of George Ball and the Jewish financiers he represented, were to share their sovereignty with the banking houses.

Hence, beginning in the late 1960s, nations were no longer sovereign, but colonies of the international banking cartel, a multinational enterprise, funded, (and therefore run), by Jews. It was the Wall Street bankers that pushed through the GATT Agreement eventuating in the World Trade Organization that eliminated tariffs on imports resulting in the destruction of American manufacturing.

Tariff-free trade is demonstrated today by the marriage between finance capital and multinational corporations.

For example, US investment banks such as Citigroup and Morgan Stanley — (Robert Rubin/Co-religionists runs Citigroup & Jim Rosenthal runs Morgan Stanley) — are in the oil tanker business for storing crude oil.

THE STRUGGLE BETWEEN NATION-STATES and internationalism is best understood in the conflict waged by Adolph Hitler prior to WW II against finance capital.

When the National Socialists came to power in 1933, the German economy was in total collapse. Through an independent monetary policy of sovereign credit, not beholden to international Jewish financiers, Hitler was able to turn a bankrupt Germany into the strongest economy in Europe.

By issuing interest-free money, the German government, under Hitler and Economics Minister, Hjalmar Schacht, financed its entire operations from 1935 to 1945 without gold and without debt.

With full sovereignty intact, policies of economic nationalism and full employment thrived, thanks to the German industrialists, (not given to an internationalist spirit), who supported Hitler’s “Germany First” agenda.

IT TOOK THE ENTIRE capitalist and communist world to destroy the German revolution against internationalism and bring the entire European continent back under the heel of Jewish Bankers.

Today, the institution of “democracy,” in the grip of Jewish money and media power, jettisons both a nationalist agenda and the wise leaders needed to put an “America First” plan into action.

Full employment, coupled with a renewal of Christian morals and optimism, is the necessary path to national health and creative energy. Can America, a nation enslaved to Zionist aims and ambitions, find a way out of its economic and spiritual malaise?

With proponents of Jewish internationalism, such as Barack Obama, who appealed to the United Nations to counter Arizona’s Immigration Law, the prospects look dim.

Perhaps a charismatic leader, (for the sake of the Jews, not a new Hitler), will arise and restore America’s sovereignty and honor…