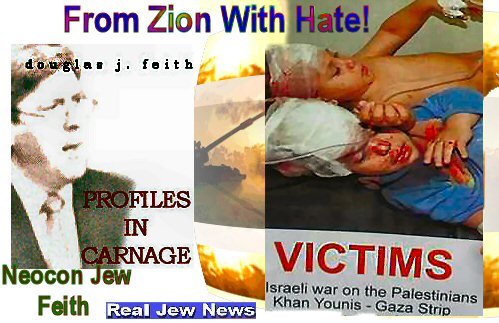 Neocon Jews such as Douglas Feith are “Jews-First” and “Americans-Second.” In other words, neocon Jews will sell out America at the drop of a yarmulke just to keep their beloved “IsraHell” afloat.

American politicians like George W Bush turn a blind eye to all of the atrocities that the Israelis have committed against innocent Arab civilians — whether it be committed in Gaza Strip of recent days or in Lebanon of last year. And why is this so? Because the Jews have bought their way into Washington with their Jewish money that has innocent Arab blood splattered all over it.

Here is a news story about this week’s assault on Gaza by Israelis that should catch a tearful Christian eye:

— “GAZA STRIP January 16 08: The Palestinian Institute For Human Rghts demanded an international investigation of the Israel Occupation Force (IOF) use of internationally-banned weapons against Palestinians in the Gaza Strip.

The Institute said that IOF troops committed an “ugly crime” in Gaza in which more than 60 casualties were counted. Medical reports indicated that the bodies of those killed in the massacre were maimed and mutilated which supports the idea that Israel had used internationally-banned weapons.” —
See Article: Here

Here are 2 medical reports verifying that banned weapons were used against Arab civilians as well as a medical blockade:

Palestinian sources also said that many victims were dying in local hospitals due to an Israeli blockade on medicine and medical supplies.” —
See Articles: Here
And: Here 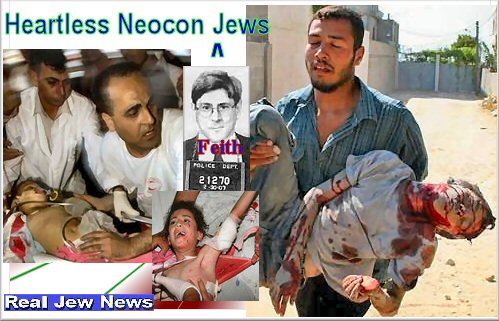 Feith’s multi-billion dollar client has as one of its divisions Israel Aircraft Industries which unloads its aircrafts with weapons of destruction on innocent Arab babies and children.

A vocal advocate of US intervention in the Middle East and the hard-line policies of the Likud Party in Israel, Douglas Feith is known for his book published in 1999 entitled, The Dangers of a Palestinian State. In the book Feith writes:

— “Israel is unlikely to retain control over captured territories unless its people actually live there. Supporters of settlements reason: If Israelis do not settle an area in the territories, Israel will eventually be forced to relinquish it.” —

In other words, Feith is saying: ‘Who cares about the Arabs and their right to the land! We want it and we and the USA will do whatever it takes to keep it! 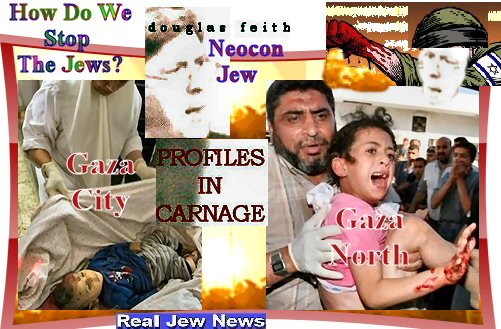 HOW CAN AMERICANS STOP THE JEWISH GENOCIDE
OF INNOCENT ARABS?

AMERICANS MUST WAKE UP and understand that the bloodshed of innocent Arabs is caused by Zionist traitors of American interests - both morally and financially. And the neocon Jews like Douglas Feith are the Zionist traitors who should all be exiled to their beloved “Israel.”

Americans must be very vocal against these neocons and not be afraid to call these Zionist traitors, “Jews.” Yes the labels of “Anti Semite,” “racist,” and “right-wing reactionary” will come to those who speak out. But sometimes what we know to be true must eventually come out in spite of Jewish censure. For Jesus Christ Himself warned: “There is nothing covered that shall not be revealed.”

And indeed, the Jewish cover-up of their crimes against humanity is now coming to an end. I predict a backlash coming soon against the Jews. They better repent of their sins against mankind and accept Jesus Christ as their Messiah. For the judgment of God is about to fall on their wicked heads!