Br Nathanael: What is Martial Law as defined?

Joe Cortina: It is the anti-American act of the Government’s power to authorize the armed forces to take total control over the lives of American citizens.

Martial Law can be used for a certain area only or for the entire nation. The time period is indefinite and all civil liberties are usually suspended. With our current laws, the President has the power to enact this treason on our people.

Br Nathanael: Is the use of Martial Law in our nation a valid course of action?

Joe Cortina: Martial Law has NO Business in ANY modern free world nation - especially the US. Its ultimate objective is the control and enslavement of the people it is forced upon.

Our current, illegitimate, Marxist, homosexual, Israeli-loyal coward in chief Obama, may, by his authority and WITHOUT APPROVAL OF CONGRESS, incarcerate as many millions of citizens as he deems fit and use our military to do so.

Br Nathanael: Isn’t this unrealistic? Would our own military forcibly act upon its own people and neighbors?

Joe Cortina: It’s not unrealistic at all. Over the years there has been copious evidence that a substantial percentage of ‘Americans’ in uniform will not hesitate to shoot down their own people.

One example is the 29 Palms Naval Survey where it was shown that Americans in fact WOULD fire on citizens if only ‘ordered to.’

Remember – there are now foreign troops here in America training for this very purpose. The theory is that these foreign troops posing as ‘Americans’ would be more likely to murder our own neighbors. View Foreign Troops In US Here & Here.

Br Nathanael: What other proof do you have that military force could be used against us?

Joe Cortina: Look at the murderous conduct of our military in Afghanistan and Iraq – two sovereign nations that have not attacked or done any harm to Americans in any way – yet our war-criminal commanders have easily convinced our youth to murder more than TWO MILLION totally innocent defenseless civilians – mostly children – SOLELY for the pleasure of the Jews.

My own son is currently in this Army of killers and has proudly sent me postcards from ‘basic’ showing how he is being taught to “kick in doors” and, if necessary, “kill civilians inside.”

Br Nathanael: But isn’t the army, at least at this point, absent from civil order enforcement on a day by day basis?

Joe Cortina: We don’t really have to look at the army. Look at what Homeland Security is already doing on our streets.

In Arizona, recently, a young White Christian pastor was apprehended by the Homeland Security Police on patrol against illegal aliens.

When defending his rights regarding no probable cause for the officers to ask for his ID, and even when they admitted that they knew who he was, the police flew into a rage.

As punishment for their authority being challenged, the DHS cops tasered and brutally beat the Pastor. He was rushed to the hospital and ended up with eleven stitches.

If this kind of thing can happen without Martial Law, we know what we are in for once Martial Law IS declared. View Entire Story Here

OBAMA PREPS FOR MARTIAL LAW
Br Nathanael: What pretext would Obama use to declare Martial Law?


Joe Cortina: The possibilities are endless. Your readers must keep this vitally critical fact in mind as we delve further into likely-cause scenarios.

FACT! - Our President and Congress are Jew-loyal and will do whatever is best for IsraHELL, not what is best for America. Of course you know that the Zionist Jew, Carl Levin, serves as Chairman of the Senate Armed Services Committee. His loyalties are certainly to his own tribe and would not hesitate to look favorably on Martial Law being declared by Obama so as to corral the ‘Gentile cattle.’

Joe Lieberman, a Talmudic Jew, also serves with his co-religionist, Levin, on the Armed Services Committee. He also chairs the Senate Homeland Security Committee. Both Levin and Lieberman, along with their real constituency, that is, Jewish Americans, would indeed relish the opportunity to put us all under military constraint.

As for our current commander-in-chief, every President since Wilson has kissed the Jews’ asses to the point where we are the laughing stock of the world. Obama is certainly no exception.

Br Nathanael: Agreed. But were seeds planted before Obama came into office by the Republicans?

Joe Cortina: Absolutely. In reality, Obama is nothing more than a third term George Bush.

Remember, when confronted with the constitutional ramifications of the Patriot Act, Bush blurted out his true sentiments: “Stop throwing the Constitution in my face. It’s just a goddamned piece of paper!”

In other words, the unconstitutional Patriot Act was the first step towards Martial Law. Your readers need to know that we are still in denial. Republicans are NOT going to save America. They are also controlled by the Jews.

Br Nathanael: Can you give us some likely scenarios that would prompt Obama declaring Martial Law?

Joe Cortina: Certainly. A ‘food crisis’ for one.

A shortage ‘created’ — not totally unlike what the Soviets did to starve millions of Christians to death in the Ukraine — is a likely scenario. 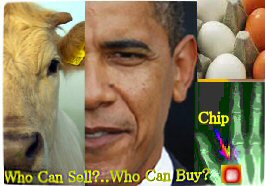 Last week a ‘crisis’ was fabricated regarding “550 million salmonella-contaminated eggs” being recalled. It made big news in the Jewish-owned press. BUT - in reality, which their press did NOT report - the eggs were linked to only a few farms with a much lower egg count.

The truth of the matter is that our government is using “eggs” to create an ever-widening encroachment of our lives vis-a-vis our stomachs. It’s all a setup to create a crisis environment since even chickens are ‘contaminated’ with salmonella.

Once you cook either chickens or eggs, all traces of salmonella are destroyed. It’s all just another Jewish-inspired pretext to gain more power over our lives.

Br Nathanael: Okay. It’s a ploy for control. But why would Martial Law ever be needed in a food crisis?

Joe Cortina: First of all, there is a new law up for approval that would criminalize citizens who attempt to grow their own food.

Imagine your neighbor being taken away by the Obamanites, his crops destroyed and then imprisoned. Uprisings of angry citizens subjected to the same circumstances — with ‘violence’ created by government ‘plants” — and you have a regional Martial Law scenario.

Also, look at the oil spill. There was serious talk of a mandatory evacuation of the west coast of Florida where I live. Naturally there would be armed National Guard soldiers just to ‘help us’ evacuate our homes. They would have to evict me by force and I would not be alone. Instant Martial Law – still regional of course.

Joe Cortina: As I see it – the coming war against yet another innocent nation who has never attacked us – NOR could they attack us, Israel’s arch rival, Iran, could set off enactment of Martial Law.

While Israel gets more powerful economically, (they have bled us dry), we ourselves are at just the BEGINNING of an economic death spiral that will ultimately take us to the trash heap of history.

Br Nathanael: Will there be civil unrest?

Joe Cortina: When Joe Six Pak can no longer afford his tailgate parties and his 50 yard line season tickets and Stupid Bowl extravaganzas - he just might become angry enough to do what he should have had the brains and the balls to do years ago - take back the country he sold to the Jews.

By that time there will be tens of millions of Americans out of work and desperate. There will be mobs in the streets protesting things they still don’t have a clue about. THAT will foment Obama to simply say: “Martial Law is hereby implemented across the nation.”

The next morning you wake up to a real life nightmare in AmeriKa. Your neighborhood streets will be filled with armed troops of many nationalities – there will be roadblocks and checkpoints all across your town and city.

OBAMA’S ORWELLIAN NIGHTMARE COMING
Br Nathanael: This is a horrible prospect – almost too terrifying to imagine.


Joe Cortina: Oh, but I haven’t even gotten started with what WILL without a doubt happen.

Free Press – GONE! Alternative Web news? What little we have left will be censored by Government-enforced “web filters” that will catch anyone trying to get the truth out. The already Jewish-controlled disinformation media – CNN, CNBC, FOX, Etcetera, will continue with its Zionist propaganda.

State Rights – GONE! Obama will become a DICTATOR under the rationality that during a ‘crisis’ the President should not have his hands tied by checks and balances so as to “impede” his ability to restore order.

Civil Liberties – GONE! Say goodbye to Habeas Corpus, Miranda rights, Legal assistance, or to even know what you have been charged with.

Arrested ‘detainees’ are often simply never heard from or seen again — EXACTLY the SAME as what we did to hundred of thousands of innocent civilians in Iraq — demeaned as things called ‘DETAINEES.’ Permanent incarceration of US citizens at the behest and whim of Obama will become commonplace. If you protest, you will be labeled as “one of them.” 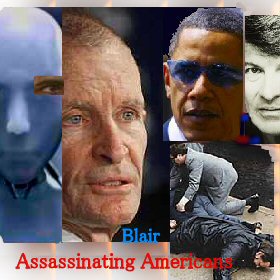 I am not exaggerating. Check our laws such as, “Enforcement To Restore Public Order Act,” and the new executive edict, confirmed by White House Intelligence chief, Dennis Blair, which grants Obama the power to assassinate Americans abroad whom he considers a “threat.”

Obama will answer to NO ONE – except of course his Jew-masters who will RELISH the notion of imprisoning millions of defenseless Christian patriots.

Br Nathanael: Are there any other probable scenarios under Martial Law you haven’t mentioned?

Economic Security – GONE! In what will be known as economic feudalism, the workplace in America will be a setting for ”national security.’ The poor, that is, illegal aliens and blacks who refuse to work, will become the working man’s burden and everyone’s job will be the ‘concern’ of the State.

A whole host of new laws, including legislation against ‘hate speech’ deemed as ‘inciting a work place disturbance,’ will be thrust upon us by the Jewish feudal lords who run Capitol Hill.

Food & Water Security – GONE! The control of food and water (Jews are EXPERTS at this type of torture in Palestine) will be in the hands of the State AND the Jews.

Buying out farms, hoarding grain, heavy taxation of livestock and crops, (“tagging” is now pending legislation to impede interstate commerce), micro-management of planting – even for private use - are all earmarks of Martial Law.

Br Nathanael: What can be done to prevent this horror?

Get every American man, woman, and youth to read this interview. Write to your Congressman, your newspaper – speak to your non-Zionist Church leaders (if there are any true believers left) and demand that all of the martial legal provisions be stricken from our laws as pure unadulterated treason.

IF this nation indeed HAD leadership by people of good moral character – there would be NO reason to fear its OWN people as ‘enemies of the State.’

Hence, there is NO REASON for enactment of Martial Law - unless – of course – the STATE has become our true ENEMY…