The Jews Who Wrote The Protocols Of Zion

THE JEWS WHO WROTE
THE PROTOCOLS OF ZION

EMERGING FROM DEEP SECRECY, portions of the Protocols Of The Learned Elders Of Zion were brought to light in the late 19th Century in France.

It is a fascinating story, presented here in a unique, unprecedented and thoroughly documented fashion. Months of intense research has gone into this work.

In 1884, a Mademoiselle Justine Glinka, the daughter of a Russian general, was engaged in Paris in gathering political information for the court of Tzar Alexander III.

Glinka employed a Jewish agent named Joseph Schoerst, alias Shapiro, who had passed himself off as a Freemason and a member of the Mizraim Lodge, a Jewish Masonic order with its own particular rites and protocols. None other than Solomon Rothschild, scion of the Jewish banking dynasty, was a prominent member of the French Freemasons.

Schoerst offered to Glinka for the sum of 2,500 francs, a document which he said would interest her greatly. This document contained extraordinary dictated writings from assorted speeches which would later be included in the final compilation of the Protocols of Zion.

Glinka quickly passed the document to her immediate superior in Paris, General Orgeyevski, who sent them, in turn, to General Cherevin, Minister of the Interior, for transmission directly to the Imperial Court in St Petersburg.

Upon Cherevin’s death in 1896, he willed a copy of his memoirs containing the Protocols to Tzar Nicholas II. (View Sources Here, Here & Here.)

Glinka’s information eventually found its way into the hands of one Sergei Nilus, a highly educated Russian mystic attached to Tsar Nicholas II’s court who served as Minister of Foreign Religions.

In 1902, Nilus published, “The Rule of Satan on Earth - Notes of an Orthodox Believer,” in which he cites excerpts from this early aggregation of the material first purchased by Madame Glinka.

Next stop for the Protocols occurred in 1903 when a prominent publisher by the name of Pavel Krusheva quoted writings from the Protocols in his daily newspaper, Znamya. After its publication, Krusheva suffered an attempt on his life and from that moment on, he lived in constant fear and had to carry weapons for his own protection. He also took the step of being accompanied by a personal cook to prevent being poisoned.

In 1905, Sergei Nilus published a new edition of his “Rule of Satan” which included a complete version of the Protocols as the final chapter. This was the first time a full compilation of the Protocols had been made available to the general public in book form.

In 1917, (the same year of the final Russian Revolution), Nilus had prepared a final edition – fully documented - but before he could distribute it, Kerensky, a half-Jew, who had succeeded to power after the Revolution, had most of the copies destroyed. Anyone caught by the Bolsheviks in possession of The Protocols was shot on the spot.

In 1918, the Protocols appeared again in a Moscow periodical, The Sentinel, marked by the Jewish-led Bolsheviks as a counter-revolutionary newspaper. In February, 1919, the Bolsheviks ordered the newspaper shut down.

In 1924, Professor Nilus was arrested by the Jewish-dominated “Cheka,” imprisoned, and then tortured. He was told by the president of the court (who was Jewish) that this treatment was meted out to him for “having done them (the Zionist Bolshevik Jews) incalculable harm in publishing the Protocols.” (View Sources Here, Here, Here, Here, Here & Here.)

THE PROTOCOLS
OF GINSBERG & PINSKER

THE DOMINATING FIGURE of the growing Zionist movement of the late 1800s, was a Jew by the name of Asher Ginsberg, who adopted the pseudonym, “Achad Ha’am,” meaning “one of the people.”

The son of a Jewish tax collector, Ginsberg was born in Kiev and later settled in Odessa, the Jewish center of activist agitation. Here he established in 1889 his Zionist group, “Sons Of Moses.”

Steeped in the works of Nietzsche, it was to the Sons of Moses that Ginsberg delivered his “protocols” for the annihilation of Christian culture and the ascendancy of Jewish nationalism based on Nietzsche’s own nationalistic vision for Germany.

The meetings of this secret society were held in Ginsberg’s house. Among the first members were: Ben Avigdor, Zalman Epstein, Louis Epstein, and Jacob Eisenstaat.

In early 1889, Ginsberg had broken with the more conservative forces of Zionism and moved into a radical position with his pamphlet, “This Is Not The Way.”

The intent of Ginsberg’s pamphlet was to oppose the “politically expedient” views of his former mentor, Leon Pinsker, a leader of the Lovers of Zion movement. Ginsberg wanted to first form a “national consciousness” in diaspora Jewry and the revival of conversational Hebrew prior to using political influence, as Pinsker promoted, for the establishing of a Jewish state.

Differences notwithstanding as regards timing, Pinsker did not differ from Ginsberg in the use of power to achieve their shared Zionist goals. In his book, “Auto-Emancipation,” Pinsker described the master-method to bring about this “self-emancipation” and to “restore the Jewish nation:”

Leon Pinsker: “The struggle to achieve our ends must be entered upon in such a spirit as to exert an irresistible pressure upon international politics.” (View Entire Story Here, Here, Here & Here.)

A striking similarity to Pinsker’s political programme is found in Protocol No. 1:

From The Protocols: “Only force and cunning conquers in political affairs. Therefore we must not stop at bribery, deceit, and treachery for the attainment of our end. In politics one must know how to seize the rule of others if by it we secure submission and sovereignty.” (View Entire Story Here.)

Following in the footsteps of his mentor, Ginsberg’s forceful rhetoric, yet with a novel and direct appeal to fanaticism, also resembled the style of The Protocols when he insisted:

Ginsberg’s call for an aggressive Jewish nationalism is clearly mirrored in Protocol No. 5:

From The Protocols: “We shall so wear down the Goyim that they will be compelled to offer us an international authority which by its position will enable us to absorb all the governmental forces of the world and thus form a super-government.” (View Entire Story Here.)

It is through persons who lived in Odessa at that time that information was obtained that a manuscript of the “Protocols” in Hebrew was circulated among the Jews.

Later, a Jew by the name of Herman Bernstein, publisher of the “Free Press” of Detroit, while claiming the Protocols to be a forgery, admitted in the presence of William Cameron secretary to Henry Ford, that he had personally read the Protocols in their published Hebrew form in Odessa.

During the Jewish-led Bolshevik Revolution, few towns were so torn as Odessa, where Ginsberg taught the destruction of Christian society, a basic tenet of The Protocols.

Among other outrages such as the raping of Christian women and girls, a Christian orphanage was destroyed and all the children shot to death. Racism and a deadly mockery of non-Jewish life was already an established practice of world Zionism. (View Sources Here, Here, Here & Here.)

CLASSIFIED US INTELLIGENCE DOCUMENTS investigating international financial issues surrounding WW I were compiled in August 1919. These sensitive documents were given SECRET classification until 1973.

A hard copy of this document may be obtained from US National Archives in Washington DC - its number is 245-1.

On page 5 of the document, the public writings of Theodore Herzl, hailed as the father of world political Zionism, are cited as having “identity of thought found in the Protocols.”

This long-suppressed, finally declassified document, displays striking similarities between Herzl’s essay published in 1897 titled “The Jewish State” and Protocols 1 and 20: 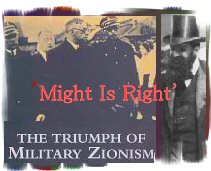 Theodore Herzl: “Every point which arises in the relations between nations is a question of might. I do not here surrender any portion of our prescriptive right when I make this statement.

In the world as it now is and will probably remain, might precedes right. For us to be loyal patriots as were the Huguenots who were forced to emigrate is therefore useless. The Jews must acquire economic power sufficiently great to overcome prejudice against them.

When we sink, we become a revolutionary proletariat, but when we rise, there rises also our terrible power of the purse.” (View Entire Story Here, Here & Here.)

From The Protocols: “According to the law of being, might is right. Our right lies in force. Through our financial dominance we will manipulate capital, create depressions, and bankrupt Gentile states.

In our hands is the greatest power of our day — gold. We shall not fail with such wealth to prove that all the evil we have had to commit has served to bringing everything into order.

We shall contrive to prove that we are benefactors who have restored to the mangled earth the true good of the person, on the condition, of course, of strict observance of the laws established by us.” (View Entire Story Here & Here.)

CLOSELY ASSOCIATED WITH THEODORE HERZL, was Max Nordau, who convinced the Zionist leader to organize the First Zionist Congress of 1897.

Nordau was born Simcha Sudfeld in 1849 in Budapest and later changed his name to create a “Gentile” public face. It was at the First Zionist Congress, held in Basel, Switzerland, that Nordau was elected to serve as Vice President to the Presidency of Herzl.

At the Sixth Zionist Congress in 1903, Nordau announced the Zionist plan as a fait accompli for the next two decades:

Max Nordau: “The rungs of our ladder lead upward and upward: The First Zionist Congress - The English Proposition For A Jewish Homeland - The Future World War - The Peace Conference By Which A Jewish Palestine Will Be Created “ (View Entire Story Here.)

Herein are displayed the “rungs” of both the Zionist and Protocols ladder … a preconceived plan to be put into motion by controlling the levers of international politics.

History does not lie. Nor do the words of the Jews who foretold what they would be forging in the century ahead.

And: Prelude To The Protocols - Napoleon & The Jewish Sanhedrin Click Here