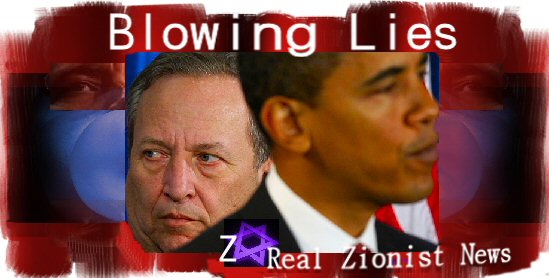 “EVERY ECONOMIST WHO HAS LOOKED AT MY STIMULUS ACT has said that the Recovery did its job,” Obama announced at a Town Hall Meeting in Wisconsin recently.

What Obama did not tell the hand-picked audience is that many leading economists assert that the impact of Obama’s Stimulus Bill has been insignificant at best.

Michael Boskin, for instance, a senior fellow at the Hoover Institution, says that Obama’s vast enlargement of the Federal government and anticipated tax hikes to pay for ObamaCare and his recently passed Financial Reform Bill are offsetting any short-run expansionary effect of his $787 billion Recovery Act.

And in a recent survey by the National Association for Business Economics, 68 of its members who work in economic roles at private-sector firms, said employment at their companies was no higher a result of Obama’s Stimulus Bill.

What else did Obama blow lies about? He failed to mention at the Town Hall Meeting that most economists agree that the high future taxes to finance his programs will result in $3.40 of lost output for every dollar of government spending.

SUMMERS BLOWS HIS OWN LIES

“WE ARE BUILDING ON THE RECOVERY ACT,” wrote Larry Summers, chief of Obama’s Economic Advisors, in a Financial Times article on July 18, 2010.

“Today, the Act is in its most intense phase of public investment,” Summers said. “By fighting to extend unemployment and health benefits to those out of work and to help struggling state and local governments prevent cutbacks in vital services, we can avoid job losses for teachers, police officers and firefighters,” Summers added.

But Larry, can you tell us how spending more tax-payer money is going to “build” a recovery?

Summers then tops it off with a whopping lie: “During the next five years, the US will experience the fastest deficit reduction since World War II.”

Nonsense. With the deficit now at $2 Trillion on Obama’s watch, the US debt will increase by billions of dollars each year.

And with the vanishing White Middle Class who pays for Obama’s spending sprees — with foreclosures to reach 1 million by year’s end — and with the continual offshoring of US manufacturing, both Obama and Summers would do the nation a big favor by submitting to a lie detector test.

WHERE DID ALL THE TAX-MONEY GO?

OVER ONE BILLION DOLLARS OF STIMULUS MONEY went to Jewish institutions, reported the Jewish Telegraphic Agency.

Lobbying for the passage of Obama’s Stimulus Bill to pad their own purses, the Jewish Council for Public Affairs, the National Council of Jewish Women, and the Religious Action Center of Reform Judaism, divvied up the billions of tax-payer money to a plethora of Jewish nursing homes and a variety of Jewish social services.

“Jewish interests are deeply bound up with the policy selections of what will be funded in the Stimulus Bill,” said Rabbi David Saperstein, director of the Religious Action Center of Reform Judaism.

Finally, someone isn’t lying about Obama’s Recovery Act. “Jewish interests,” as the Rabbi admits, NOT hard working Americans’ interests, are ALWAYS at the core of US legislation.

And with the US economy on the decline, perhaps the best place to look for the blame is also, “Jewish interests…”

And: The US ‘Recovery’ And Bernanke’s Jewish Lies Click Here

And: A New Vision For America - Brother Nathanael On Video! Click Here