How Lieberman Stole Our Freedoms

HOW LIEBERMAN STOLE OUR FREEDOMS
By Brother Nathanael Kapner, Copyright 2010 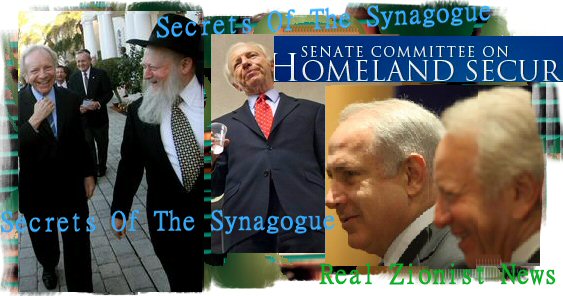 NO MAN IS MORE RESPONSIBLE for bringing America into a Police State than Senator Joseph Lieberman.

Only one month after 9/11, Lieberman, who describes himself as an “observant” Jew, seized upon an opportunity to oversee a Jewish police state whereby he could intrude upon the privacy of American citizens and share military and security secrets with Israel.

While holding the chair of the “Senate Committee on Governmental Affairs,” Lieberman introduced on October 11, 2001, Senate Bill 1534, to establish the US Department of Homeland Security.

Anticipating the bill’s certain passage, Lieberman gave himself automatic chairmanship after he changed the name of his committee to, “The Senate Committee of Homeland Security and Government Affairs.”

Since then, Lieberman has been the main force behind legislation such as: -1- The USA Patriot Act -2- Protect America Act -3- National Emergency Centers Establishment Act -4- The Enemy Belligerent Interrogation Act -5- The Terrorist Expatriation Act, and the proposed -6- Protecting Cyberspace as a National Asset Act.

A CLOSER LOOK at a few of Lieberman’s legislations reveals a Jewish tyranny at work:

The Enemy Belligerent Interrogation Act: Empowers the US president and the military to determine if an individual poses a terrorist threat so that he can be arrested, detained, and interrogated indefinitely.

Under this Bill, known as the “Patriot Act on Steroids,” suspects would lose their Miranda rights and Sixth Amendment Right to an Attorney and fair trial. View Entire Story Here & Here.

Terrorist Expatriation Act: Strips terrorism suspects of their US citizenship, thereby making them immediately eligible for military tribunals apart from the right of due process, legal arrest, and conviction.

The bill applies to all Americans who support any organization that is deemed a supporter of terrorism by an ally of the US. The bill gives the State Department, (run by Jews), the power to determine who is a terrorist and strip away his citizenship. View Entire Story Here & Here.

Protecting Cyberspace as a National Asset Act: Empowers the President to lock down the Internet during a national emergency. View Entire Story Here.


PERHAPS YOU’VE BEEN WONDERING with a particular gnawing at your guts, what dark forces have been at work in this now gloomy and depressed America?

It’s the same dark forces that persecuted the divine light which came into the world 2,000 years ago. And crucifying all that is good, free, divine and human, is still Jewry’s game…


And: The Coming Jewish Lock-Down Of The Internet Click Here

And: A New Vision For A New America Click Here