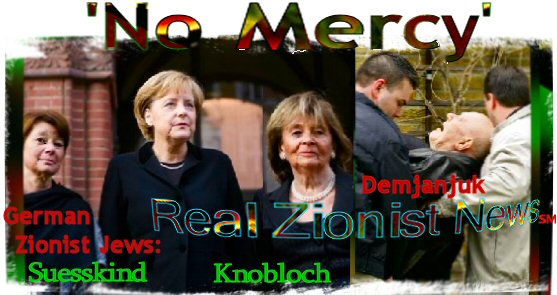 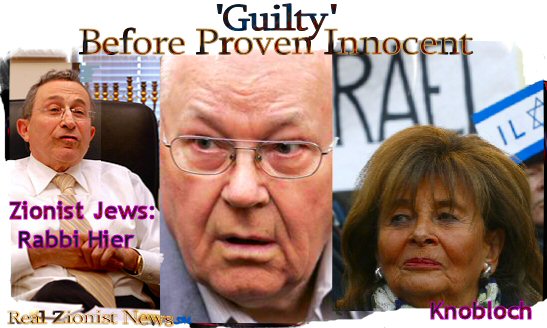 “THERE SHOULD BE NO MERCY SHOWN TO ANY living Nazi war criminals regardless of their age.”

This was declared by the German Zionist-Jew, Charlotte Knobloch, President of the Central Council Of Jews In Germany, upon the arrival of 89 year-old John Demjanjuk from the United States on May 12, 2009.

Although never found guilty before a jury of his peers, Demjanjuk faces charges filed against him by German Jews that he was an “accessory to murder” in connection with his alleged time as a guard at the Sobibor internment camp in Nazi-occupied Poland.

Demjanjuk’s sorry plight began in 1986, when he was stripped of his US citizenship and deported to Israel when accused by Zionist Jewish leaders of being “Ivan the Terrible” - a notorious prison guard at the Treblinka internment camp.

The Israeli Supreme Court overturned Demjanhuk’s conviction and death sentence for war crimes, when evidence emerged that he was not “Ivan The Terrible.” Demjanjuk was returned to the US and settled in Cleveland, Ohio, where after regaining his citizenship in 1998, he was employed as an auto worker. 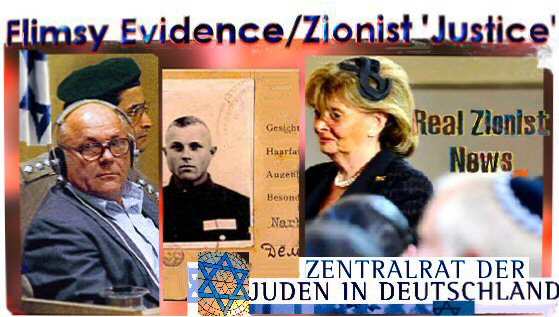 But Knobloch and the rest of German Jewry, which Knobloch represents, not satisfied with Demjanjuk’s vindication, announced, “Now after Demjanjuk’s legal wrangling to block his expulsion from America, German authorities must move forward swiftly to try him.”

Rabbi Marvin Hier, dean and founder of the Los Angeles-based Simon Wiesenthal Center, said that Demjanjuk “deserves to be punished.” In other words, in Zionist-Jewish “justice,” a man is GUILTY before charges are proven.

Even though Demjanjuk denies the charges made against him by the bloodthirsty Jews, claiming that he was a prisoner of war when captured in German-occupied Ukraine and never a camp guard, Knobloch urges “swift justice” (”Zionist-Jewish justice”) against Demjanjuk, saying, “We have waited too long to see Demjanjuk answer for the charges filed against him. 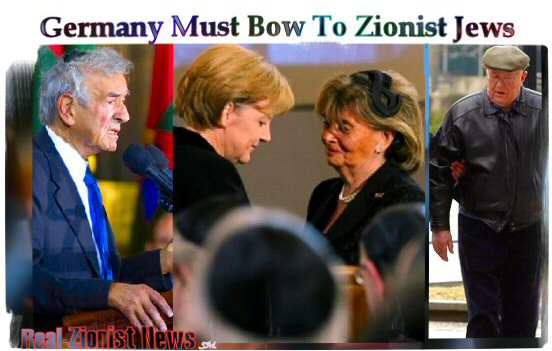 DEMJANJUK’S FAMILY HAD LONG FOUGHT his deportation from the United States, arguing that flying the wheelchair-bound man with a kidney disease and blood disorders to Germany would cause him pain amounting to torture.

Demjanjuk’s deportation marked the end of months of legal resistance which culminated in an appeal to the Jewish-controlled US Supreme Court, which refused to even hear Demjanjuk’s case.

Germany, at the behest of Zionist Jews, to whom the once-Christian nation must bow, issued a warrant for Demjanjuk’s arrest in March of 2009 on charges of “assisting” in the murder of 29,000 Jews as a guard at the Sobibor internment camp in Nazi-occupied Poland. View Entire Story Here, Here & Here. 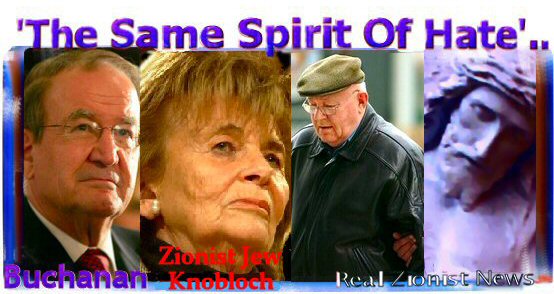 ACCOMPANIED BY A DOCTOR AND AN ORTHODOX CHRISTIAN PRIEST, John Demjanjuk arrived in Germany on May 12, 2009, after being deported from the United States to face charges that he “assisted” in the murder of 29,000 Jews. (Where do the Holocaust-Hounding Jews come up with these numbers?)

Demjanjuk landed in a specially-chartered plane at an isolated area of Munich airport where he was met by officials from the state prosecutor’s office who greeted the ailing Demjanjuk with a public declaration of the charges made against him.

The Orthodox Christian Demjanjuk was then immediately transferred to the nearby Stadelheim prison where he must await the blood thirsty Jews’ vengeance of “no mercy” to be applied to his unproven case. Demjanjuk’s relatives affirm that there is nothing to tie him to any deaths at the camp. 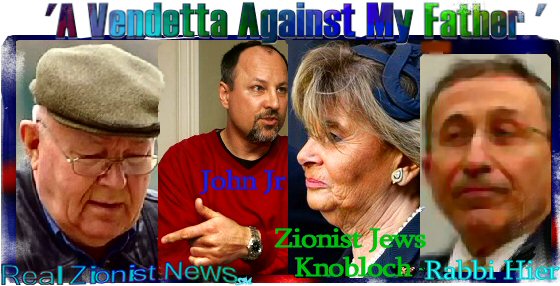 “Given the history of this case and not a shred of evidence that my father ever hurt one person let alone murdered anyone anywhere, this is inhuman even if the courts have said it is lawful,” Demjanjuk’s son, John Jr, told reporters the day prior to his father’s deportation into the hands of blood-thirsty Jews. “This is not justice,” John Jr emphasized, “this is a vendetta in the falsified name of justice.” View Entire Story Here.

In his syndicated column of April 14, 2009 - labeling Zionist Jews as the “true haters” - the world-renowned and highly respected political analyst, Pat Buchanan, called Demjanjuk an “American Dreyfus” and “the sacrificial lamb whose blood washes away the stain of Germany’s sins.” Buchanan continued in his April 14, 2009 article, “The True Haters:”

“The spirit behind the US Justice Department’s efforts to bring Demjanjuk to justice is the same satanic brew of hate and revenge that drove another innocent Man up Calvary that first Good Friday 2,000 years ago.” View Entire Story Here & Here.

American Jewish leaders reacted in their typical vicious fashion against the conservative and devout Christian, Pat Buchanan, by calling his remarks in defense of Demjanjuk, “obscene.” Labeling Buchanan as a spokesmen for the “Christian right,” US Jewish leaders intensified their censure of Buchanan for “his offensive views on Israel and Jews.” 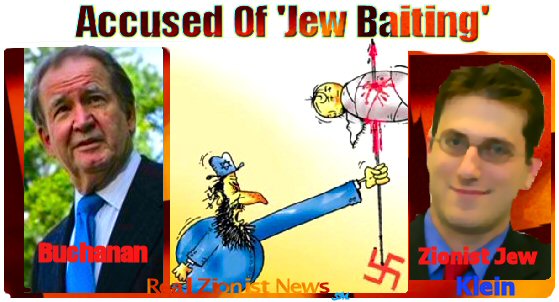 Phillip Klein, Zionist Jewish publicist of The American Spectator, began the slanders against Buchanan on April 15, 2009, calling him a “Jew baiter:”

“It’s bad enough that Pat Buchanan is rising to defend John Demjanjuk, but his column is an example of classic ‘Jew-baiting.’

Buchanan attempts to paint contemporary Jews as hypocrites by referring to Demjanjuk as an ‘American Dreyfus,’ a reference to the high-profile case of Anti-Semitism and injustice. This is the typical, ’see, Jews aren’t victims, they’re persecutors,’ tactic routinely employed by Anti-Semites.” View Entire Story Here.

On April 27, 2009, the Jewish Telegraphic Agency, censured Buchanan for not only making an “obscene” defense of Demjanjuk, but vehemently denounced Buchanan for telling an audience: “Our culture is superior because our religion is Christianity and that is the truth that makes men free.” (Jews fear Christianity as a threat to their hegemony and to their cover as “innocent victims.”)

The JTA continued their maligning of Buchanan saying: “Buchanan has referred to Capitol Hill as ‘Israeli-occupied territory’ and he considers the State of Israel to be ‘a strategic albatross draped around the neck of the United States.’” View Entire Story Here.