Jews & Their Guilt Of Deicide

Jews & Their Guilt Of Deicide 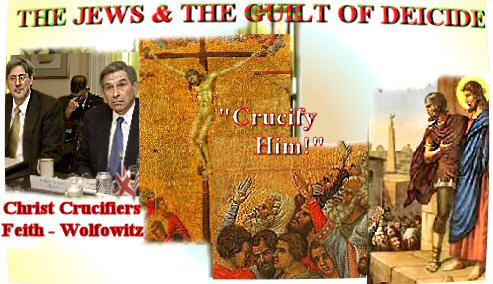 JEWS & THEIR GUILT OF DEICIDE
By Brother Nathanael Kapner, Copyright 2007-2010

And it was Jesus Christ Who said to the Jews: “You are of your father the devil. He was a murderer from the beginning and his works ye do.” (Matthew 27; John 8). Thus the Jews have no right to call the God of the Bible their “Father.”

It was also pronounced upon the Jews by Jesus Christ, “I send to you prophets and apostles and of them you shall slay and persecute from city to city: That upon you may be required of all the righteous blood shed upon the earth, from the blood of righteous Abel unto the blood of Zacharias whom you slew between the temple and the altar.” (Matthew 23; Luke 11).

As a malevolent power under the Deicidal Blood Curse, the Jews are the enemies of Christian civilization. St Paul said, “The Jews are the enemies of the Cross of Christ.” (Philipians 4). The Jews fear Christianity more than any other force in the universe. Thus the Jews will do all in their sphere of influence, (now every single sphere imaginable), to destroy Christian culture. Why do the Jews perceive Christianity to be their lethal enemy?

Because Christianity records the historical fact that the Jews crucified Jesus Christ, the Lord of Glory. Each individual Jew, as the Bible teaches, shares in the Corporate Guilt of the murder of Jesus Christ. Thus the Jews, both individually and corporately, must repent of their sins and become Christians.

But this Biblical prospect makes the Jew recoil. The Jew does not like anyone dictating terms to his proud and haughty self–much less telling him that he must repent! “Ugh!” says the proud & haughty Jew. “Me repent?” Ugh!”

St Basil the Great of the 4th Century said, “Jews inherit the blood-guiltiness of their fathers and are for that reason, for all ages, stained with the blood of Christ. When the Jews stretch forth their hands in prayer, they only remind God the Father of their sin against His Son.” (On Prayer)

THE DEICIDAL BLOOD CURSE is still upon the Jew. The Deicidal blood curse is still unrepented of and confirms the Jews in a murderous disposition with the wrath of God upon them. This can be seen in the Jews’ penchant to criticize, to continually find fault, that is, to tear down all existing orders, especially the Christian order of Western civilization. 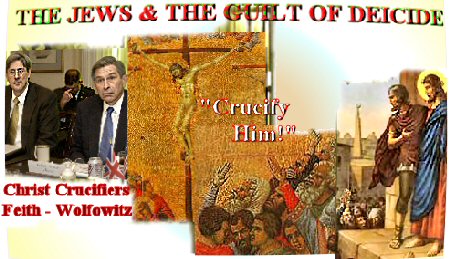 THE JEWS ARE TO BE SUBJEGATED TO THE NATIONS

THE JEWS DREW SERVITUDE upon themselves when they told Pontius Pilate, “We have no king but Caesar.” (John 19) Amongst themselves they said, “If we do not slay Christ, all will believe in Him and the Romans will come and will take away both our place and our nation.” (John 11)

But the nations believed in Christ and the Jews themselves were deprived by the Romans of their place and of their nation. Political Zionism which has arisen in the past 100 years, is nothing less than the theft of orchards and properties owned by Palestinian Arabs. Is God then a partaker of the Jews’ thievery? By believing that Israel is a fulfillment of Biblical prophecy we make God an accomplice to the Jews’ thievery.

Servitude is now the Biblical-prescribed lot of the Jews. King David said of the Jews in their unbelief in the coming Messiah, “Let their eyes be darkened and their backs bowed down continually.” (Psalm 68). The Church Fathers to a man teach that the Jews incurred upon themselves an endless servitude to the nations. (Hipploytus, Against The Jews; St John Chrysostom, Homilies Against The Judaizers)

We should then never allow a Jew to have any political power whatsoever. Neocon Jews like Paul Wolfowitz, Richard Perle, and Donald Feith, should be driven from their spheres of influence. Hopefully, Ron Paul will get elected as President, and get rid of them all.

HOW SHOULD WE DEAL WITH THE JEWS?

THE JEWS ARE NOW totally out of control. We have allowed them to destroy our Christian heritage, beginning with their War On Christmas.

According to the Jewish Talmud, the “goyim” are soul-less cattle created to serve the Jews, and whom the Jews have an historical destiny to conquer in world domination. Thus the Jews seek to strip the Christians of their religion, their cultural decency, their political sovereignty, and their economic independence.

With the Jews’ control of the media and their endless cries of “anti-Semitism,” (aren’t we all simply sick of it already?), they have falsified reality to the extent that many now think that Christians are the guilty murderers who have always persecuted the Jews. But Christian nations had to take necessary action against these scheming and evil foes.

THE ONLY ANSWER is to tell the Jews that they must repent and become Christians. We who dictate these terms to the Jews must commit to a holy Christian life and regular Church attendance. There is still a chance that we can recover all that the Jews have stolen from us.