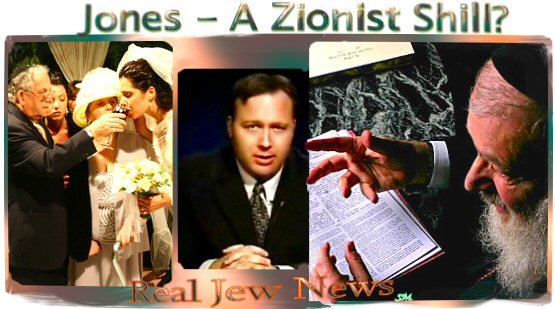 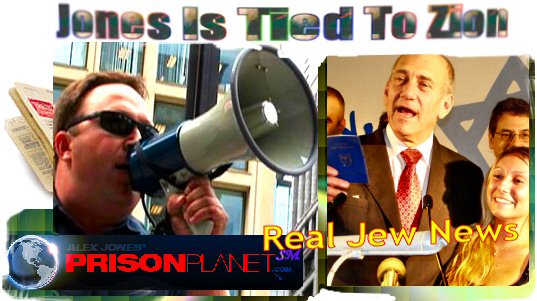 THE SIMMERING CONTROVERSY OF ALEX ‘BULLHORN’ JONES being a Zionist shill and de facto Zionist agent and spin meister has now spilled over onto Jones’ own public Prison Planet Message Board (see below)…despite alleged message-censoring efforts by Jones, personally, and his staff.

According to a number of postings which are excerpted below, Jones allegiance to Zionism stems from two things: 1) His core Protestant Fundamentalist-Zionist belief system, and, 2) Widely circulated reports that his wife is a Jew which would make their two children Jewish under Talmudic law.

Here is a sampling of postings published on February 23rd, 2009, on Jones’ Prison Planet Forum (Scroll Down) demonstrating his Zionist leanings:

** FORBIDDEN INFORMATION THAT ALEX JONES DOES NOT WANT YOU TO KNOW **

It is well-known that many years ago Alex Jones used to complain on his radio show about how difficult it was for a non-Jewish spouse of a Jewish person to immigrate to the state of Israel because of the excessive bureaucratic red tape and regulations involved.” View Entire Story Here.

HERE IS PROOF FROM THE ASTUTE COMMENTER at the Prison Planet Forum that Alex Jones tried to censor comments regarding his Zionist sympathies:

“Alex Jones does not wish for this information about his wife to become widely known and he is desperately trying to conceal it.

Jones has instructed his Webmaster, Paul Watson, to create a text filter that scans all comments posted on this website for the word ‘w-i-f-e,’ except without dashes or other characters between the letters.

If the word ‘w-i-f-e’ (without dashes) is found in either the body of the comment itself or in the poster’s name, then that comment is automatically placed on moderation.

If you don’t believe what I am saying, then please try it out for yourself. Simply post a comment with the word ‘w-i-f-e’ contained in it, except do not place dashes between the letters of the word. You will see that when you post your comment, it will automatically be placed on moderation status. You will see the following message next to the title of your post: ‘Your comment is awaiting moderation.” View Entire Story Here.

JONES EXPOSED AS A ‘DISINFO’ AGENT FOR THE JEWS

ALLOWING JONES TO TAKE A HIDDEN CAMCORDER into the Zionist elite’s/Skull & Bone’s, Bohemian Grove, in the Redwoods forest in January of 2006, the Zionist Jewish press conferred upon Jones a celebrity status. Now making a name for himself due to the Zionist Jewish press’ collaboration, Jones was able to gain the undying (frightening) maniacal devotion of thousands of Americans. View Entire Story Here & Here.

Another commenter on Jones’ Prison Planet Message board, with penetrating insight, brought to light Jones’ role as a ‘disinfo’ agent for the Jews:

“I agree that while on the air, Alex Jones is a disinfo agent for the Jews and Israel. Obama, whom Jones criticizes, is an African American whose administration is infiltrated with Jews and Israel-Firsters. The communists, to whom Alex Jones and his guests refer, who influence and surround Obama, are also Jews. The banksters and the elite groups they talk about are dominated by the Zionists. There would not be the powerful Rockefeller dynasty had not the Jewish Israel-Firsters, the Rothschilds, financed it.

Israel did 9/11 - Mossad did 9/11. The low-life Larry Silverstein should be arrested and asked to take a lie detector test because of his involvement and benefit from the destruction of the twin towers. I am very disgusted with the decision of Alex Jones to revert to his former refusal to tell the truth, the whole truth, and nothing but the truth as to the identity of the criminals who are destroying the USA.” View Entire Story Here. 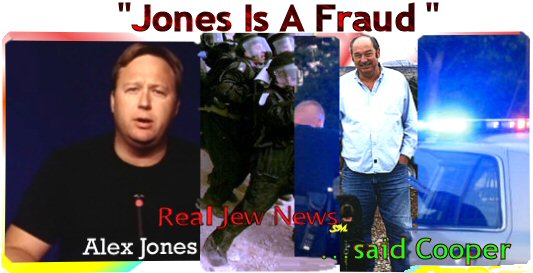 ABOUT SEVEN WEEKS AFTER EXPOSING JONES AS A LIAR AND A FRAUD on his highly-regarded national patriot radio show (Watch & Listen HERE), William Cooper (author of the alternative news best-seller - ‘Behold A Pale Horse’ - was shot to death at his home in Eager, Arizona on November 5, 2001.

Indeed, the renowned author, historian, and political theorist, Cooper exposed Jones clearly as a fraud and was, according to many, assassinated to shut him up a few weeks LATER.

It has come to light after Cooper’s expose of Jones as a liar and a fraud, that Alex Jones downplayed any role that the Israelis and their Zionist counterparts in America had in the 9-11 incident. Jones continually shifted the blame away from the Zionists and onto other people, mainly Americans, but also some British and Chinese. Then Alex Jones tried to convince his readers that the Zionists are actually subservient to other people, such as the Queen of England! View Entire Story Here.

Some suggest Cooper was clearly a major obstacle for Jones and was obviously removed to clear the way for Jones to ‘fly-paper op’ as much of the patriot community as possible. View YouTube Videos Here. Jones has accumulated a large following in the years since Cooper’s death and has developed legions of kool-aid drinkers ready to, in many cases, probably take a bullet for him if needed.

Jones, with his massive, ravenous ego and Protestant-fundamentalist background, is plainly a Zionist operative and co-conspirator. Either in the closet or otherwise, it matters not. Sadly, his legions of sycophants and kool-aid drinkers are every bit as blind and brainwashed as those who will follow Obama into the abyss and will never figure it out…