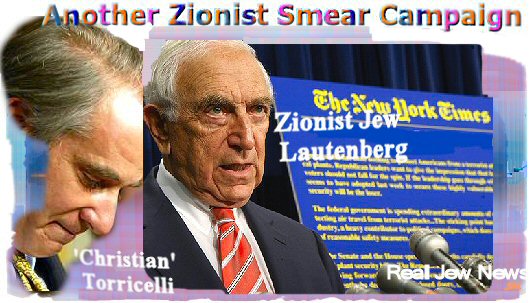 A vicious smear campaign then ensued against Torricelli by the Zionist-Jewish occupied press resulting in Torricelli’s “disgraced” removal from his Senate seat in favour of the Jew, and now incumbent, Frank Lautenberg.

This occurred in a series of “smears” against Torricelli leading up to the November elections of 2002. But let us begin our account in chronological order.

In a rebuke to President Bush with his War On Terrorism cover, Torricelli addressed the Senate again on February 5 2002, calling for an “open” Board Of Inquiry On 911:

“President Bush has suggested that we hold private hearings regarding the 9/11 tragedy. This is not how we conduct the Government.

Our accountability is to the people of our country. Yet the administration claims that such hearings would be a distraction from the war on terrorism. That is not our history or how we conduct our Government. Accountability is at the core of any representative government. This Nation needs an independent board of inquiry to determine the events of September 11.” View Entire Story Here.

On February 17 2008, Torricelli pressed for the need of an “independent” Board Of Inquiry on 9/11, sequestered from the bias of Congress & the White House:

“An investigation must be conducted by an independent board of inquiry to determine what problems need to be addressed in US agencies responsible for intelligence.

Simply leaving this inquiry to the House and Senate intelligence committees would not provide the impartial investigation needed. Those committees have had continuing oversight for the very intelligence agencies they would be investigating. Thus they would not provide the fresh perspective an independent board would bring to the issue.” View Entire Story Here.

ALARMED BY THE THREAT of Torricelli’s call for an open & independent investigation of the 9/11 events, on January 29 2002, Bush held a private meeting with congressional leaders requesting his own agenda for the investigation.

Senate Majority Leader, Thomas Daschle (D-SD), told reporters that he “agreed” with the demand by Bush to “to limit the scope of what happened.” On May 2002, the fix was fully in, when the White House affirmed its opposition to an independent & open commission, contending that, “the most of what we need to talk about should not be discussed in open hearings.”

The Democrats, beginning with Daschle, had now succumbed to pressure from the Bush administration, agreeing that there was no need to challenge the “official” version of the 911 tragedy.

‘THE ‘SMEAR’ AGAINST TORRICELLI

THE JEWISH-RUN NEW YORK TIMES, (owned by the Zionist Jew, Arthur Sulzberger), launched a series of “smears” against Senator Torricelli, beginning in the winter of 2002.

In the book, 9-11 Synthetic Terrorism, the author, Webster Tarpley, of Rense.com, wrote that Torricelli became the target of “corruption” charges regarding his campaign finances. Torricelli supporters hailed US Attorney Mary Jo White’s 2002 decision not to pursue prosecution of Torricelli for “accepting illegal gifts.”

But even on that occasion, Tarpley wrote, the New York Times kept up the pressure on Torricelli, arguing that “the allegations against Mr Torricelli cry out for a prompt investigation and resolution.”

Then, on September 21 2002, (due to Zionist-Jewish media lawsuits against Torricelli), a Federal Judge ordered a letter to be released to the press, which suggested that Torricelli was guilty of more than talking gifts. (Federal prosecutors have never brought any charges against Torricelli.)

By the beginning of October 2002, Torricelli’s position in the polls collapsed, and he dropped out of the race. The Zionist Jew, Frank Lautenberg, went on to win the seat.

Is it not obvious that Zionist Jews in the media, (as evidenced in their smear campaign against Senator Torricelli), are complicit in the “cover-up” of the truth surrounding the events of 9/11? But no surprise. For it was the Jews who crucified The Truth Himself, the Lord Jesus Christ, 2000 years ago…