The Slow Death Of Zionist America

America’s needs, whether it be food, clothing, habitation, or defense, was once bound up and provided for through its domestic manufacturing base.

As the US Recession deepens and job losses set records, (530,000 jobs were lost in November 2008), the blame must be pointed at the Jewish bankers of the privately-owned Federal Reserve Bank who gouge our money supply with unconstitutional interest rates.

These interest rates, which create continual inflation, prompt manufacturers to outsource & relocate their industries. By 2015, Forrester Research forecasts that as many as 3.3 million more US jobs will be moved to India & China. 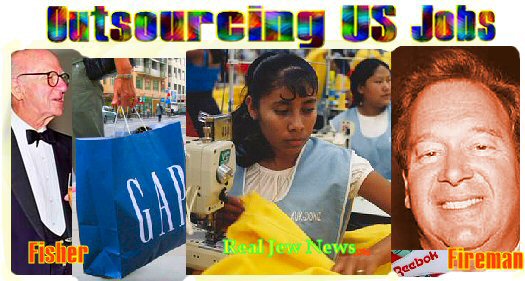 The Jewish-occupied garment industry is one of the most globalized industries existing today. In recent years, Jewish-owned American chains such as The Gap, The Limited, Old Navy, Banana Republic, Tommy Hilfiger, and Reebok, have been purchasing from sweatshops located in China, East Asia, and Bangladesh.

By the year 2000 at the turn of the century, over 60% of America’s clothing needs were exported from overseas.

Regarding industrial outsourcing, Pat Buchanan, author of Day Of Reckoning, wrote that “in 2002, 25 Steel Companies had gone bankrupt and the International Trade Commission had identified dumping as the industry killer.”

BONDAGE TO THE WORLD TRADE ORGANIZATION

AMERICAN MANUFACTURERS ARE IN BONDAGE to the World Trade Organization (WTO).

In 1994 - owing to the machinations of President Clinton’s “Kosher Kitchen Cabinet” - Clinton brought America into the WTO where the US is outvoted 15-1 by the European Union. By joining the WTO, Clinton subordinated US law to a foreign entity.

Clinton was in gross violation of the US Constitution which according to Article 1 Section 8 gives Congress the exclusive power to “to lay and collect duties and to regulate commerce with foreign nations.” (So much for our founding fathers’ intent to protect America from foreign interference.)

The World Trade Organization was established in 1994 as the successor organization to the General Agreement on Tariffs and Trade (GATT) and represents 146 countries in an effort to ‘globalize’ commerce.

Many consider the WTO to be the primary mechanism of corporate globalism effecting an economic World Take Over.

In February of 2000, the WTO held that US exporters such as Caterpillar, Ford, General Motors, and Microsoft, all of which were granted by Congress to receive tax benefits, violated WTO rules of ‘free trade’ calling the tax breaks, ‘illegal.’

In 2002, the WTO threatened to impose $4 billion in tariff penalties on US exports if Congress failed to rewrite the tax laws to conform to WTO dictates.

The US Trade Representative, Zionist Jew Robert Zoellick, pressured Congress to repeal the offending parts of the tax laws, saying, “America respects its WTO obligations and will seek to cooperate with the EU in order to resolve this dispute.”

In May of 2006, Congress cow-towed to the Zionist-Jewish agenda, and repealed the tax breaks just prior to an EU deadline.

The JudaicNew World Order is gradually deteriorating the American economy. We are now experiencing the Zionist World Take Over of our own manufacturing base.

“So Bye Bye Miss American Pie! Drove my Chevy to the levy but the levy was dry. Those good ‘ol boys…”