Russia’s ‘Wake Up Call’ To America 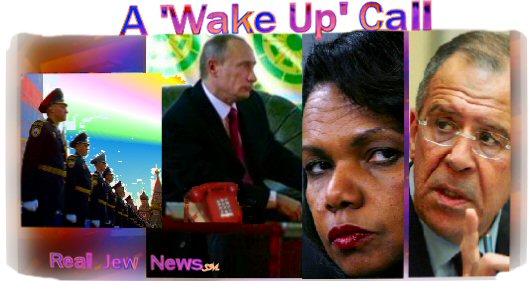 “STRAINED RELATIONS BETWEEN RUSSA & AMERICA have caused deep concerns throughout the world,” wrote Russian Foreign Minister, Sergei Lavrov, in his treatise, Face to Face with America, on October 13 2008.

Lavrov began by telling America to “wake up & smell the coffee:”

“Understanding the real world and the lack of a common vision has been the chief source of misunderstandings between Russia and America. We ought to start appropriate discussions and it must be straight talk.

That’s what Vladimir Putin asked for when he spoke in Munich in February 2007. Sadly, in America, his suggestion to hold a real discussion was left unanswered. The reaction in Europe was very different.”

“On September 11, 2001, the world changed for everyone. We hoped that unity would triumph in the face of global threats. But then Iraq came with America’s haughtiness.

Then on August 8, 2008, with regard to the Georgian crisis, the situation changed once more. The harsh reality stood revealed: not only was America’s system of global governance proven unviable, but also the European security architecture had miserably failed.”

Next, Lavrov chided America for its “distorted” media coverage of the Georgian crisis:

“Essentially it was an information war by the media in America. It was dirty, full of distortions and outright forgeries. CNN used Russia Today’s footage of Georgia’s destruction of Tskhinval to pass it off as destroyed Gori.”

“Some of our partners supported a regime in Georgia guilty of crimes against us and its own people. They did not deem it possible to take the side of truth and justice which are dear to us, because they are at the very heart of our system of values, with roots stretching back to Christianity.

When I tried to have my article published in Foreign Affairs last year, I encountered insistent censorship. All my references to Christianity as the common basis of all the branches of European civilization were cleaned up.

I believe that Christian values retain their significance, especially during times of change, when such qualities are required as humility and readiness for sacrifice. These values have a special significance for America as their policy aiming at gaining total control is doomed to failure. These things are impossible for people because these things belong to God: either under God or instead of God.” View Entire Article Here. 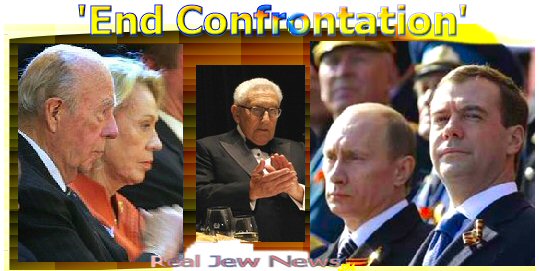 Kissinger & Schultz departed from the anti-Russian rhetoric as put out by both the Bush Administration and the Zionist Jewish occupied press:

“The drift toward confrontation between America and Russia needs to be ended. Isolating Russia is not a sustainable long-range policy. It is neither feasible nor desirable to isolate a country spanning one-eighth of the earth’s surface, adjoining Europe, Asia and the Middle East, and possessing a stockpile of nuclear weapons comparable to that of the US.

We believe that the fundamental interests of the US, Europe, and Russia are more aligned today - even in the wake of the Georgian crisis, than at any point in recent history. We
must not waste that opportunity.” View Entire Story Here.