Putin VS Jews Of The New World Order 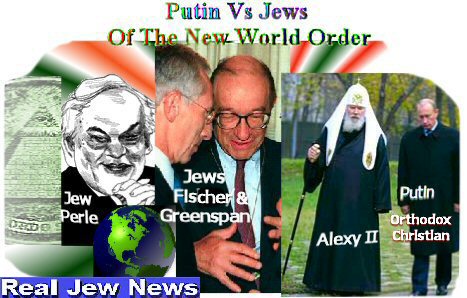 PUTIN VS JEWS OF THE NEW WORLD ORDER
By Brother Nathanael Kapner, Copyright 2007-2011

Because the Jews fear Vladimir Putin they are now publishing anti-Putin articles in their Jewish-controlled Press in order to bias public opinion against him such as in today’s Wall Street Journal article, “The Perils Of Putinism” here.

Kosovo is in the news these days as the Jews of The New World Order HERE pursue their One World Government agenda in the break up of the Orthodox Christian Serbian-Bloc in the Balkans. But the NWO Jews have a foe in President Vladimir Putin who in a recent Der Spiegel Interview Here said, “”The issue of Kosovo has immense importance to us.”

During Putin’s recent meeting with German Chancellor Angela Merkel, he stated that he would not allow an independent Kosovo separated from Serbia:

— “Russia believes it is unacceptable that a decision on the status of Kosovo be imposed from the outside. A long-term resolution can be achieved only if it is acceptable both to Belgrade and to Priština. Europe does not have an interest in one of the sides, that is, Belgrade, having to accept a decision that is humiliating for the Serbian people.” — 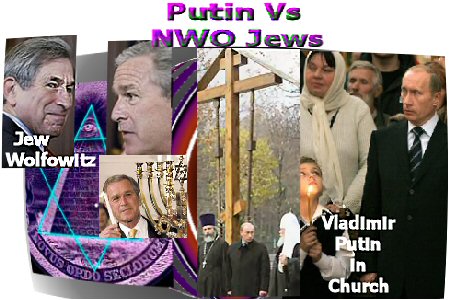 NWO JEWS AND THEIR HATRED OF CHRISTIAN SERBIA

The Trilateral Commission, The Council on Foreign Relations, and The Bilderberg Group, all have a lot in common - Jewish membership. These 3 Groups also share a hatred of nations that oppose their “multiculturalism” which translates into “mult-religions” with no monolithic opposition against them. Serbia is an Orthodox Christian nation. The Jews want to destroy the Orthodox Christian nation of Serbia because it stands in their way of multi-cultural globalization where no culture, that is, religion, dominates.

Here are the Christian-hating Jews — all interconnected:

VLADIMIR PUTIN AND PATRIARCH ALEXY II are very close both personally and in their Christian world view. At the European Council held October 2 2007 in Strasbourg, Patriarch Alexy II said:

— “Any kind of unilateral resolution that doesn’t take into account the opinions of the Serbian people will only result in injustice. We cannot silently stand by when Orthodox Christian monuments and shrines are being destroyed.” —
See: Crucified Kosovo

— “We want Serbia to retain its integrity. We do not want somebody’s evil will to alienate Kosovo from people who have suffered long enough and have the right to keep this holy place. It is necessary to keep fighting for preservation of the unity of the fraternal Serbian state until the very end.” —
See: Russian Orthodox Back Serbia In Kosovo Dispute

And pointing to the New World Order oligarchs, the Orthodox Christian Vladimir Putin said in a November 2007 speech to Russian Military Cadets:

— “There are those who would like to build a unipolar world, who would themselves like to rule all of humanity.” —Reuters HERE

HOW CAN WE STOP THE JEWS
OF THE NEW WORLD ORDER?

WE CAN STOP THE JEWS of the New World Order by supporting Russian President Vladimir Putin. Support for Vladimir Putin is support for Christian dominance in the Balkans.

We must understand that the Jewish slogans, “democracy” and “majority rule,” are no longer viable parameters. If we wish to apply this Jewish way of scheming, then we must insist along with the Mexican-American independence leaders, that America’s Southwest be returned to Mexico, according to majority rule.

THE JEWS OF The New World Order want to turn over Orthodox Christian Kosovo to the Albanian Muslims. We must not allow them to do this. We must not fall for their Jewish lie, “ethnic Albanians must have their majority rule.”

Jews do not care about “majority rule.” They are only 2% of the American population and they, the minority, are ruling our lives. Do we really want the Anti Christian Jews to rule our lives?

There is one world leader who does not want Anti-Christian Jews to rule the lives of Russian and Serbian Christians. This is why I, and many other Orthodox Christians, shout it out, “Many Years To Russian President Vladimir Putin!”

And: “Putin’s Purge Of The Rothschild Money Changers ” Click Here