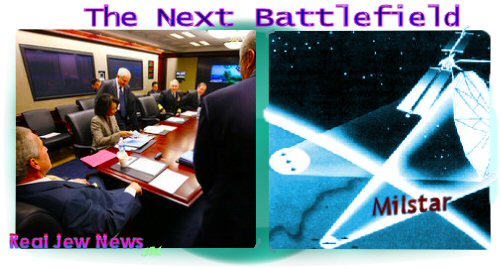 This strategy was enacted in the midst of protests over the Bush Doctrine of pre-emptive war. This new security strategy abandons all past concepts of deterrence.

The document advances a justification for a colossal escalation of American militarism. It asserts the ‘right’ of the US to use military force anywhere in the world against any country it believes to be a threat — (Read: Israel’s enemies).

The document begins with an arrogant boast:

“The US possesses unequaled strength and influence in the world. The US national security strategy will be based on a distinctly American internationalism.” Here.

A crucially related US document called “Vision for 2020″ was published in February 1997 by the US Space Command. (The US government has removed the historical & official record of the document. But it is still recorded as an historical document Here & Here).

The mission statement at the head of Vision for 2020 reads: “US Space Command — dominating the space dimension of military operations to protect US interests and investment.” There is no mention of democracy or human rights…

ON APRIL 11 2001, a conference was hosted by Vladimir Putin in Moscow, called, Space Without Weapons. Hundreds of heads of space agencies, prominent diplomats, senior officials of the UN, scientists, cosmonauts, space engineers and businessmen from all over the world were in attendance.

The participants affirmed their allegiance to UN Resolution 55/32, entitled, “Prevention Of An Arms Race in Outer Space, which called for “the use of outer space to be for peaceful purposes and carried out for the benefit of all countries.”

At the conference, Putin implored all nations to prevent a new arms race in outer space:

“We must by joint efforts preserve a peaceful space. Russia has made its choice for a weapon-free space. We are against expenditures for a new arms race for purposes which are not compatible with the true needs of our people and all of mankind” Here.

But the Bush Administration has ignored Russia’s plea. Using the events of 9/11, Bush has obtained the funding for the use of outer space for US militarization.

Shortly before Bush took office, a document entitled Rebuilding America’s Defenses was published by a Jewish neocon organization called the Project for the New American Century, of which members included the Zionist Jews, Paul Wolfowitz & Richard Perle. Dick Cheney and Donald Rumsfeld were also prominent members. These and many other members would go on to be central figures in the upcoming Bush administration.

This document focused on getting more tax money allocated for the US Space Command’s project to weaponize and control outer space.

On the night of 9/11, Secretary of Defense, Donald Rumsfeld, was prepared to use the 9/11 attacks to obtain more money for the US Space Command. In front of television cameras, Rumsfeld berated Senator Carl Levin, then chairman of the Senate Armed Services Committee, saying, “Doesn’t this sort of thing convince you that an emergency exists in this country to increase defense spending?” Here.

This strategy worked. Congress immediately appropriated an additional $40 billion for the Pentagon and its project for the weaponization of outer space. 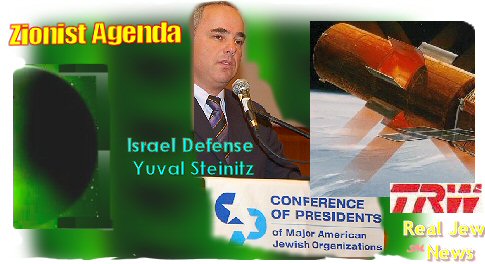 ONLY THE US & ISRAEL voted ‘No’ on the UN’s Resolution, entitled, Prevention Of An Arms Race In Outer Space in 2002.

The Zionist-Militarist State of Israel has much to gain by its alliance with the US in the weaponization of outer space. Military corporations which work in conjunction with Israel are the recipients of the billions of dollars allocated for US space wars. Companies such as Lockheed Martin, Aerojet, Boeing, TRW, and Vista Technologies, all work with Israel.

The “Space-Based Laser Project” built by TRW, which has many joint projects with Israel, is only one example of US military projects being permeated by military technology developed in Israel.

On June 11 2005, in a rare public discussion on Israel’s military use of space, Yuval Steinitz, Chairman of the Israel’s Defense and Foreign Affairs Committee, said that Israel “must compensate for its lack of strategic depth on land by expanding use of space-based attacks.”

Specifically, Steinitz urged Israeli defense and industry officials to “consider future developments of satellite-attacking lasers and ship-based missiles that can strike the skies.”

For More See: “US State Department Is Run By Jews” Click Here


And: “The Zionist War Party In America” Click Here