Russia & The Future Of Ukraine 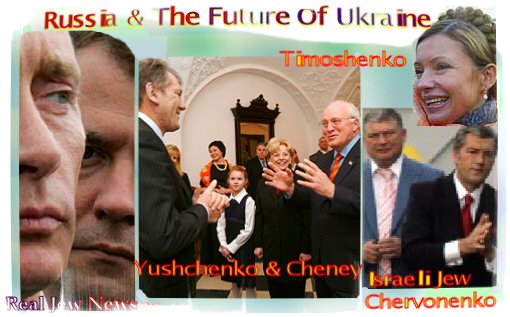 RUSSIA & THE FUTURE OF UKRAINE
By Brother Nathanael Kapner, Copyright 2007-2009

Unique Source: Ukraine-Yushchenko Reveals Why Israel Backed Him @ Rense.com Here
RUSSIA CLEARLY UNDERSTANDS that the Zionist-occupied West has its puppets in strategic locations. Ukraine’s President, Victor Yushchenko, happens to be one of these Zionist-controlled puppets.

The current focus of contention between Moscow & Ukraine centers on the Black Sea port city of Sevastopol, located on Ukraine’s Crimea peninsula. Russia’s Black Sea Fleet is based here under an agreement signed by the two ex-Soviet states.

Kiev’s jurisdiction over the Crimea peninsula remains a volatile issue for the Crimea’s largely Russian populace, whose political, economic, and cultural affiliations are closer to Moscow than to Kiev. The Russian Bloc Party, a pro-Moscow–anti West group based in the Crimea, has stepped up its anti-NATO rhetoric in recent days.

On August 13 2008, Yushchenko rankled an already bristling Vladimir Putin, by announcing tougher “permission” rules on Russian naval moves in the Black Sea. Tensions between Russia & Ukraine had already been simmering due to Moscow’s opposition to Kiev’s efforts to join NATO and its plans to cooperate with US missile defense plans. It was only last spring of 2008 that Putin threatened to “dismember” Ukraine by detaching the Crimea if Yushchenko continues his pursuit of the West’s agenda in the area.

Russia’s lease in Sevastopol does not expire until 2017. Yet Yushchenko is now insisting that Russia leave Sevastopol when the lease expires. Moscow has made it clear it will refuse to do so. Thus, a “break-away” state of Crimea, dominated by ethnic Russians with diplomatic ties to Moscow, could very well be a solution that would satisfy Vladimir Putin. 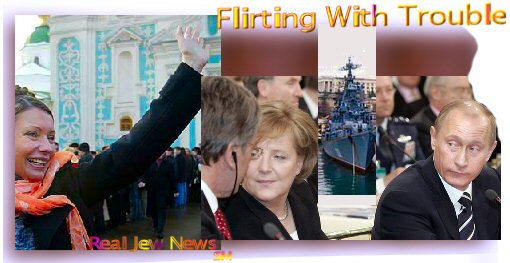 POLITICAL CHAOS FACES President Yushchenko due to rising tensions in the Black Sea. Already a feud between Yushchenko and Prime Minister Yulia Timoshenko is intensifying over Russia’s opposition to Ukraine’s pro West policies.

Yushchenko’s Chief of Staff, Andriy Kyslynskyi, recently said that Timoshenko was plotting to use a deepening crisis with Moscow to take over as President:

— “The actions of the current Prime Minister show signs of high treason and political corruption. We said last week that Timoshenko systematically works in the interests of the Russian side.” — Here & Here.

Kyslynskyi added that “Russia is considering supporting Timoshenko in the Ukrainian 2009 Presidential elections on the condition that she adopt a passive position on the Georgian conflict.” Thus far, Timoshenko has remained silent.

On August 18 2008, ten days after the outbreak of the Georgian conflict, Ukraine’s Business daily, Delo, announced that Russia began a trade war against Kiev. Delo reported that heavy industry in the country’s eastern oblasts bordering Russia could be hard hit by shortfalls in deliveries of Russian coking coal.

Since these oblasts are made up of a Russian-speaking majority, they are inclined to support co-operation with Russia. A weakened economy could then persuade the residents to ‘break away’ from the pro-Western Ukraine.

Putin’s warning that the West’s decision to grant independence to Kosovo
for the sake of “ethnic Albanians” would backfire -
is coming home to roost in the Zionist-controlled Ukraine.