Obama’s Turn To Woo The Jews 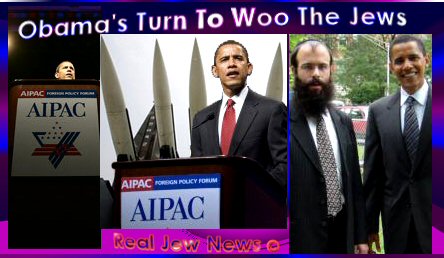 Or Send Your Contribution To:
Brother Nathanael Kapner; PO Box 547; Priest River ID 83856
E-mail: bronathanael@yahoo.com
BARACK OBAMA IS NOT going to miss the chance to get big Jewish bucks for his campaign.


That’s why at his June 4 2008 speech to the American Israel Public Affairs Committee (AIPAC) in Washington DC, Obama over-exerted himself to outdo McCain in wooing the Jews.

Here Is An Excerpt Of Obama’s Speech:

— “Today I am among friends who share my commitment to make sure that the bond between the United States and Israel is unbreakable today, tomorrow and forever.

I saw some of the images of the Holocaust at Yad Vashem and they never leave you. Each of us bears witness to anyone who would deny these unspeakable crimes. We must mean what we say when we speak the words “never again.”

Those who threaten Israel threaten us. I will bring to the White House an unshakeable commitment to Israel’s security. As president, I will provide $30 billion in military aid to Israel over the next decade.

The Iranian regime is pursuing a nuclear capability and its president denies the Holocaust. (So what? BN) The danger from Iran is real and my goal will be to eliminate this threat.

I will do everything in my power to prevent Iran from obtaining a nuclear weapon. Let there be no doubt: I will always keep the threat of military action on the table to defend our security and our ally Israel. Sometimes there are no alternatives to confrontation.

This is the change we need in our foreign policy. Change that restores American power and influence. 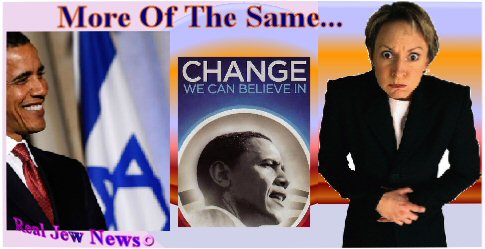 PEPTO BISMOL IS NEEDED FOR NAUSEATING SPEECHES TO JEWS
Here Is A Pepto Bismol Regurgitation Of Obama’s Speech:

* “The bond between the US and Israel is unbreakable forever.”

“Isn’t it nauseating how I kowtow to the Jews?”

* “I saw some of the images of the Holocaust.”

“Isn’t it nauseating to be bombarded by Holocaust hype?”

* “I will provide $30 billion in military aid to Israel.”

“Isn’t it nauseating to give all this money to a racist nation?”

* “I will always keep the threat of military action towards Iran.”

“Isn’t it nauseating to have continual war mongering Presidents?”

*“This is the change we need in our foreign policy.”