US Judges Tout The Talmud 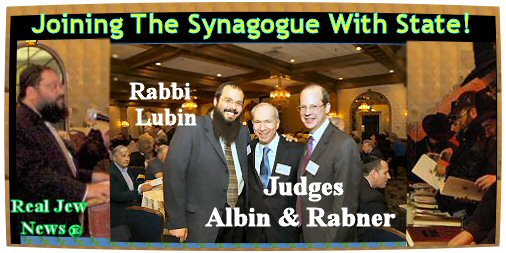 US JUDGES
TOUT THE TALMUD

Disclaimer: Michael Hoffman’s Name & Link As Source
Must Appear On All Reproductions Of This Article

THERE’S NO SUCH THING as separation of ’synagogue and state’ in America. The hypocrisy of the Judaics in America is again brought to the fore with the recent Talmudic Symposium held in New Jersey on July 17 2008.

The Symposium was hosted by the Institute of American and Talmudic Law. Some 200 Judaic & Gentile attorneys were present who listened “spellbound” to the guest speakers: New Jersey Supreme Court Justices Barry Albin and Stuart Rabner - both Judaics.

The Symposium offered NY & PA Continuing Legal Education Credits for those attending. Can you imagine any CLE credits ever offered for attending a Symposium held by Christians on New Testament Jurisprudence? Not on your life. 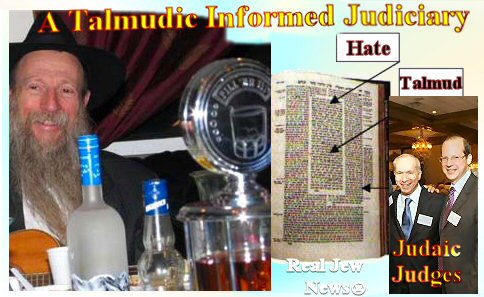 US JUDGES ALBIN AND RABNER would doubtless tear down a Nativity Scene put up in their New Jersey turf.

But when it comes to touting the Talmud at a Judaic Symposium they simply don’t believe in “separation of synagogue & state.” America has now become so completely “Jewified” that Judaic judges like Albin and Rabner don’t have to defend their sponsorship of Judaic religious functions.

In typical Jewish-nerve style, the founder of the Institute of American and Talmudic Law, Rabbi Shalom Lubin, (he advocates the Talmudic law of killing the parents and siblings of Palestinian suicide bombers), made the following Press Release:

— “Boruch Hashem! (A stupid Judaic greeting meaning “Bless the Name” since Jews hate to say the name “God”). The Jewish Law Symposium this year had 200 of the top lawyers and judges in the State who were exposed to the Talmud and it’s relevance in life. They walked away visibly impressed” — Here.

This incorporation of Talmudic law into the US Judiciary System raises the question: “Will Gentiles who are looked upon as subhuman in the Talmud be granted equal rights in a Talmudic informed judiciary?” Not on your life…

And: “Kill Civilians? The Talmud Tells Me So” Click Here