3 Main Characters Of The Jewish Lobby 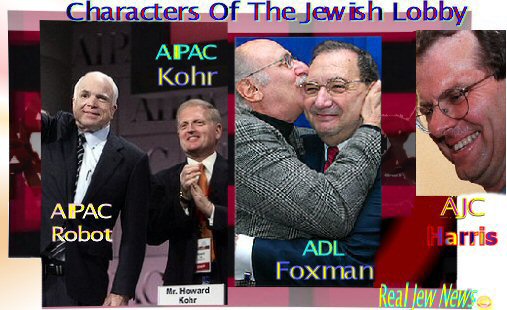 3 MAIN CHARACTERS
OF THE JEWISH LOBBY

Or Send Your Contribution To:
Brother Nathanael Kapner; PO Box 547; Priest River ID 83856
E-mail: bronathanael@yahoo.com
TO UNDERSTAND THE JEWISH LOBBY IN AMERICA it is essential to know the characters that run it. Here are the 3 main characters of today’s Jewish Lobby:

Looking at these 3 Jewish lobbyists please know that Zionist Jews have as their first priority that which benefits Zionism - *not* what benefits America.

HOWARD KOHR: This Jewish lobbyist has a lot of nerve. Here he is demanding Congress to make sanctions against Iran which includes a veiled threat of war:

— “We cannot afford to wake up one morning to a nuclear Iran. We will ask Congress to support House Resolution 362 sponsored by Congressman Ackerman which calls for a naval blockade of Iran.

“We must communicate forcefully to the Congress and to every Presidential candidate that sanctions are only a means to an end and never an end in themselves.” — AIPAC Conference June 2008 Here.

ABRAHAM FOXMAN: Foxman finally said something true in this June 2007 interview with the Jerusalem Post:

— “There is now a new form of American anti-Semitism much like the old form. This new form says that Jews run the banks, the newspapers, & Hollywood. The difference is that now that perception is gaining ground in the mainstream.” — Here.

DAVID HARRIS: This Jewish lobbyist proves the axiom that ‘Jews stick together.’ Here Harris admits this in his June 29 2008 AJC Blog entry:

— “All Jews are responsible one for the other. This is the spirit in which I was raised.

“I was surrounded by all kinds of Jews - unbelieving and observant, engaged and apathetic. In spite of our differences we were all one community.” — Here.

I Recommend That Jewish Lobbies Be Restrained!