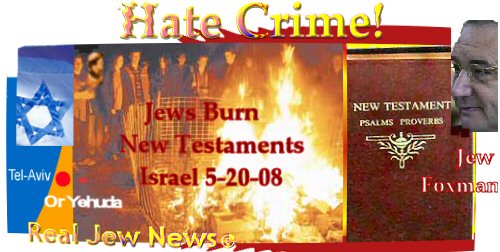 
Thousands of “Hate Crimes” have been committed by the State of Israel. And now the latest “Hate Crime” has been perpetrated by an entire city in Israel: the burning of hundreds of copies of the New Testament.

This “Hate Crime” was committed by a multitude of Jewish religious school students in the city of Or Yehuda adjacent to Tel Aviv on May 20 2008.

The burning of the New Testaments took place in response to an order by the Mayor, Uzi Aharon Here. The mayor went through the city in a loud speaker car calling on the Jewish youth to retrieve and burn the New Testaments given to Ethiopian Jews in the city by Christian missionaries Here.

“I certainly do not denounce the burning of the booklets“ Aharon told Associated Press. And in a radio interview Aharon defended his actions calling the New Testament bonfire: “purging the evil among us.”

The Jewish Anti Defamation League (ADL) having convinced 45 States to enact “Hate Crime Laws” defines a Hate Crime as: “a crime motivated by a bias.” Certainly the Jews are guilty.

But where is the ADL’s condemnation? Nothing doing. Because Jews couldn’t care less about “Hate Crimes” unless it serves their own selfish interests. 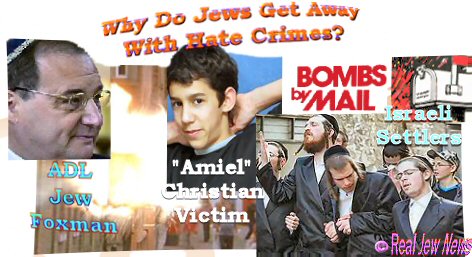 ON MARCH 21 2008 the teenage son of a Christian missionary was seriously wounded when a package bomb delivered to the family’s West Bank home went off in his hands Here.

The bomb was delivered in one of the gift baskets Jews typically exchange on the Purim holiday occurring at the time.

Amiel Ortizi, 15 years old, was the recipient of the bomb. He is the son of Reverend David Ortiz, a Christian missionary who leads a Christian congregation in Ariel, a West Bank Jewish settlement town.

“He’s in serious condition and hooked up to a respirator with shrapnel all over his body,” Dr Efrat Har-Lev of Beilinson Hospital told news reporters Here.

Most of Amiel’s internal organs were severely injured from the blast and he has burns all over his tender youthful body Here. The Israeli government continues to be indifferent to the crime.

In another recent “Hate Crime” perpetrated by Israeli Jews, 2 mayors in the West Bank were victims of car bombs by Israeli Jewish settlers Here.

Bassam Shaka’a, the mayor of Nablus, had both legs amputated. And Karim Khalaf, the mayor of Ramallah, lost a foot. The case against the criminal Jewish settlers was dismissed because of “general civil unrest in the area.”

HOW DO WE DEAL WITH JEWS WHO COMMIT
HATE CRIMES IN ISRAEL?

1) Insist that THE ADL Apply “Hate Crime” Standards To Their Own People.

2) Insist That Military Aid To The Anti-Christian State Of Israel Be Stopped.

3) Insist That The Multi-Billionaire Jewish Lobbys Repatriate All Israelis.

4) Insist That Judaism Be Defined As Inherently “Anti-Christian.”

ONLY THEN CAN THE MIDDLE EAST
BECOME A CHRISTIAN REGION ONCE AGAIN!