McCain Bought By Jews Via Rothschilds! 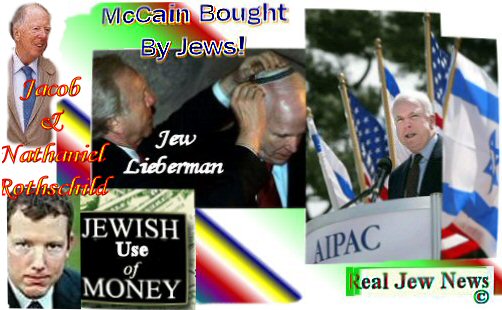 McCAIN BOUGHT BY JEWS
VIA THE ROTHSCHILDS!


On March 20 2008, the Jews “Lord” Jacob Rothschild and his son, the “Honorable” Nathaniel Rothschild, invited McCain to attend a fund-raiser in the posh London Spencer House on March 20 2008 Here.

Many are concerned about McCain’s Rothschild-connection for 2 reasons:

$1 The Issue Of Foreign Contributors To A USA Election:

— “FECA prohibits any foreign national from contributing, donating or spending funds in connection with any election in the United States either directly or indirectly.” — Here

$2 The Issue Of The Rothschild Involvement In The Awarding Of The US Air Force Tanker Contract To European Airbus (EADS) Over America’s Boeing:

* The Rothschilds through their Business-Intelligence Group, “Diligence,” have a large financial stake in the European Aeronautic Defense and Space Company (EADS) headquartered in Paris. EADS bumped Boeing out of the running for the US Air Force Contract Here.

* Thus McCain is a traitor to American interests for currying up to the Jewish Rothschilds who took away thousands of American jobs in their usurping of the US Air Force Contract with Boeing Here. 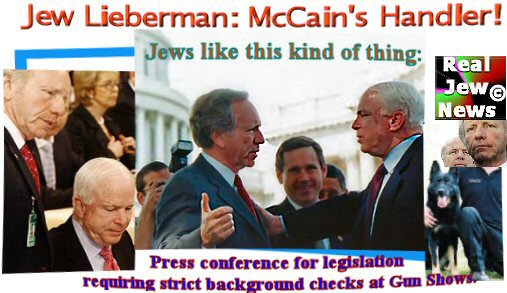 “McCain will not do anything that will compromise Israel’s security.”

“McCain was fighting for the surge in Iraq when it was unpopular.”

See: “Why Jews Should Vote For McCain According To Lieberman” Here 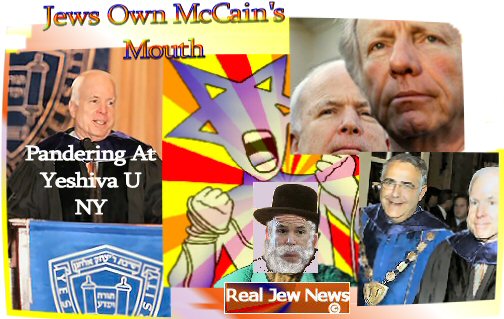 IN AN INTERVIEW WITH Beliefnet in September of 2007 Here McCain said:

— “Since this nation was founded on Christian principles, I would prefer someone as President who has a solid grounding in the Christian faith. The Constitution established America as a Christian nation.” —

No sooner did the Jews threaten to take their money from McCain, did the coward retract:

— “I only meant to say that the US was founded on Judeo-Christian values which is basically the rights of human dignity and human rights. I believe that anyone of any faith can be President.” — Here

Indeed, John McCain is an unprincipled man who will say anything, (always contradicting himself), simply to get votes. In a 2007 Massachusetts forum to court the Gay Vote, McCain said:

— “I think that gay marriages should be allowed if there’s a ceremony kind of thing. I believe that if people want to have private ceremonies that’s fine.” — Here

HOW CAN WE STOP THE JEWS
FROM CONTROLLING POLITICIANS
LIKE JOHN McCAIN?

#1 Move to a remote island in Greece.

Pray To Jesus Christ That By The Power Of His Cross -
The Jews Who Bribe US Politicians Will Be Conquered!