1649: Jews finance Cromwell’s beheading of Charles I. Cromwell reciprocates by allowing Jews to return to England.

1694: William of Orange, King of England, asks Jews for financial help to keep the Stuarts at bay. Jews issue bank notes on interest to William of Orange and first central bank has its beginnings.

1750: The Jew, Mayer Amschel Rothschild, becomes prime money lender to the Crown. The House of the Red Shield is established.

1808: Napoleon becomes master of Europe. He issues a decree which the Jews termed the Decret Infame (Infamous Decree). The Decret Infame placed many justifiable restrictions on the Jews. Jews plan their revenge.

1814: The Battle of Waterloo signifies the end of Napoleon’s heroic anti-Jewish rule & the Christian domination of Europe. Both James Rothschild of France and Nathan Rothschild of England finance Wellington’s victory over Napoleon at Waterloo. 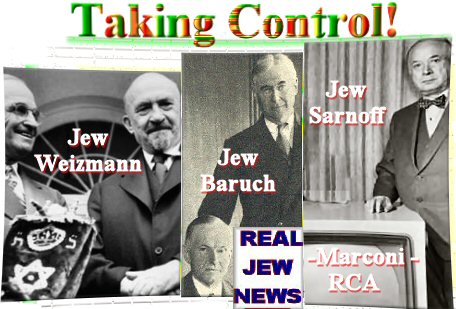 1815: James & Nathan Rothschild order European rulers to assemble at the Congress of Vienna. The Rothschilds draft a plan that would make it impossible for another Napoleon to rise to power by creating a European “balance of power.”

~ Thus if one European nation became too powerful, the other nations would rally and attack it. This meant that a nation that the Jews considered their enemy, would undergo punitive measures from Jewish “pawns.”

1848: Jews demand that the Gentiles turn over their property to them through the book The Communist Manifesto written by Rothschild-agent, Karl Marx.

1890: The largest munitions factory in the world, Vickers of England, is established by the Rothschilds. The stage is set for the Rothschild’s engineering of World War I and all future wars.

1906: Guglielmo Marconi’s invention of the radio is marketed and taken over by the Jew, David Sarnoff. Sarnoff establishes the Marconi Company in England and RCA in America. Thus begins the Jewish control of the media.

1914: The Vickers Munitions Company, owned by the Rothschilds, engineers World War I.

1916: Germany is winning the war. Zionist Jew, Chaim Weizmann invents a deadly poisonous gas and promises England its use and American intervention if they will support Zionism. Prime Minister Lloyd George accepts the offer.

1917: Lord Balfour makes formal Lloyd George’s capitulation to Weizmann in a letter to Lord Rothschild known as The Balfour Declaration. The Zionist theft of Arab lands is made “official.”

The Stage Is Set For World-Wide Jewish Domination!

Only A Christian Revival Can Stop The Jews!