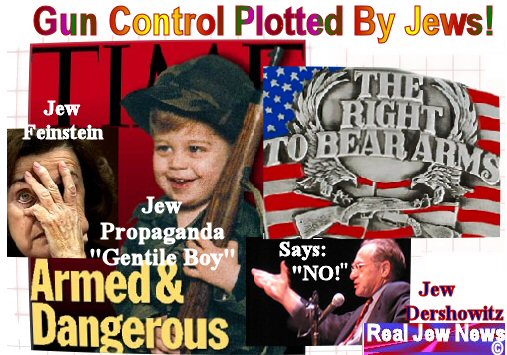 Or Send Your Contribution To:
Brother Nathanael Kapner; PO Box 547; Priest River ID 83856
E-mail: bronathanael@yahoo.com
JEWS ARE PLOTTING TO SEIZE our “right to bear arms.” This “right” is supposedly guaranteed by the 2nd Amendment of the US Constitution.


Here are the Jews who want to seize the guns of American citizens:

2001: In a speech to a Jewish audience at the Jewish Community Center of Creve Coeur, Harvard Jew Alan Dershowitz said:

— “I support abolishing self-defense. No one has the right to take responsibility for their own defense. That’s what the police are for. Everyone who is arming themselves for self-defense are wrong. 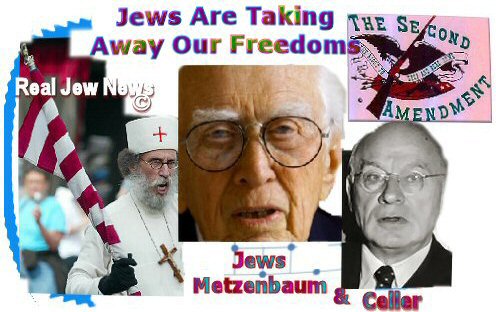 THE AMERICAN JEWISH COMMITTEE IS ONE OF THE MOST powerful Lobby Groups in America. US Senators and Congressmen are beholden to the $$$ power of the AJC which “buys” Bills that support its Jewish agenda.

The American Jewish Committee brags about the number of Gun Control Laws they have helped to ram through, or rather, “buy.” According to their own Website:

HOW CAN WE STOP THE JEWS
FROM TAKING AWAY OUR CONSTITUTIONAL RIGHTS?

+ Accept the fact that Jewish $$$ decides what Bills get passed in Congress & the Senate.

+ Accept the fact that the Jews run America and will continue to deprive us of our freedoms.

+ OR: Pray To Jesus Christ That By The Power Of His Cross -
The Jews Of America Will Be Conquered Once & For All Time!

For More See: “America Is Run By Jews! ” Click Here

And: “How The Jews Are Destroying America” Click Here