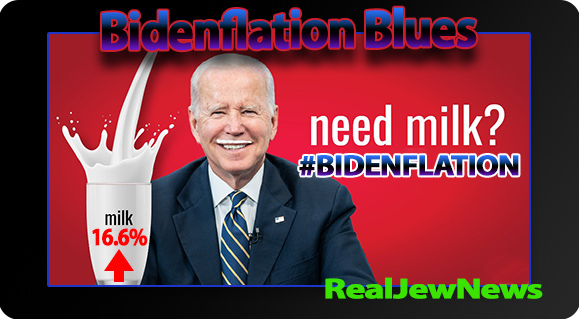 IT’S A NO BRAINER that a full-scale recession has begun in America.


As inflation outstrips wage growth the result is a drastic reduction in consumer spending.

Any high schooler with even scant insight knows that consumer spending accounts for two thirds of the US economy.

This in turn affects businesses as they experience a decrease in sales, with consequent layoffs, and flattening of employment opportunities.

Somehow, Janet Yellen, with her twisted Jew-illogic insists “there is nothing to suggest the US will have a recession.”

This is JEWSPEAK to dupe the goys into believing that inflation, recession, and economic downturns just happen out of thin air like the money they print at their Jew-owned FED.

That the goyim should point the blame on Bidenflation—that is, on the slew of Jews that run their pervert puppet Biden—is off limits to the goyim, those deplorables the Jews despise.

Added to this catastrophe-in-the-making is seeing the Jew-inspired sanctions against Russia backfiring bringing on a skyrocketing of bent crude oil soaring soon above $150 a barrel. 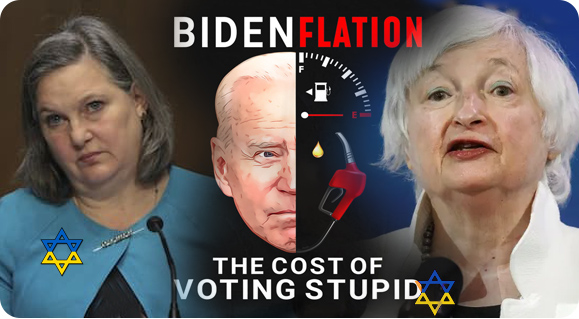 TURNING SUMMER INTO A BUMMER is just one Bidenflation hummer.

Record prices at the pump constrain consumer spending since filling up just to go to work leaves nothing left over for shopping.

That spells disaster for the economy.

Pile the disaster on with high diesel prices which overwhelm food prices.

Truckers running on diesel and farmers using diesel for heavy machinery add to the cost of food deliveries and production.

This puts milk, bread, beef, and other staples subject to non-stop rising prices.

Fertilizer bills jumped to plus-29% this year causing growers to cultivate less acreage, and use less fertilizer, all of which hurts yields.

Is this a Jew-touted “Putin Tax?” (Even Fed-chair Powell says “no.”)

IT”S A JEW TAX brought to the goyim by Vickie Nudelman at State and Janet Yellen at Treasury via their sanctions against Russia which increased the price of Russian fertilizers reaching American shores.

Any high schooler with even scant insight knows that skyrocketing gas prices caused by Jew-led sanctions on Russian gas overwhelms fertilizer prices since gas is used to produce potash, ammonia, urea, and other soil nutrients.

Biden’s slew of Jews are to blame for Bidenflation.

The senile old pervert can’t even park a stationary bike without falling.

When Jews Run A Country Here!

Or Send Your Contribution To:
The Brother Nathanael Foundation, POB 547, Priest River, ID 83856
E-mail: brothernathanaelfoundation([at])yahoo[dot]com
Scroll Down For Comments