House Of Rothschild Controls Our Lives 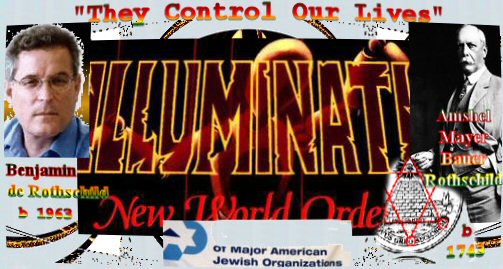 What with this reporter growing up as a Jew and with recent revelations now coming to light, Real Jew News presents Part I of The Jewish House Of Rothschild Controls Our Lives:

The Jewish House Of Rothschild has been in control of the world for a very long time, their tentacles reaching into many aspects of our daily lives beginning with their global financial power.

The Federal Reserve Bank of New York is centrally controlled by Nathan M. Rothschild & Sons of London. The names of these banks are all obviously Jewish names– the “Rothschild” name was originally “Bauer.”

The family name, “Bauer” became known as Rothschild (red-shield or rotes-schild in German) in the 18th century when a financial dynasty was founded in Frankfurt by the Jew, Mayer Amschel Rothschild (Bauer), working in league with the Illuminati House of Hesse and others.

The red-shield, with the so-called “Star of David,” is an occult symbol from the 13th Century occult Kabbalah and only became associated with Jewish people after the Rothschilds adopted it for themselves. It has absolutely no connection to “King David” as Jewish historical sources confirm.

It was the Rothschilds, who seeing that Germany was granted rights by the Ottoman Empire in the early 1900’s to build their oil reserves into refineries, worked behind the scenes to destroy Germany after it had essentially won the war in 1916. This they did by funding Britain along with a promise to bring the Americans into the war in exchange for rights to Palestine to build a Zionist, Rothschild-controlled state in Palestine.

I now refer you to a very frightening Time Line Of The Rothschild’s Here.

Next week will be Part II of The Jewish House Of Rothschild Controls Our Lives.