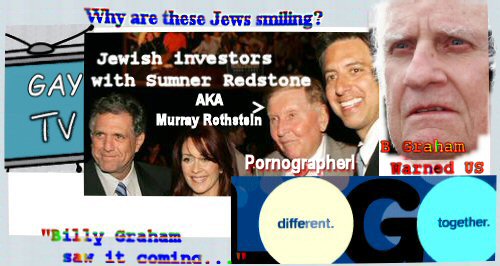 Rothstein told Jewish investors in 2005 that its proposed Gay cable channel “LOGO” would cost only $30 million to launch, but by 2007 would be worth over $1 billion.*

The Jewish investors have not been disappointed. Yet at the same time, millions of Americans, mostly American youth, are being morally corrupted by LOGO’s Anti Christian programming.

WHY DID MURRAY ROTHSTEIN CHANGE HIS NAME TO “SUMNER REDSTONE?”

Is “Murray” ashamed to have the public see that it is a Jew who is behind much of the pornography, homosexuality, and Anti Christian programming on TV?

Is “Murray” afraid of a backlash against the Jews for subverting Christian culture?

Well, the time has come my dear “Murray” boy, for you to be exposed!

And the list goes on and on. Lamentably public opinion is formed by Anti Christian Jews who control the Media in America.