Killers Of The Deal 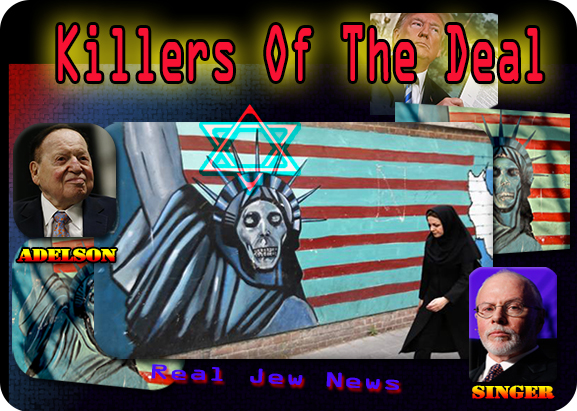 THEY’RE JEWS…KILLERS… killers of the deal, slayers of the Iran nuclear deal.

Donald Trump is not his “own man” and never was. He lied about “funding his own campaign” when it was the Kushners in Jersey that bankrolled his campaign from the start.

Adelson was the biggest donor of the sinister swarm at $25 mil to the Republican Party in order to support, that is bribe, Trump into doing Jewry’s bidding.

Trump made lots of promises during his campaign but only two came true since they were aimed at pleasing his fat cat JEW donors — Adelson, Singer, Marcus, and the Republican Jewish Coalition:

1. Killing The Iran Deal
2. Moving The Embassy To Jerusalem

All the rest have fallen to the ground, the ones benefiting the hapless goy like bringing jobs back home, and stopping useless spending on wars (for the Jews) abroad. 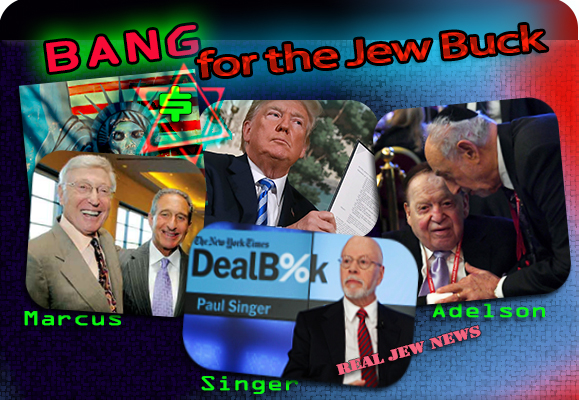 THE ART OF TRUMP’S ‘NO DEAL’ is an amateurish stab at wrecking US foreign policy.

A fifth grader would flunk his history course for thinking up such an ill-suited reneging.

Some positive things have come of it — Trump has now officially and boastfully proclaimed Netanyahu’s foreign policy as America’s own for all the world to see.

And now the entire world can see for itself that the United States of Israel is an unreliable piker that will ditch any agreement just to please the Jews.

America signed on to an “international agreement” known as the JCPOA that involved six other participating countries:

Even a four year old understands what a promise-breaker is and the evils caused by betraying promises.

Who can trust a used car salesman who sells you a lemon?

Who can trust a country that sells you a matzah ball with a mole in the middle? 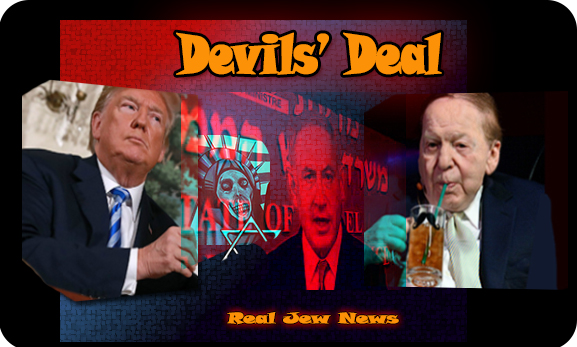 AMERICA’S WORD IS WORTHLESS thanks to the Jews who killed the deal…
…Trump is just a pawn in their game.

What do Jews care about America’s name? They’re JEW-FIRSTERS, not Americans. They’re all about what’s good for the Jews and let the goyim be dam#ed.

After all, Amerika is just a great beast of burden for the drunken Zionist whore to ride.

Not only did Trump—(in pleasing his Jew-masters)—tell the world “to drop dead”…he in effect told the goyim, “Jewish interests are my prime objectives.”

Do Americans know the ruin around them? That the ‘Deep State’ is simply the ‘Jew State?’

Does anyone dare to call out the Jew for turning the White House into a whore house for organized Jewry to screw over?

Will anyone call Congress what it really is, a sub-committee of the Israeli Knesset?

Democracy is an auction awarded to the highest bidder.

And that bidder: JEWS, are tossing Amerika into the trash can of history.

Trump: The Art Of Breaking A Deal Here

The Rise Of Three Israels Here