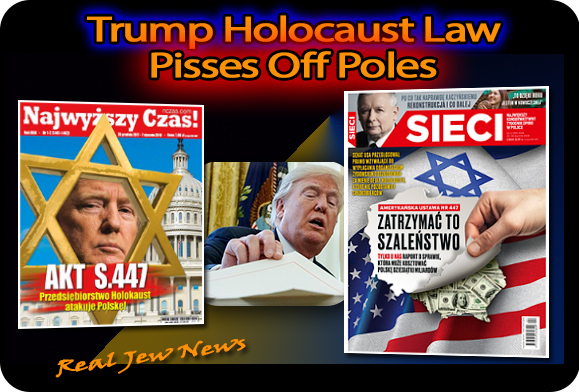 THE VULTURE-IN-CHIEF STRIKES AGAIN and the winners are the Jews who feed on the carcasses of their victims.

Last Wednesday, on the heels of enacting a Jew-pleasing policy in scraping the Iran Deal, Trump signed into law an Act that pressures European countries to ‘recover’ property ’stolen’ from Jews during World War II.

The victims of Jewish political intrigue this time are the Poles who refused to alter their recent law that prohibits blaming Poland for Holocaust crimes committed in its territory, for example, by refusing to call the detention sites, ‘Polish death camps.’

Known as the “JUST” Act—”Justice for Uncompensated Survivors Today“—the law does not mention Poland specifically.

However, Poland is the only European country that has not passed laws to compensate Jews who supposedly lost property and other assets during World War II…and given Poland’s refusal to cave under pressure, Jewry strikes back.

Jewish vengeance is a mean-spirited thing that translates into legislation…and Trump is the perfect stooge to shill for the Jews.

Trump needs all the Jew-support he can get vis-a-vis the ‘Cohen investigation’ on his back. 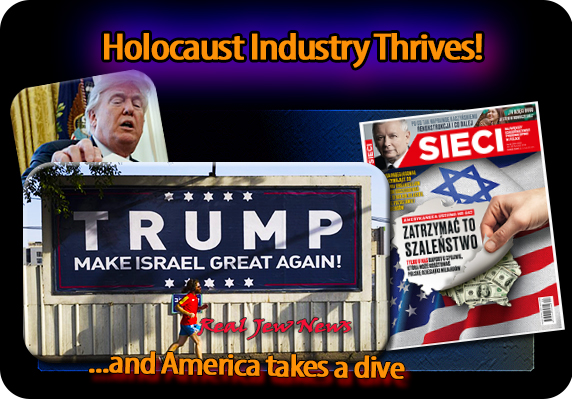 POLAND IS BLASTING the law as an innovation that fixes the restitution of property in Europe as a permanent fixture of US foreign policy independent of any countries’ policies.

Poland’s popular right wing media chimed in also with headlines such as: “Stop This Madness, It Will Cost Poland Tens Of Millions!”…and, “The Holocaust Industry Is Attacking Poland!”

“This law makes a clear statement about America’s uncompromising commitment to Holocaust survivors and their aspiration for justice.”

Perhaps some third-generation-removed Jewish nieces and nephews of all those aunts and uncles that were “GASSED” in the “SHOWERS.”

I grew up as a Jew in the 50’s and nothing was ever said to us about “gas chambers” or a “holocaust.” It wasn’t invented yet.

It wasn’t until the late sixties that the Holocaust Industry hit the presses and suddenly every Jew had an “aunt” who “died” in the “holocaust.”

It’s a scam. Uncle Sam plays the flimflam man. But Auntie Semite will soon strike back.

And: Notes From A Gas Chamber Here

And: How To Survive The Holocaust Here

And: Who Will Replace Elie Wiesel? Here

And: Modern Man In A Jewish Age Here