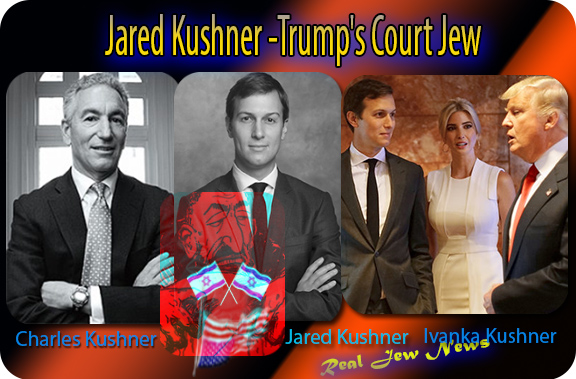 WHAT DOES A SON-IN-LAW have to do with Trump’s foreign policy? Much in every way: chiefly, because they’ve been connected at the hip for umpteen years.

Jared Kushner, a Jew, married Trump’s daughter Ivanka (who converted to Judaism) in 2009. But over the past thirty years Trump developed notable properties in New Jersey.

You don’t build anything in Jersey unless you play ball with the Jewish Kushner Dynasty, of which, Jared, heir to his father Charles’ endeavors, is a major player.

Married to Ivanka, probable ‘First Lady of the White House,’ Jared Kushner is poised to become a formal, but unpaid, (bypassing Federal anti-nepotism laws) adviser to his father-in-law Donald Trump, and appears to be the fulcrum between the Oval Office and Tel Aviv.

Trump’s own hyper-Israel stance is magnified by this relationship with hyper-Zionist Jared Kushner vis-a-vis the Kushner real-estate moguls who have strong ties to Orthodox Jewry, AIPAC, and Israel.

But the question arises: Why would a son-in-law (commonly not chummy with a father-in-law) be so tight…in this case, Kushner with Trump?

Is it because Trump is in hock to the Kushner Dynasty due to Trump’s costly properties in New Jersey? You don’t build in Jersey unless you play ball with the Kushners. 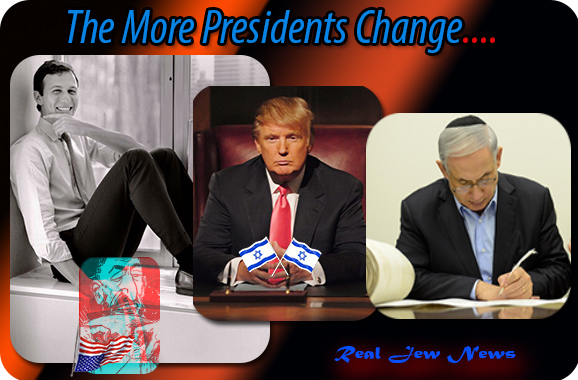 AT THE OUTSET OF TRUMP’s CAMPAIGN in the summer of 2015, Charles Kushner donated $100,000 to Trump’s Make America Great Again Super PAC.

Following close on the donation’s heels, Charles Kushner and his wife Seryl hosted a fund-raising reception for Trump at their Jersey Shore seaside mansion.

Political pay-offs confer a special place, even high places of dubious scruples, like the White House of Jewmerica.

Whether private loans or special favors wielded in Trump’s behalf, Donald returns the benefactions by touting Jared’s backing of the illegal colonial settlements and the annexation of “Judea and Samaria,” legally known as the “West Bank.”

SETTLEMENTS WERE NEVER Trump’s field. But Jared Kushner is a Likudnik.

Kushner and friends are urging Netanyahu to attend Trump’s inauguration.

From the Prince of the Jews’ mouth to Trump’s ear…the Court Jew will be close at hand.