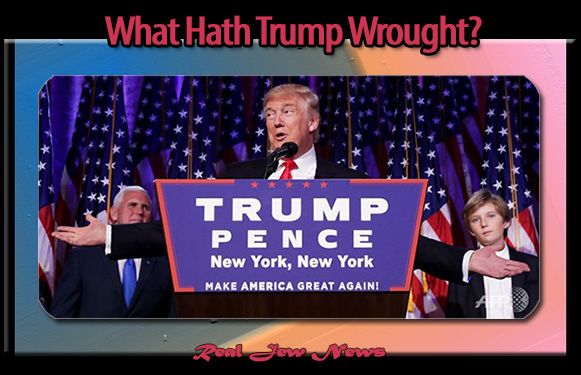 NOW THAT TRUMP HAS WON, it behooves us to reflect on what he has thus far accomplished.

One, he dismantled the Republican party; two, he exposed the media as being dishonest; three, he got Blacks and Hispanics to vote for him; four, he made Obama look like a loser (which he is); and five, he weathered through tons of bad press with iron defiance.

But Trump’s biggest feat of them all is when in the final leg of his campaign he exposed the “International Jew” as the cause of America’s woes, albeit not attacking the heads of the Fed or banking institutions as Jews per se, but exposing them as favoring corporate interests over America’s.

One line from his final campaign ad said it all:

“A global power structure has robbed our working class, stripped our country of its wealth, and put that money into the pockets of a handful of large corporations and political entities.”

“When I saw the ad I thought that this was something of a German Shepherd whistle, a dog whistle, to a certain group in the US. All with an international banking conspiracy to it and then a number of Jews. It’s an appeal to some of the worst elements of our country.”

In other words: “Thou shalt not show the face of a Jew in power to the goyim.”

But Trump did just that. He showed the Jew faces to his ‘deplorables.’ This might be the greatest achievement in the history of political campaigns. 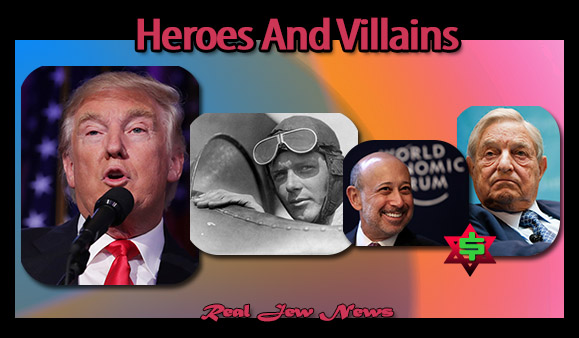 ANOTHER MAN, the American hero Charles Lindbergh, went even further than Trump, when he told the nation on September 11, 1941, that “Jews” were pushing the country into an unnecessary war with Germany.

For these words, the political establishment under FDR tarred Lindbergh as an “anti-Semite” and his civic reputation was ruined forever.

He emerged from the attacks by CNN, followed by the Washington Post and the ADL, unmoved and unconquered.

Then, beating Jewmerica’s sword into a plowshare at election night’s end, Trump closed his victorious campaign with,

“I want to tell the world community that we will seek common ground with all nations, not hostility; partnership, not conflict.”

Those are fighting words, NOT against nations (nor Russia) but against prominent figures of Jewish Finance Capital—Soros, Yellen, Blankfein—who’ve bled the goyim dry of their livelihoods and denied America a peacetime economy resulting in prosperity.

What hath Trump wrought? He hath exposed the Jew.

Now it’s time to rid the country of his ruinous influence.

For More See: Trump In The Eye Of The Storm Click Here

And: Generals March To A Neocon Tune Click Here