What To Do If Hillary Wins 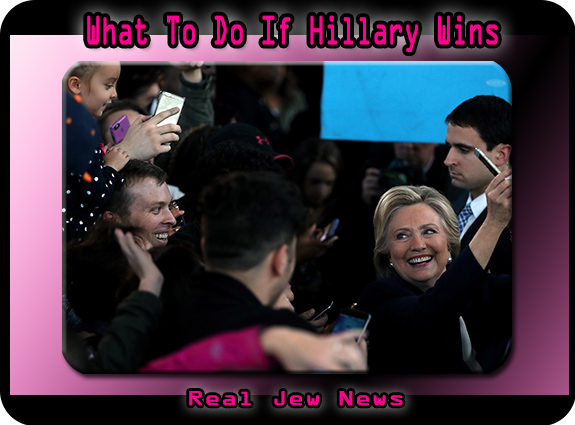 A TERRIBLE DREAD, Dear Diary, has crept over me with the thought that Clinton could be elected president on Tuesday.

Sometimes it feels like a deep depression and other times a feeling of defeat.

The Jews will win big with Hillary. They were by her side in Arkansas, and have owned her ever since they made her senator from New York. Political careers go nowhere in New York unless you sell your soul to the Jews.

And although Trump is up to his ears in Jews, (for starters, his daughter Ivanka married into the powerful Kushner real-estate dynasty), he still has a huge ego.

That means if Trump feels like he’s being pushed around or threatened by Jews, his ego won’t allow him to cower. That’s a plus when dealing with treachery and intrigue. Jews aren’t called the children of the devil for nothing.

And besides, Trump’s a maverick, and his proposed End The Offshoring Act is a troublesome issue for Jewish Wall Street…who will push Congress not to act on it, or add so many legal conditions that it is rendered toothless and useless.

Jewish finance owns Clinton and you can kiss your jobs goodbye forever if she’s elected.

Jewish Wall Street also owns the arms companies and you can kiss peace with Russia goodbye if Killary wins.

And any FBI investigation into her Clinton Foundation and emails will hit a brick wall if she gets in with a Clinton-loyal DOJ starting at AG on down.

Speaking of on down, Wiener is just a metaphor for getting screwed over by Jewish money and media power. Clinton gets a pass and everyone else gets the shaft. 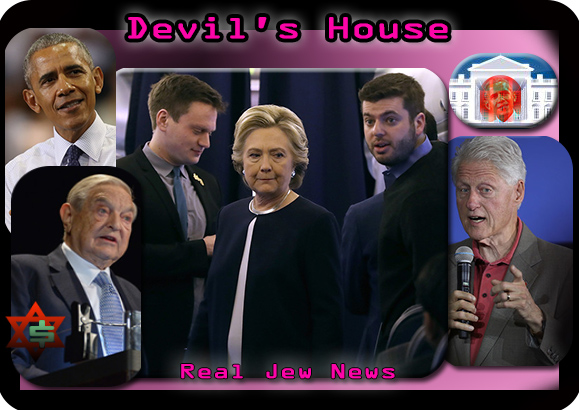 A DEEPER DESPONDENCY kicks in if Hillary’s elected president.

And that’s the specter of Bill Clinton occupying the Devil’s House once again.

For while Hillary is hosting LGBT dinners, Bill will be banging on every young intern he can get behind the devil’s doors.

Which brings me to my point, what to do if Hillary gets in:

1. Leave the country. (Not practical)

3. Engage in civil disobedience. (Chertoff and friends at DHS will snuff it out in a minute)

4. Throw a blanket over your head and earplugs in your ears for you’ll be hearing Hillary screeching for 4 more years.

WELL, THE OPTIONS don’t look good. Best to resign ourselves to the destruction of America under Hillary: morally, spiritually, economically, and demographically.

And best to circle the wagons in your traditional churches, because Christianity is the new counter-culture.

But, wait, there is something we can do. We can build bomb shelters like we did during the Cuban Missile Crisis, following the infamous Bay of Pigs.

For this political pig, Hillary Clinton, will do the bidding of George Soros and her billionaire Jewish donors, to bring on a nuclear war with Russia.

It’s called “population reduction,” “getting even,” and “satisfying a grudge.” Jews don’t take defeat in the Middle East vis-a-vis the Russian intervention in Syria lying down.

But bomb shelters, dear diary, could be our only and last defense.

For More See: What A Hillary Presidency Would Bring Click Here