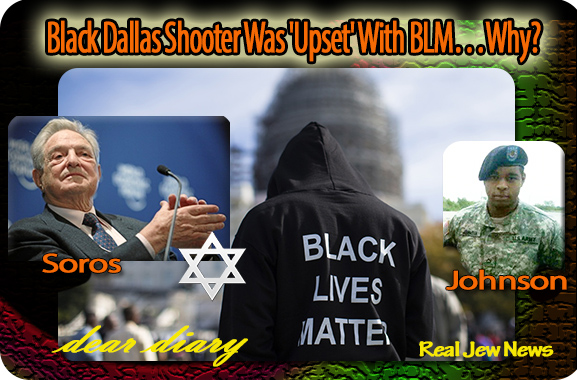 DEAR DIARY, THE NEWS about the Dallas shooting left me much troubled.

A peaceful march to protest perceived police violence against blacks organized by a black Baptist pastor turned into a nightmare.

Five police ended up being killed by a black sniper who was a veteran of America’s Afghanistan war.

What caught my eye was that the sniper Micah X Johnson told the cops when cornered in the El Centro College Garage that he was “upset” with Black Lives Matter.

Why was he upset? Dallas PD doesn’t have an answer.

This was never explained by the Jew-owned press and no one thought of pursuing this question: What was Johnson’s gripe against Black Lives Matter?

While the international Black Lives Matter movement is cast as a “virtuous” group fighting “injustice” against blacks, it has a suspicious origin since it was launched by three black leftist radical feminist lesbians in 2013.

With ties to George Soros’ ACORN Lobby, the founders (with apparent money and media enabling) exploited the acquittal of George Zimmerman’s in the Trayvon Martin case so as to bring their Marxist “racial rage” into the public eye.

As the group took wings using a Twitter hashtag, #BlackLivesMatter, they soon adopted the phrase “Hands Up–Don’t Shoot!” as its trademark slogan of the false Ferguson narrative built from the media-driven proven lies of Dorian Johnson–star witness in the Brown incident. Michael Brown never surrendered with his hands up.

A myriad of communist groups spurred the growth of Black Lives Matter, all under the advocacy of the Jewish-run Southern Poverty Law Center. 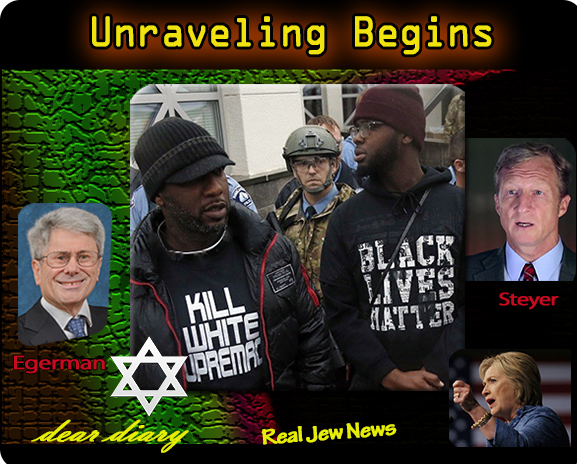 THE QUESTION arises: is Black Lives Matter a cover group to funnel money and arms to street gangs and militant blacks?

And aren’t these gangs touting themselves as “revolutionaries” and “freedom fighters?”

Sounds to me that Jewish communists (the same who put Obama in the White House) might get for themselves with the cover movement “Black Lives Matter” a repeat of the Bolshevik Revolution so as to create a whole new Jew World Order.

A clue to it all is to find out who’s funding Black Lives Matter and associated black race-baiting causes. (I smell “Jew” all the way.)

First of all, as of last January the leftist Jewish billionaire George Soros gave $34 million in seed money to Black Lives Matter affiliated groups in furtherance of his agenda to overturn a Christian-informed society.

Second, the leftist group, Democracy Alliance (DA)—launched by George Soros in 2006—met in DC last November with leaders of the Black Lives Matter movement to discuss funding for its burgeoning ‘protest’ movement.

Billionaire Jewish donors including Tom Steyer and Paul Egerman, DA’s treasurer, were on the list to attend the DA meeting.

Third, Democracy Alliance head, Phillip Gara LaMarche, (a typical Gentile shill for the Jews) has worked for George Soros and the ACLU, both militantly active in subverting a Christian-informed society.

WHICH BRINGS ME to the sniper Micah X Johnson’s gripe with Black Lives Matter.

Was he upset because the #BLM flash mob he was expecting didn’t show up at the sound of his rants on Twitter and Facebook to start a race riot?

Well, he certainly will be assured by demons in hell that fellow demons on earth (Jews) are about to create racially-impelled chaos throughout the United States bolstered by Obama and reinforced by Clinton.

It’s no secret that Clinton has placed herself squarely in the arms of “black” interests and (no kidding) a huge black-voter endorsement.

And so dear diary, sad to say, the unraveling of America has only just begun.

For More See: How The Jews Took The White House Click Here

And: Is Michael Brown A National Hero? Click Here