Why The Jews Hate Jesus Christ

Dealing With Jews Who Burn New Testaments, Judaism Articles, Christians NOT Jews Are God's Chosen People!, Jews & Their Guilt Of Deicide, Jews Are NOT The "Chosen People", Why The Jews Hate Jesus Christ 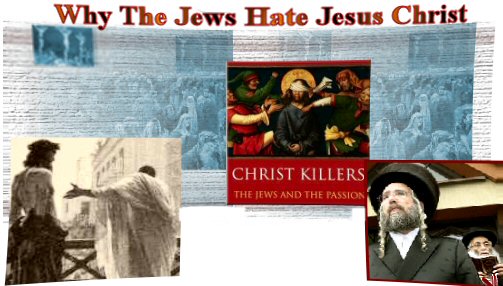 THE ENTIRE WORLD UNDERSTANDS that Jesus Christ is the Jewish Messiah.

Every year at Christmas time we see advertisements to come and hear “Handel’s Messiah.” We all have that wonderful chorus ringing in our ears during the Yuletide season, “For Unto Us A Child Is Born.”

I was raised as a Jew. Both my parents were Jews. I started attending Hebrew school as a toddler. We were forbidden to read the New Testament.

I recall in our 10th grade Sabbath School class of Comparative Religions being told by Mrs. Schecter, “Christianity was invented by a manic depressant named Saul of Tarsus. Therefore we are not even going to bother studying Christianity. We will now go on to the study of Buddhism.”

I was disappointed. I at least wanted to know something about the religion we were not supposed to believe in. Basically we were told in our Jewish circles, “Jesus Christ is for the Gentiles not for us Jews.”

It wasn’t until I started college in 1968 that I was able to buy a New Testament and read about Jesus Christ. I was amazed at how “Jewish” the New Testament was.

And I simply fell in love with the personage of Jesus Christ - what with Him going out to the people, speaking to them in parables, and healing and working incredible miracles.

Most of all I felt deep inside of me that He was one of our own and that he was not just for the Gentiles but for we Jews - yes, primarily, that is “first,” for us Jews. Actually, I wanted Him to be primarily for me.

Soon after my conversion, I joined the Jews For Jesus Movement and hit the streets with tracts like, “Jesus Made Me Kosher,” and, “If Only The Rabbis Knew How Wrong They Are.” Most of the Jews I encountered on the streets were not at all open to even consider the claims of Jesus Christ. One was defeated before he even began.

If they admitted something was true about what you were telling them, the next minute they would contradict it.

I think St Paul was right when he said about the Jews, “You have found yourselves unworthy of the Kingdom of Heaven, from now on I go to the Gentiles!” He also said about them, “They are contrary to all men.” Something perhaps some of you have experienced too?

I HAVE NOW FOUND MYSELF some 38 years later since my conversion to Christianity realizing that the question of Jewish Unbelief goes beyond the Jews’ refusal to believe - to something much deeper, something actually quite sinister.

It’s almost as if their unbelief is not really that, (for it makes them the guilty ones does it not?), - where they are forced to respond, “This belief of yours in Jesus Christ is not something that we subscribe to.”

In other words, it is a defensive position, a position the Jews don’t like to be in. Why? The Jews have an obsession for control - they love, nay, they must, be in charge.

And so we see the Jews moving their negation of Jesus Christ into an outright warfare against Him.

Now they are in control and no longer guilty of unbelief but on a campaign of imposing their will on everyone around them. And this is confirmed by St Paul when he says, “They are the enemies of the Cross.” (Philippians 3).

The Jews hate Jesus Christ because they do not like being in a position of “weakness.” For one to come to Jesus Christ he has to admit that he has sinned and in need of a Saviour and therefore must repent and correct his conduct.

The Jews find this absolutely abhorrent. The Jews do not want a Saviour. They do not believe they have ever sinned. They do not see any need to repent of anything. The Jews simply abhor the idea of getting down on their knees.

Those amongst them, that is, the rabbis & their admirers, who are looking for a “messiah,” want him to be the conqueror of the nations and put them in charge of the world.

There is no such thing as repentance in this their “messianic hope.” And this rabbinic “messianic hope” of conquering the Goyim, funnels down to the secular Jews who give tacit submission to the rabbis.

Jesus Christ was crucified by the Jews. This is an historical fact. For the Jewish leaders brought Jesus Christ to Pontius Pilate with trumped up charges of subversive teachings against the Romans - even when they heard Him say, “Render unto Caesar that which is Caesar’s.”

It is historical fact that Pilate wished to release Jesus Christ but the Jews insisted, “Crucify Him! Crucify Him! His blood be upon us and upon our children!”

Indeed every Jew who persists in his hatred of Jesus Christ, especially the “new enemies” of the Cross:

AND - The Jews who run the Federal Reserve Bank who had John F Kennedy assassinated for signing a bill to have Congress utilize their constitutional mandate to print money without interest; and so on and so forth ad infinitum - has the blood of Jesus Christ on his head and on the heads of his spoiled, pampered, haughty children.