Putin’s Plan To Foil The Jews 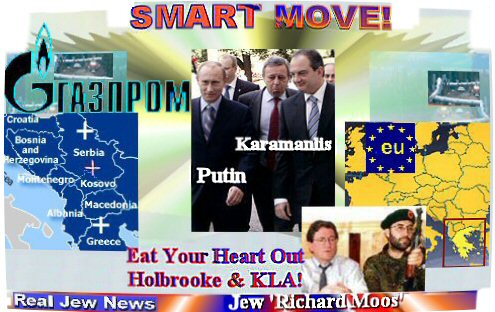 
Richard Holbrooke, a Jew who changed his name from “Richard Moos,” demanded in his 11-25-07 Washington Post article that “the Kosovo Muslims should declare independence from Serbia and ignore a Russian threat.”
(Back To The Brink, Richard Holbrooke)

But the Jew Holbrooke got the heebie-jeebies one week later when he saw that Putin could care less about his demands. For in the Jew-run Council on Foreign Relations (CFR) Holbrooke gave an interview with Bernard Gwertzman, saying: “There is a chance that Serbia could send troops into Kosovo sparking a crises.”
See: “Kosovo Independence Could Spark Crisis” Here 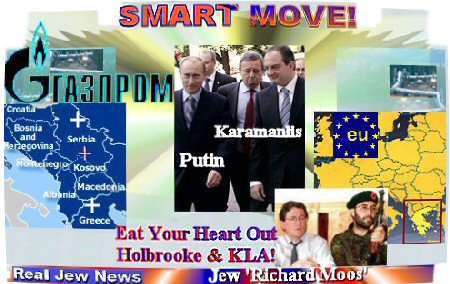 HOW PUTIN IS FOILING THE JEWS

The New World Order Jews like Richard “Moos” Holbrooke want to establish a One World Government. These Jews don’t like upstarts such as Serbia who get in their way. For Serbia (and Russia!) have made it clear that they will not accept a Muslim takeover of Kosovo. For an independent Kosovo will give the European Union and their Jewish bank, the House of Rothschild, control of the Balkans.

So what does the mastermind Vladimir Putin do? He decides to partner with Greek Prime Minister, Costas Karamanlis, to build a Gazprom pipeline through Serbia, into Kosovo, and ending up in Greece - to supply the EU with much-need oil! Ha ha ha!

Here is an excerpt from “Moscow Exploiting Kosovo:”

— “The European Union looks like a bystander to Russia’s capture of energy markets and infrastructure in EU territory. Moscow is using an opening through Serbia, a country that Russia has tempted into isolation from the West by encouraging Serbian nationalism over Kosovo. Putin will meet with Serbia’s president, Boris Tadic, on January 18, 2008 for the signing of an agreement on a gas pipeline project that also involves Greece.” —
See Article: Here 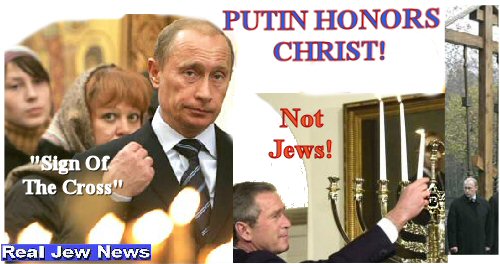 VLADIMIR PUTIN & THE REVIVAL OF CHRISTIANITY

Jews fear strong Christian political leaders like Vladimir Putin who take a stand for Christianity. Methinks that the year 2008 is going to be the beginning of not only pie in the face of the New World Order Jews, but also a backlash against the Jewification of the Western World. And the backlash has begun with Vladimir Putin!