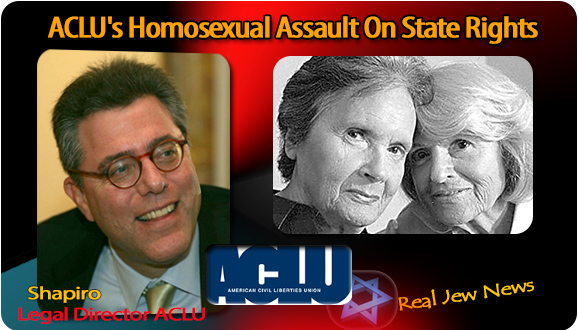 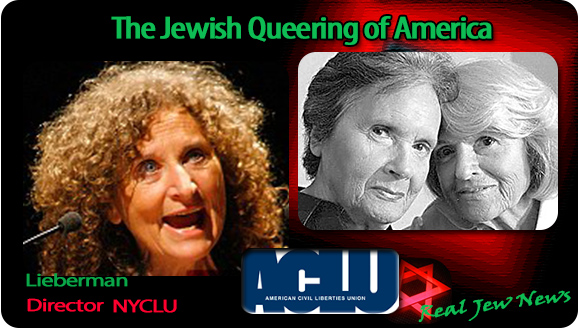 THE QUEERING OF AMERICA is primarily the work of one organization: The Jewish-led and funded ACLU.


With funding from the homosexual-pushing Jew, George Soros, the ACLU was the prime mover behind the Supreme Court’s ruling that struck down the Defense of Marriage Act and is now moving state by state to usher in the complete and total sodomizing of America.

Right on the heels of the Jewish-stacked Supreme Toilet’s ruling, the Jew-oriented ACLU is filing lawsuits against Pennsylvania, North Carolina, and Virginia, challenging their bans on same-sex marriage. 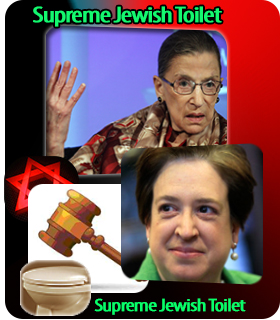 State and national lawyers of the ACLU are teaming up with the Jew-intensive homosexual Lobby, Lambda Legal, to argue against state statutes that deny marriage rights to those engaging in deviant sexual activities.

“The fact the ACLU is turning to the courts to try to redefine marriage takes it out of the hands of the people, said Michael Geer, head of the Pennsylvania Family Institute.

But due to the destruction of Christian sexual mores by American Jewry, any group that uses the word “family” in its title is a prime target of family-hating groups like the ACLU and their Jewish associates at Lamda Legal, the ADL, and the SPLC.

Don’t be misled. The ACLU’s litigation against the NDAA and the Patriot Act is a cover for their anti-Christ agenda. The ACLU has not made a dent in any of these issues and from all appearances has no interest in pursuing further legal action.

The only things the Jew-infested ACLU has accomplished are the removal of Christian symbols from the public square and the promotion of sexual depravity. 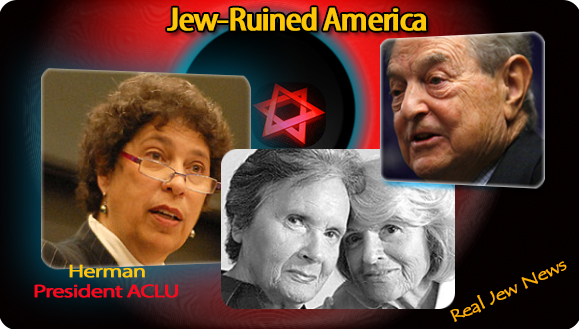 THE JEWISH DESTRUCTION OF AMERICA

DEVIANT SEXUAL BEHAVIOUR has become the new normal thanks to the wicked Jewish programme bent on the destruction of the Christian family in America.

And it looks like the states are going along with Jewry’s demonic agenda.

Attorney Generals of Pennsylvania and North Carolina have both announced that they will not block the ACLU’s efforts to legalize homosexual marriages.

Shame on them for following the lead of US AG Holder in not defending their own States’ laws! They ought to be hung up by their toes.

What does this portend for Jewmerica? … That the wicked Jews—running roughshod over the moral legal framework underpinning a stable, family-oriented society—are succeeding in undermining the Christian foundations of our nation.

And what’s more, American Jewry is bringing on the judgment of Christ Himself over this hapless Jew-ruled country.

God will not be mocked.

Sodom and Gomorrah was destroyed by fire, leaving it a desolate salt pit. Those who know better but do not protest are complicit in the Jewish ruin of America.

If Christians do not speak up against the Jews then the moral cesspool that America is now drowning in will become a physical reality.