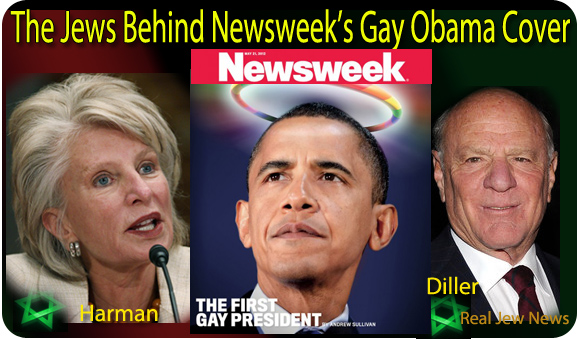 THE TWO JEWS WHO OWN NEWSWEEK in a 50/50 split initiated in April of 2011 are former Congresswoman Jane Harman and Hollywood mogul Barry Diller.

Harman, who retired from Congress in February 2011, straightaway went on to head the Jew-founded and Jew-permeated “progressive” so-called ‘think-tank,’ the Woodrow Wilson International Center for Scholars.

Somehow, Harman managed to inveigle herself into serving as Director, President and CEO all in one kosher bundle.

The Woodrow Wilson Center was founded by Joseph Gildenhorn, a Zionist Jew, who also serves on the advisory board of the Center for Strategic and International Studies (CSIS) and the United Nations Watch, Geneva, Switzerland.

HARMAN’S NEWSWEEK PARTNER, Barry Diller, is one of the top three Hollywood “Gay Power Brokers” — known as the “Velvet Mafia.”

With Harman’s connection to the White House due to her tenure on Capitol Hill; Diller’s links to homosexual Jewish Hollywood; and Gildenberg’s international Zionist networking — all bundled into one strategic Jewish agenda —; a platform to bring Obama “out” into the world of gay peddling and influence is being erected.

And with the mounting of Jewish plans to totally destroy all that is left of Christian morality and sexual mores, only one group rises to the top: Anti-Christ American Jewry.

OBAMA MIRACULOUSLY ‘SAW THE LIGHT’ when “coming out” in support of gay marriage just in time for George Clooney’s Hollywood fundraiser.

No sooner did he make his announcement favoring same-sex marriage on May 9, 2012, than Obama found himself handed $15 million in campaign contributions at Clooney’s Jew-filled extravaganza held at his Laurel Canyon mansion the very next day.

Before an ecstatic group of homosexuals and lesbians, Obama proclaimed: “Yesterday we made some news. We’re not going to turn back the clock. You will no longer be discriminated against based on who you love. [Screams & Howls!] We are moving forward!”

ON MAY 21 2012, Obama is scheduled to appear at a fundraiser in New York sponsored by homosexual supporters. On June 6, he heads back to Los Angeles for a LGBT gala, which organizers say quickly exceeded its 700-person limit after the president’s announcement.

“Gays are the next Jews of fundraising,” declared Rahm Emanuel, when hustling money for Bill Clinton for his presidential campaign back in the 1990’s.

But for Barack Hussein Obama, now swinging on the gold-plated hinge of homosexual campaign contributions, he’s enjoying the best of two Jewish worlds: big bucks both from AIPAC warmongers and Hollywood/NYC Homosexuals Jews.

With 81% of American Jews supporting same-sex marriage, (for Goys not for themselves), Obama—alleged to be a homosexual himself—is clearly siding with Jewry’s ongoing annihilation of the traditional consensus of the White and Black Middle Class.

America is now being eroded by a malignant cancer: the Jewish penetration of every facet of our nation’s society. And now we find our nation’s foremost political leader at the knees of Jewish homosexuals pandering for money and votes.

As it was in Weimar Germany so it is today in America, yet worse. Truly it can be said, “The Jews Are Our Misfortune!”

And: The Jews Behind Michael Jackson’s Life And Death Click Here

And: Who Said…’The Jews Are Our Misfortune?’ Click Here