The Jewish War On Free Speech 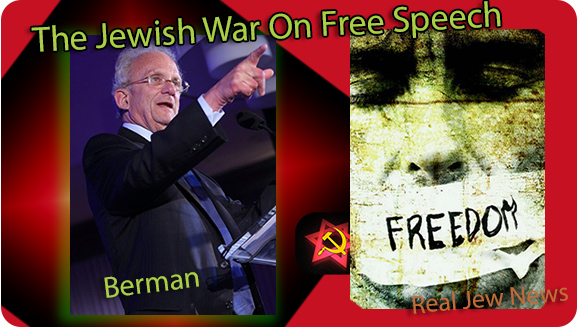 THE JEWISH WAR on free speech continues to be waged on American citizens.


The latest assault by Jewry on freedom of expression is the case of the anti-Israel billboards in Los Angeles, California.

On June 26, 2012, a subsidiary of the CBS Corporation removed 23 billboards in the Los Angeles area that called for a stop to Amerika’s mammoth monetary aid to Israel.

The Coalition to Stop $30 Billion to Israel which sponsored the billboards said in a statement that it received a letter from CBS Outdoor, a subsidiary of the CBS Corporation, stating that their contract was canceled because the Coalition “used the CBS Outdoor name without permission” in its publicity.

The so-called “publicity” was because the Coalition publically thanked CBS Outdoor for initially affirming the group’s First Amendment Right to express their sentiments.

The 23 billboards simply stated: “Tell Congress: Spend Our Money at Home, Not on the Israeli Military.” But Jews fear freedom of expression and launched their assault.

Congressman Howard Berman, whose congressional district includes Los Angeles, and who co-chairs the House Foreign Relations Committee, was offended by the Coalition’s exercise of their First Amendment rights.

— Berman also recently applauded the Senate’s version of the House Bill that declares Amerika’s support and military funding of Israel, specifying Amerika’s affirmation of Israel as a “Jewish state” — contrary to the US Constitution’s prohibition of Congress enacting a law that endorses a particular religious group.

Together with the Anti-Defamation League and Rabbi Abraham Cooper of the Simon Wiesenthal Center—dedicated to hunting down “Nazis”—Berman apparently pressured CBS Outdoor to dismantle the billboards and the company reportedly caved in to the intense Jewish pressure. 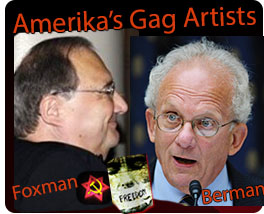 In their place, the pro-Israel group, Stand With US, is planning on erecting a number of billboards calling on Amerikans to support the anti-Christ state of Israel. CBS Outdoor will, of course, gladly welcome their business and will not allow any anti-Israel group to force their dismantling.

Berman and his Jewish comrades denounced the Coalition to Stop $30 Billion to Israel’s billboards as being “provocative” and thus worthy of censure.

This is a typical Jewish response to any message that counters their agenda.

For to “provoke” the citizens of Amerika into thinking for themselves (something impossible for Amerikans to do) is tantamount to a criminal act as far as Jewry is concerned.

Jewry’s latest spokesman in its efforts to justify the criminalization of “provocative” speech is NYU Professor of Law, Jeremy Waldron, a Jew.

Waldron argues in his book, “The Harm of Hate Speech,” now enjoying rave reviews from the Jewish-owned NY Times—”an engaging new book”—that hate speech should be “regulated” in Amerika so as to “protect” members of vulnerable minorities.

Not that Jews care about “minorities,” (I grew up as a Jew and Jews find it abhorrent that they should ever be forced to live in “minority” neighborhoods), but that Jewry wishes to stem rising criticism of Jewish power that threatens their safe haven in Amerika.

Waldron’s initiative would also criminalize the citing of anti-homosexual passages from the New Testament by Christians.

THE JEWISH WAR on free speech is moving full speed ahead.

And all the Amerikans who “love the Jewish people” will soon find not only GAGS in their mouths but the Jewish-enabled privilege of serving time in Amerikan prisons.