The Struggle To Save ‘Inner’ Europe 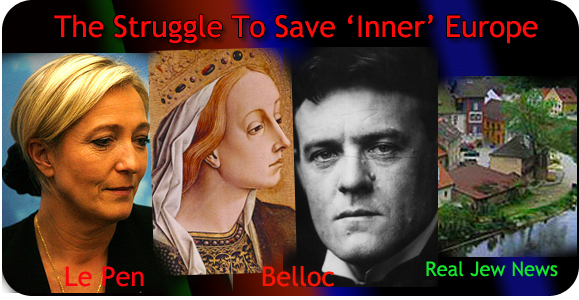 THE STRUGGLE TO SAVE
‘INNER’ EUROPE

THE STRUGGLE FOR EUROPE is personified in the persons of Marine Le Pen of France, Thilo Sarrazin of Germany, and Hilaire Belloc of England.


Marine Le Pen is the National Front candidate for the French presidential election to be decided on May 6 2012. Le Pen is known for her anti-immigration and anti-EU positions.

Le Pen’s stand can best be seen by viewing her co-ordinate activities with the Lega Nord, an anti-immigrant Italian political party, which campaigns for the autonomy of northern Italy.

In 2011, Le Pen visited the Italian island of Lampedusa – which was a focal point of uncontrolled immigration from North Africa – with Lega’s leader Mario Borghezio.

Borghezio has said that Europe must “remain white and Christian.”

In response to Switzerland’s defiance against joining the EU and its recent referendum banning the building of minarets, Borghezio remarked, “The flag of a courageous Switzerland which wants to remain Christian is flying over a near-Islamized Europe.” 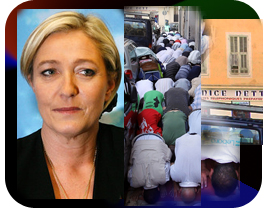 By all appearances, Marine Le Pen concurs with Borghezio’s position.

In December 2010, she compared Muslims praying in the streets of Paris to the Nazi occupation of France:

There are of course no tanks, there are no soldiers, but it is nevertheless an occupation and it weighs heavily on local residents.” View Entire Story Here & Here.

THILO SARRAZIN IS a former executive of the Deutsche Bundesbank.

Sarrazin was fired from the Bundesbank due to his ‘anti-Semitic’ and ‘anti-immigration’ remarks in his 2010 best-selling book, “Germany Abolishes Itself.”

The book was denounced by European Jewry for postulating a “Judeo-Muslim” threat to Europe. 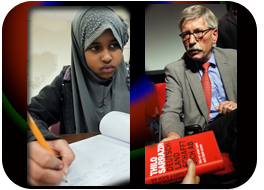 What bothers these eternal enemies of nationalist sentiments is their recoiling over Sarrazin saying that “native” Germans will find themselves “overwhelmed” by Muslim immigrants who “build mosques” while Germany’s Church’s fall into decay. In Sarrazin’s own words:

“I don’t want the land of my grandchildren to become predominantly Muslim or to become a place where Turkish and Arabic are mostly spoken.

I don’t want my grandchildren to live in a country in which women wear headscarves and the daily rhythm is determined by the call of the muezzin.” View Entire Story Here. 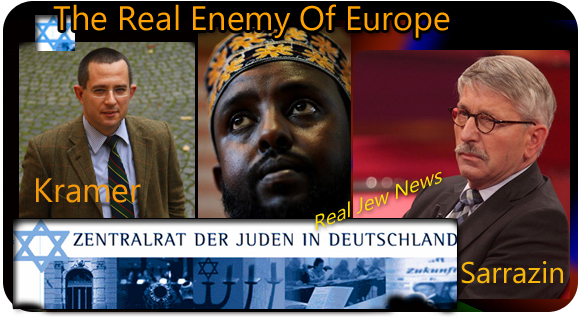 EUROPEAN JEWRY DENOUNCED SARRAZIN as a bearer of “Nazi” ideology, taunting the former finance minister of Berlin that he should “join” the neo-Nazi National Party and condemned him for putting Jews “at risk” due to his calling for a “German” social complexion in which Jews would be looked upon as outsiders.

Stefan Kramer, leader of the anti-German Central Council for Jews in Germany, upon publication of Sarrazin’s book, insisted that Sarrazin be “stripped” of all public honors and that “action” be taken against him for venting “pernicious” opinions. (Crucify Him! Crucify Him! … Sound familiar?)

Kramer, besides advocating flooding once-Christian Europe with Muslim immigrants, is a staunch influential lobbyist ($$$) for “building mosques” next to Christian Churches.

Israel’s envoy to Berlin, Yoram Ben-Zeev, chimed in with fears that: “The Germans, who since World War II have been politically correct about race and religion, with Sarrazin now becoming the trigger, will feel free to openly speak their minds.” (Dangerous stuff for free-speech-hating Jews.)

EUROPE WAS THE CHURCH

HILAIRE BELLOC, now deceased, was a 20th Century political apologist for the Catholic Church, as epitomized in his classic work, “Europe And The Faith.”

In his book, Belloc argues that it was not the Protestant Reformation, (which, according to Belloc, led to the secularization of Europe and the Jewish-takeover of Russia), but the historic Catholic Church that molded Europe into a model civilization.

“Only a return to the Church,” Belloc writes, “can Europe be saved.” And more pointedly, “Europe is the Church and the Church is Europe!” declared Belloc. View Entire Story Here, Here & Here.

(From an Orthodox point of view, only the Pre-8th Century Church in Europe, under the realm known as “Romanitas,” is the essential Church of Europe. This was before the Frankish corruption of the Orthodox Church under Charlemagne in the 8th Century.) 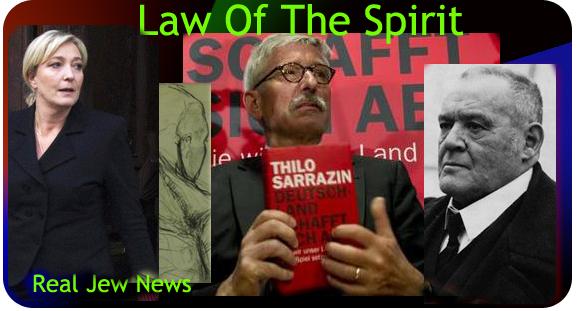 WHAT DO THESE THREE PERSONS have in common?

Although their impact on European society comes from three distinct world views their actions on the stage of history are motivated by a struggle to save Europe.

Perhaps their fight to save Europe can be framed in the context of an “inner” and “outer” Europe … a once fashionable way of describing the period prior to World War I by breaking down Europe into contrasting economic zones. 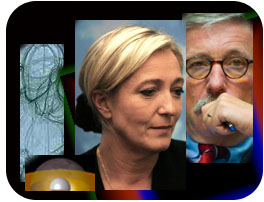 But based on Le Pen’s (an “historical” culturalist) and Sarrazin’s (an “agnostic” culturalist) positions, an “inner” Europe based on history and custom in conflict with an “outer” Europe, in this case, an artificial imposition, is the core of their struggle.

This is not unlike St Paul’s struggle to subject the outer man to the law of the Spirit.

Both individuals and nations—according to their “inner man”—have a destiny to fulfill.

Thus, blaming Muslims for Europe’s plight does not get to the heart of the issue.

The enemy of Europe, if we take Belloc’s analysis as the only credible one, is Jewry, with its powerful lobbies, media ownership, and financial theft of Europe’s treasuries. (German bankers know exactly what I am talking about). And America, the occupier of Europe, is entirely under Jewish control.

For after all, the eternal enemy of the Church — I mean, Europe — is the Jew…

And: The Real Issue Of Jewish Genes Click Here