Brother Nathanael: The Jewish journalist, Jonah Goldberg, wrote an article last week for the LA Times titled “Glenn Beck’s Ecumenical Moment” in praise of Beck’s rally in DC. What are your thoughts on this?

Kevin MacDonald PhD: First of all, before I get to Goldberg, the massive crowds of White people that came to Beck’s rally who are worried about their future as “Whites” are being lulled to sleep by this new Elmer Gantry.

All that implicit Whiteness showed up with no place to go. When Whites put on a rally for an overwhelmingly White constituency, they feel a need to pledge allegiance to America as not really having an ethnic identity.

Hence the need for a flood of non-White speakers that Beck waltzed out onto the stage.

As for Goldberg, he displayed his true Jewish intent by being thrilled that Beck isn’t hitting on the real issues that are causing deep anxiety and anger among Whites.

Kevin MacDonald: Goldberg highlighted the fact that although the crowd was “preponderantly white” - the message was “racially universal.”

This is the Jewish dream of a multicultural America where everyone gets along as one big happy family. It’s the impossible dream that ignores racial realities, such as IQ differences that inevitably result in racial stratification in the absence of enormous, resentment-inducing government efforts.

The pathetic thing is that Beck is leading the charge into this impossible harmonious future under the banner of Tea Party conservatism.

Br Nathanael: Getting back to Goldberg, does he have any sympathy for White interests?

Kevin MacDonald: As a Jewish ‘intellectual,’ Goldberg is horrified at any suggestion that Whites will define themselves as ‘Whites’ and seek to advance their interests.

In his article, Goldberg wrote: “I find Beck’s populism terrifying. But his basic message, flaws notwithstanding, is that our constitutional heritage defines us as a people regardless of race, religion or creed.”

What Goldberg is not admitting is that Jews refuse to be thrown into this “people-pudding” — they remain a people apart — but relish the fact that Whites will lose their identity and their consciousness by being tossed into this multicultural mush.

Thus, our new Elmer Gantry is praised by Goldberg and the Jewish crowd he represents since Beck preaches the proposition nation gospel that assigns Whites, not Jews, as water boys of slogans and cliches rather than bearers of blood and soil.

Br Nathanael: It was Fox News that sponsored the Beck rally and its message. How can we break through the media control of discourse on racial issues?

Kevin MacDonald: I don’t have any easy solutions. That’s what makes the Glenn Beck phenomenon so pathetic.

Here’s a guy who has an immense following of angry White people yearning for leadership that would really help their plight. And all he can come up with is a vague commitment to traditional values and the Constitution.

What matters to Whites is that they are becoming a minority and seeing their cultural and political power disappearing — in spite of Beck calling the rally “non-political” and stopping the attendees from bringing “political signs.” That’s part of the treachery.

And all of Beck’s talk about the Constitution is just another strain of the serenade. The Constitution will be completely irrelevant when Whites become a minority.

Br Nathanael: What about Beck’s appeal to religion and the founding fathers? Isn’t this part of White tradition?

Kevin MacDonald: Beck’s altar call to “turn back to God” is red meat for the Tea Partiers — guaranteed to bring tears to the eye.

But the pleas to religion and the founding fathers are just another version of the proposition nation creed: All will be well if we accept a certain set of universal ideas with no ethnic content.

Br Nathanael: But isn’t turning back to God a good thing for America?

Kevin MacDonald: Which “god?” In what “history?”

During Beck’s “turn back to God” speech, he placed behind him a rabbi, a Native American, and a White.

Turning to them with arms outstretched, Beck proclaimed: “Here are God’s chosen people, the Native Americans, and the pilgrims. When people came together of different faiths, the first thing they did was to pray together.”

Rewriting history and remaking ‘god’ to suit media dogma is certainly not the mark of the kind of leader Tea Party Whites are craving for.

Br Nathanael: Do Whites realize they are being betrayed by Beck?

Kevin MacDonald: I think for now Whites only realize that they are coming up empty but are not sure why.

Beck’s attendees were overwhelmingly White because Whites are angry and deeply anxious about their future as other groups expand their power and as Whites are increasingly victimized as Whites, in everything from affirmative action to violent crime.

But Whites can’t explicitly state that this is a war against them. So they end up pledging allegiance to the very things that are dispossessing them. 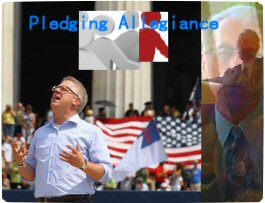 The worst part is that it gives Beck’s gullible audience hope that there are easy, painless solutions. We can do it if we just BELIEVE.

Br Nathanael: What can White Americans do to salvage their plight?

Kevin MacDonald: Whites have first of all got to clearly define for themselves and then as a bloc what their concerns are and insist that ‘leaders’ specifically articulate their issues.

But at present, they just can’t seem to break with the ruling ideology, of which, Beck is the leading pulpiteer.

Until they do, Whites will just keep on losing and getting more and more desperate.

And that, in a nutshell, is the argument of the American Third Position Party, of which, I am on the Board of Directors. I invite your readers to check us out.

And: The Jewish Conspiracy Behind The Open Immigration Law Of 1965 Click Here