The Jews Behind Michael Jackson’s Life And Death 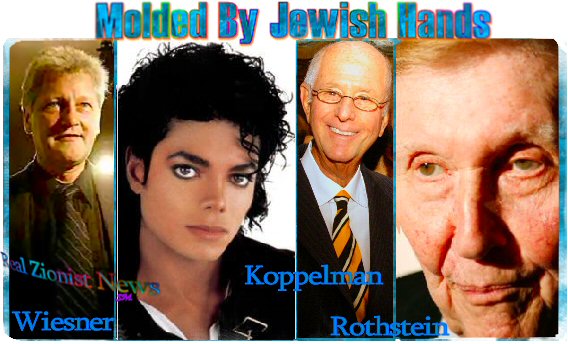 THE JEWS BEHIND
MICHAEL JACKSON’S LIFE AND DEATH 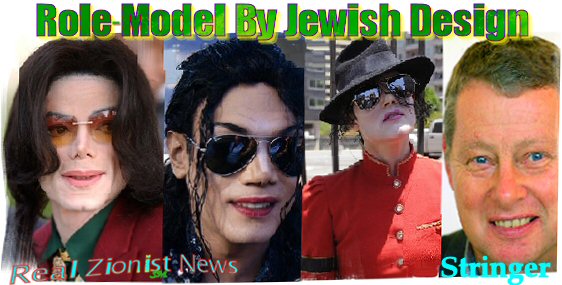 Rather than that of traditional sexual mores, the slew of Jews behind Michael Jackson’s career could be said to have advanced the plan of corrupting today’s youth as laid out by the renown Protocols Of The Elders Of Zion.

From his record label moguls to his business manager, from his lawyers to his personal confidants, and even to his dermatologist, Michael Jackson chose to surround himself with a crowd of money-hungry Jews who viewed Michael, not as a human being, but as a piece of merchandise to be used for financial gain.

For if a role-model who presented himself as an androgynous ‘boy-girl’ symbol could generate millions of dollars, then Michael Jackson’s Jewish handlers would not scruple to forego warning him of his ‘artistic’ persona’s destructive path which led to his ignoble death on June 25, 2009, by a drug overdose. 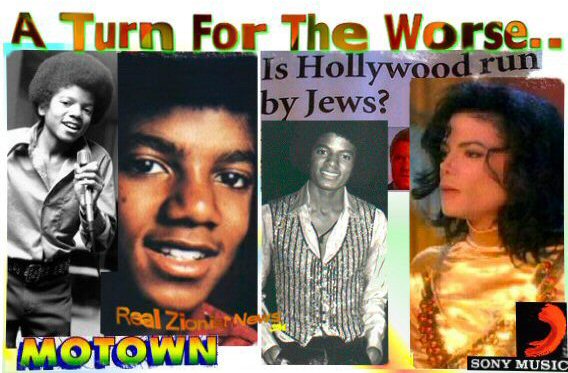 WITH THE HOLLYWOOD RECORD INDUSTRY dominated by Jews, Michael Jackson’s career accelerated to new heights when he left Detroit’s black conservative Motown Records and signed on with the Jewish mega-media conglomerate, CBS Records in 1975. CBS Records was later renamed Sony Music Entertainment in 1991, (still under Jewish control), with a host of subsidiaries, including Epic Records, Jackson’s label.

Leaving Motown founder Berry Gordy and singer Smokey Robinson, who were his conservative black mentors in Detroit, Michael Jackson was now under the influence of Hollywood Jews and the slew of Jewish serviles attached to the Hollywood record industry. 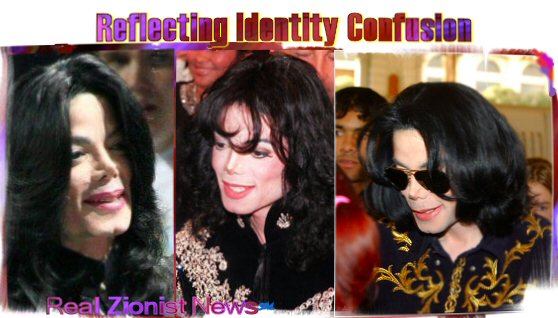 MANY ARE OF THE OPINION that due to the decadence and perversity that the Jews of Hollywood promote, Michael Jackson’s life took a turn for the worse. For it was after his move from Detroit to Hollywood that Michael Jackson changed his appearance into a ‘boy-girl’ image through plastic surgery.

Soon following his new ‘androgynous look,’ Jackson was charged in 1993 with sexual abuse by Evan Chandler on behalf of his 13-year-old child, Jordan Chandler. (Jackson and Jordan had become friends in May 1992, much to the father’s disapproval and concern.)

Then in 2003, Jackson was charged with nine counts of molesting a 12 year old boy. Indeed, after his move to Jewish-run Hollywood, Michael Jackson’s life took a nose dive into the pit of perversity. 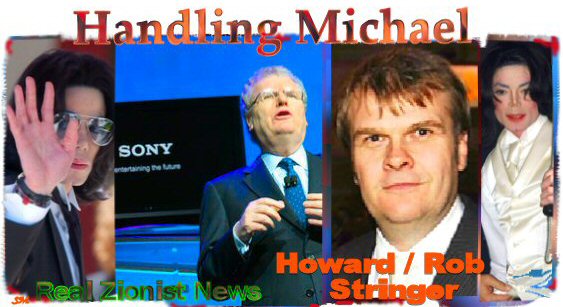 UNDER THE JEWISH INFLUENCE of one of the most powerful figures of the music business, the Jew, Rob Stringer, Chairman of Sony Music Label Group and its Epic Records label, (Jackson’s label), Michael Jackson’s career skyrocketed into a legendary ‘King of Pop’ scenario.

Rob Stringer, (the younger brother of the Jew, Howard Stringer, who is Chairman and CEO of Sony Corporation), is now involved in a $50 million agreement with AEG Live, Twentieth Century Fox, MTV, and Paramount Pictures — all Jewish companies — for distribution rights to a documentary about Michael Jackson’s final days.

In other words, the insatiable lust for the money that Michael Jackson can generate even through the unsavory circumstances of his death, continues by the Jews of Hollywood. This has been affirmed by Jackson’s music & financial manager, the Jew, Charles Koppelman, who said shortly after Jackson’s death, “Michael could generate more money now that he’s dead than when he was alive.”

MICHAEL JACKSON’S TIE TO JEWISH INFLUENCE did not end with the Jewish moguls of the Hollywood music, film, and video industry - rather - this is where the destructive influence in Jackson’s life all began.

For not long after leaving his conservative black mentors at Motown Records in 1975, Michael Jackson was placed under the Jewish influence of the high-powered global Business Manager, the Jew, Dieter Wiesner.

On his Website, Wiesner, who was granted by Jackson the ‘Power Of Attorney’ for all of his affairs, boasts that he formed a “new and excellent team of advisors and lawyers around Jackson that came up exactly to Michael Jackson’s conception.”

A cursory glance at the list of Jackson’s “excellent team of advisors and lawyers” shows that the names indicate a strong Jewish influence of Michael Jackson’s legal affairs which penetrated deep into the most intimate parts of Jackson’s personal life.

Is it any wonder then that Michael Jackson reacted so virulently to this destructive Jewish influence when he later described two Jewish business associates as “leeches” and penned the stinging lyrics of his 1996 rap hit, “They Don’t Care About Us”, singing, “Jew me, sue me, Kick me, kike me.” View Entire Story Here.

‘An Obsession With Children’

“WE USED TO HAVE MICHAEL OVER FOR SHABBAT DINNERS,” recalled Rabbi Shmuley Boteach in his reminisces to the Jewish Telegraph Agency about his “warm relationship” with Michael Jackson which began in 1999.

Rabbi Boteach, in his efforts to convert Jackson to Judaism, escorted him to the Carlebach Shul in Manhattan in 1999. At the synagogue, Boteach introduced Jackson to the Jewish psychic Uri Geller, with whom the rabbi enjoys a very close business relationship. (Jews are always looking for ways to make money out of their ’spirituality’ and connections, like superstar Michael Jackson.)

Geller, (born in Tel Aviv - now residing in England), seeing dollar signs all over his newly found friend, began courting Michael Jackson, even asking him to be his ‘best man’ at his wedding in 2001. Then in 2002, Geller found his opportunity to capitalize on his growing friendship with Jackson.

Geller negotiated for a huge amount of money, the now famous TV interview between Jackson and journalist Martin Bashir: “Living with Michael Jackson.” Michael agreed to the interview, but it all turned against him, when Bashir added much commentary which was very critical of Jackson.

UNEASY WITH MICHAEL JACKSON’S apparent obsession with children, Bashir repeatedly questioned a silent Jackson why he invites children into his room.

Jackson finally defended himself stating that such activity is natural when the children are of close friends or family, and that “many children” have slept in the same bed as him. View Michael’s Strange Relationship With Children Here & Here.

Bashir then challenged Jackson on the little known 1993 Child Sexual Abuse Accusations Against Michael Jackson. Pressing Jackson to respond to the accusations, Jackson refused to answer but did admit that he paid the accuser an out-of-court settlement.

In the 1993 case, Jackson was accused of molesting 13-year-old Jordan Chandler. The boy first told his father that Michael Jackson had touched his penis.

Jackson agreed to a strip search, which was required to see if the description of his genitals provided by Jordan Chandler was accurate. Doctors concluded that there were strong similarities. View Entire Story Here. 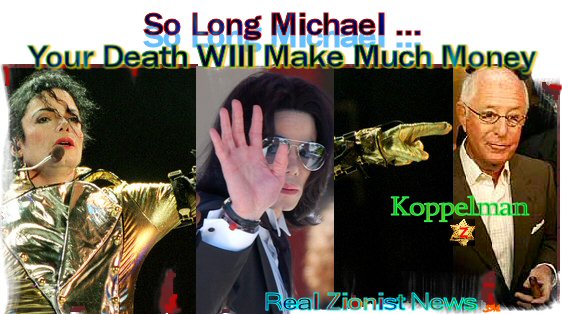 THE UPSHOT OF MICHAEL JACKSON’S CAREER as the ‘King of Pop’ is that it was the crass ideology of the Hollywood Jews that encouraged Michael Jackson’s dubious life-style and questionable activities.

And: Not Just Hollywood! - The Jewish Question Is Now A Global Issue Click Here