Why Jews Don’t Move To Zion

The Jews - Their Lies - Their Critics, Why Jews Don't Move To Zion 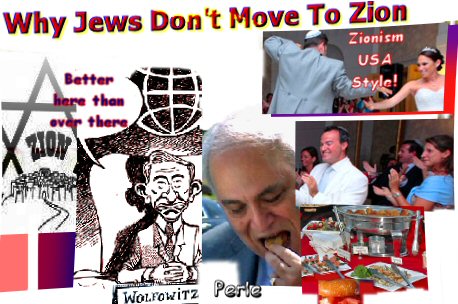 Or Send Your Contribution To:
Brother Nathanael Kapner; PO Box 547; Priest River ID 83856
E-mail: bronathanael@yahoo.com
EVERY JEW AT HEART is a Zionist. Do not believe the Jews when they say they are against a Zionist State. What they really mean to say in their patronizing way: “I am against intolerant behaviour towards the Palestinians. We should treat Arabs better.”

Yes - Jews do indeed favour a Jewish State of Israel even though most of them don’t live there. Do not believe Jewish-provided statistics. The Jews whom they state live in Israel, in reality, have a double citizenship whereby many of them reside in America & Europe with “vacation homes” in chic Tel Aviv and fashionable Jerusalem. Factual statistics, (not those provided by Jews), demonstrate that 60% of Jews reside in America, 20% in Israel, and the remaining 20% reside mostly in Europe.

Now let’s get down to the nitty gritty. Why did World Jewry, that is, the Rothschild Banking Cartel, through their pawn Chaim Weitzman, strike a deal with Great Britain in 1914 which conferred on them the Balfour Declaration in 1917? Did the Jewish power brokers really want Palestine in order to make it possible for the ‘persecuted’ Jews of every nation to move to one place? Ha ha. You’ve got to be kidding!

The myth of the ‘persecuted’ Jew has played itself out by now, especially when we observe Jews living the “good life” — even in times of economic downturns. What the Jews were really after in the so-called “return of the Jews to their homeland” — was to establish a center of power that would provide Jews throughout the Diaspora, primarily in Christian Europe and America, a legal and governmental base.

And from this ‘legal’ and legitimized base, to infiltrate all nations with embassies and ambassorships. For in this embassies lurk Mossad agents who are hiding behind “credentials.”

A relatively small, purely Jewish state in Palestine would provide the powerful Jewish groups in other nations with the status of a respectable minority; diplomatic representation; the right of asylum; and most important, access to the highest realms of political power and influence. Well isn’t seeing all of the Jewish neo-cons, like the Zionists Richard Perle and Paul Wolfowitz, who are among President Bush’s policy makers, enough to convince us of this?

And why doesn’t Perle and Wolfowitz and the rest of the Zionist Jewish neo-cons just pick up and move to Israel if they love it so much and want all the rest of us lemmings to love it too? “Life is too good here in America that’s why!” they would answer. “And besides,” so the Jews think, “a person could get hurt over there.”

But yet with all of the wealth and influence that Jews enjoy in their host nations like America and Europe, they still cling to their grasp of a tiny strip of land in the Middle East. Why?

You see, the Jew is essentially a paranoid person. The Bible predicted this when it asserted that because of their unbelief in Jesus Christ they would be “wanderers among the nations.” And as “wanderers,” so the Bible says, the Name of God would be blasphemed by them.

Do we not see this in Christian America and Christian Europe today? For the Jews despise the idea of a Christian civilization. This scares them.

For with a strong, established Christian civilization existing in their host nations, the Jews will be forced to admit that they will under no circumstances believe in Jesus Christ and become Christians as they should — even in the face of the most convincing proofs of their need to repent and embrace Christ and His Church. They will be forced to face the accusation that their leader crucified the Lord Jesus Christ and that they need to repudiate their forefathers’ crime of all crimes.

Yes, the Jews are a paranoid bunch. All of their hopes for the future are not centered on the Kingdom To Come for which Christians pray. No, the Jews have their hearts set on a “kingdom of this world.”

And their perpetuity is centered around their little “Jewish princesses” and their “darling little Jewish boys” whom they hope to become doctors, lawyers, and in these modern Jewish times, political advisors.

“If a persecution should break out against us in the future,” the Jew broods over, “where will my children go? Aha! To Zion they shall go! But for now, I like my country clubs, my Chinese Restaurants, and the opportunity to impose my will on all the dumb Goys around me.”