How The Jews Think - Pt III 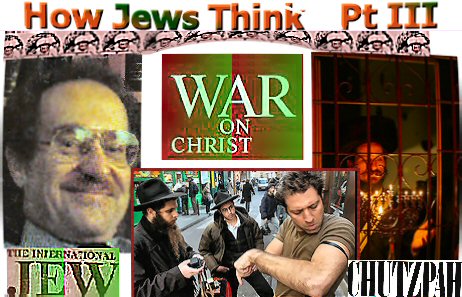 HAVING GROWN UP AS A JEW and having gone to an upper middle class synagogue throughout my childhood up through my young adult years, I am uniquely qualified to do an expose on the inner workings of the Jewish mind. Now that I am an Orthodox Christian, having converted in 1971 to Christianity, I can see very clearly how the Jew thinks:

1. The Jew is a perpetual outsider. The Jew is a ceaseless “observer” and consequent “actor” & “reactor” upon the world’s stage. The Jew seeks to impose his will upon the Gentile whom he looks down upon as being inferior in intelligence and activism to him.

2. The Jew is always on a “mission.” The Jew always has a “cause” he must fight for. The mission and the cause of the Jew is hostile to the mission and cause of Jesus Christ and Christianity.

3. The Jew wishes to remain aloof and separate from the nations. That is why Winston Churchill initially used the term, “The International Jew.”

4. The Jew holds himself separate from the nations, not primarily for ideological reasons as prescribed in the Old Testament. Rather, the Jew remains aloof from all others because he sees himself as belonging to an elite.

5. The Jew may proclaim and propagandize though his monopoly of the Media the slogan, “Diversity Is Our Strength!” Yet the Jew will never live in a neighborhood where poor Blacks, Asians, and Hispanics live. Why not? Because the Jew despises working class folk as being culturally inferior to him and socially impotent.

7. The Jew wants nothing to do with Jesus Christ, the Church, and the Christian Universal vision of the new man in Christ. Why not? First because Jesus Christ calls all men to repent which the Jew finds repulsive; Second because the Church with its eyes set on the kingdom to come is disagreeable to the Jew who seeks a kingdom of this world; Third because the new man in Christ whereby all elitist distinctions are dissolved, is an identity the Jew finds repugnant to his love of ’separateness’ and control over others.

8. The Jew, through his monopoly of the Media, the Judicial System, and Academia, wars against Christianity. Why? Because Christianity indicts the Jew as being unrepentant. This puts the Jew in a position of weakness and beholden to the dictates of the Christian. The Jew considers this the greatest of all calamities.

9. The Jew falsely believes that he is part of the “chosen people.” Thus the Jew deems that he has the “divine right” to have his “rights” implemented and secured. In fact, the Jew with his yiddishee chutzpah demands this. What are the Jew’s rights as he perceives them? First and primarily, that the world around him should conform to his point of view and to his point of view only.

10. The Jew will ignobly hold on to his identity unto death. To die for the truth rather for one’s racial identity is a valid martyrdom. But “truth” for the Jew is not in the realm of absolutes. “Truth” for the Jew is to assert and impose his will upon others. And what is the Jew’s will? That Jesus Christ is not be loved, believed in, and worshipped.