Unique Source: Sarkozy & The Zionist Bankers @ Rense.com Here
TURNING FRANCE INTO A ZIONIST POLICE STATE is the order of the day for French President Nicolas Sarkozy.

A police database that will store personal details including opinions, the social circle, and even sexual preferences of anyone aged 13 or above who is “likely to disturb public order” was to be installed by Sarkozy in early September of 2008. Protests by tens of thousands of French citizens has postponed the spy system’s implementation.

The surveillance system, called Edvige, was completed in July of 2008, and has been dubbed, “Sarkozy’s Big Sister,” due to its name, “Edvige,” which is a woman’s name. Sarkozy’s Big Sister has the capabilities to track anyone active in politics, trade unions, or who has a significant role in social or religious institutions.

Herve Morin, the Defense Minister, broke government ranks to side with a growing revolt against Sarkozy’s Big Sister. “Surely this is a strange mixing up of categories,” said Mr Morin. “Is it useful to gather data such as one’s social circle & sexual orientation without knowing exactly what is the point?” 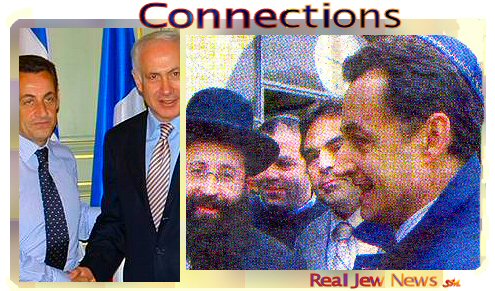 JEWISH ANCESTRY RUNS IN THE FAMILY of both Nicolas Sarkozy and his wife, Cecilia. Sarkozy’s mother, (by which Jews trace their supposed ‘Jewish blood line’), is of Greek Jewish origin, who was born to the Mallah family, one of the oldest Jewish families of Salonika, Greece.

His wife, Cecelia, is of Jewish-Spanish ancestry. In 2004, Cecelia Sarkozy made a point of saying, “I do not have a drop of French blood in my veins.”

Given Sarkozy’s Jewish roots, it is not at all surprising that he has a special “sympathy” for the Israeli Zionist cause. In an interview Nicolas Sarkozy gave in 2004, he sounded like a typical Zionist Jew:

“Should I remind you of the visceral attachment of every Jew to Israel, as a second mother homeland? Every Jew carries within him a fear passed down through generations, and he knows that if one day he will not feel safe in his country, there will always be a place that would welcome him. And this is Israel” Here.

“The two developed a close friendship with similarities in their ideology and politics. If Netanyahu returns to Israel’s chief position it will be interesting to see whether their personal dynamic will lead to a fresh start for Israel and France and a more constructive European role in the region” Here. 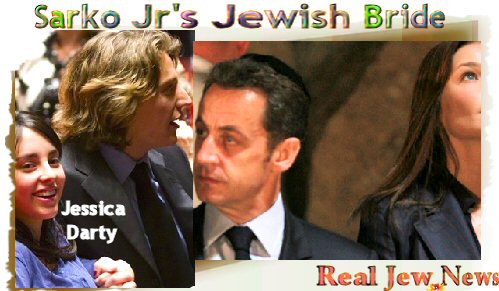 MAKING SARKOZY’S JEWISH CONNECTION complete, on September 10 2008, Sarkozy’s second son, Jean Sarkozy, married Jessica Darty, a member of a prominent French Jewish family that founded Darty Electronics Chain, one of France’s biggest retailers. According to the French press, the couple made a trip to Israel in June of 2008 “in order to learn more about Jewish culture.”

During their engagement, Maurice Sinet, a veteran cartoonist for the satirical magazine Charlie Hebdo, wrote an article saying that “Sarkozy Jr has just said he intends to convert to Judaism before marrying his fiancee, who is Jewish, and the heiress to the founders of Darty. He’ll go a long way in life, that little lad.”

Sinet was fired by the magazine’s editor, who said his remarks “could be interpreted as drawing a link between conversion to Judaism and social success.” The International League Against Anti-Semitism has brought a court case against Sinet for “incitement to racial hatred.” The trial began in early September of 2008. Sinet refuses to apologize to the Jews.

And Why Should Sinet Apologize?
Just Because Zionist Jews Wage War On Freedom of Speech
Does Not Give Them The Right To Censure Constructive Criticism!