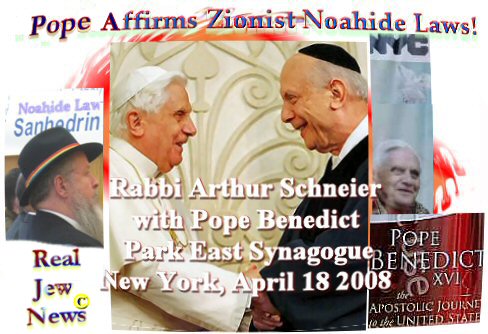 
Following in the steps of his predecessor, Pope John Paul II, who officially recognized modern day Jews as the ‘Chosen People of God’ Here, Pope Benedict is fulfilling the same role of pandering to the Jews.

In his recent visit to America from April 15-20 2008, Pope Benedict met with representatives of the Jewish community on the eve of the Jewish Passover on April 18 2008 at 5 PM Here and reiterated that they are God’s “chosen” - of which any thinking Sunday School student would easily refute Here! The Pope said:

— “Shalom! It is with joy that I come here just a few hours before the celebration of your Passover to assure you of my prayers as you recall the wonders God performed in liberating His *chosen people.*” — Here

In a Bilateral Commission Meeting between the Vatican delegation and the Chief Rabbi Shear Yashuv Cohen in Jerusalem in 2007 Here an agreement was made which recognized that “Jewish tradition emphasizes the Noachide Covenant as containing the universal moral code which is incumbent upon all humanity.” (Cf Genesis 9).

So then? Not only are Jews “absolved” by the Vatican of their guilt for crucifying the Messiah Jesus — now Pope Benedict recognizes their leadership since they are the “Chosen People of God” and that the “Noahide Laws are Jewish tradition.” Hence who will ultimately be the moral authority that governs the so-called Noahide Laws? Jews, that’s who. Anti-Christian Jews! 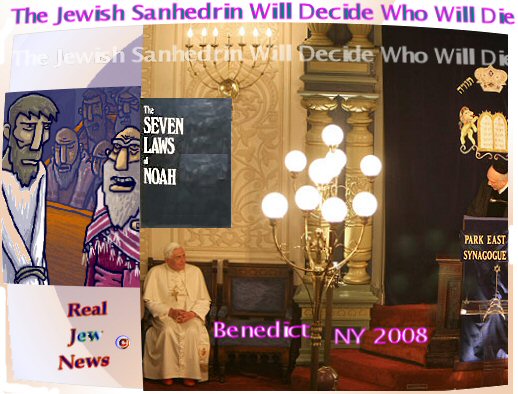 This Congressional Act potentially gives the Jews the legal right to imprison and condemn to death Christians as “idol worshippers” according to the 1st Article of the Noahide Laws which considers the worship of Jesus Christ as “idolatry” for worshipping a “false god” HERE.

The Jews call this article of the 7 Noahide Laws, Avodah Zarah, enunciating it as a commandment: “Do not worship false gods as idols” Here.

The bottom line is that this ultimately means the international imposition of the Noahide Laws by Jews. And these Noahide Laws, which potentially can condemn Christians to death, will be governed by the Zionists who are given ownership over these laws by both the Vatican and the US Government.

Indeed, the ancient Jewish Sanhedrin that condemned the Lord Jesus Christ to death was recently reinstituted in Israel Here & Here. And the newly-instituted Sanhedrin wasted no time in arrogating to themselves governance over the Gentiles vis-à-vis the Noahide Laws Here.

We must all do everything in our power to stop the Anti Christian Jews with their wicked Noahide Laws now before it’s too late!