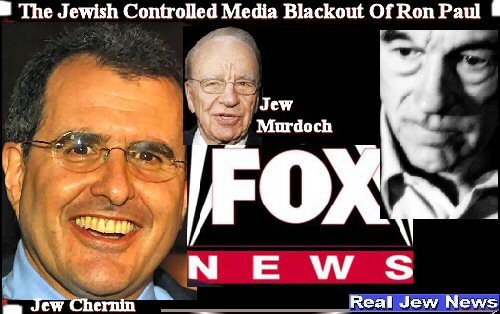 THE JEWISH MEDIA BLACKOUT OF RON PAUL’S CAMPAIGN
By Brother Nathanael Kapner - Copyright Â© 2007
All Articles May Be Reproduced Only With Authorship & Link To Real Jew News
(Plagiarists Like “Roy Roger” Take Notice!)

THE JEWISH-CONTROLLED MEDIA WILL EITHER SMEAR OR IGNORE a Presidential candidate they don’t like. Ron Paul is now on the ignore function of the Jews who control the American media.

Fox News is run by Jews. Fox News has decided to exclude Ron Paul in their upcoming Forum of Republican candidates in the New Hampshire Primary. The Forum is slated to be broadcast by Fox News on January 6, 2008. See “Exclusion Press Release” HERE

The Jewish-run Fox News Channel has been pushing the Jewish neocon agenda that controls both the Bush Administration and US foreign policy with regard to Zionist interests world-wide.

THE JEWS WHO RUN FOX NEWS

* Rupert Murdoch: His mother, (by which Jews trace their racial designation), is the Jew, Elisabeth Joy Greene. 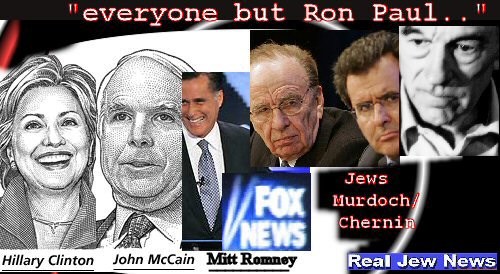 JEWS HAVE RUINED DEMOCRACY IN AMERICA

DEMOCRACY ONLY WORKS when Jews are not in control of political campaigns. Here’s how the Jews have destroyed democracy in America:

* THE JEWISH-CONTROLLED MEDIA decides what political candidates will get coverage and what opinions the masses should have regarding these candidates.

Because the Jews hate Ron Paul they are donating $$$ to the also ran Republican candidate, John McCain. Is it any surprise then that we now see John McCain’s picture splattered all over the news these days?

* THE JEWISH-CONTROLLED PRESS, because they hate Ron Paul, omit him as a candidate. The Wall Street Journal, in their recent article “A Snapshot of the Presidential Campaign” HERE, every single candidate is listed *except* for the front-runner Ron Paul! 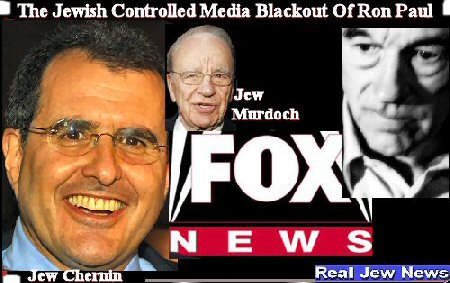 1) Ron Paul is against the Zionist-promoted War in Iraq.

2) Ron Paul is against the Jewish-owned private banking consortium known as The Federal Reserve Bank.

Until Americans wake up to the fact that Jews do not care about anyone but themselves and what serve *their* interests, we will have a Jewish-run government.

And until the Jews become Christians like Ron Paul, and are chased out of politics, *no* Presidential Campaign will be “democratic.” Candidate Ron Paul Take Notice!
–
Brother Nathanael…Street Evangelist!